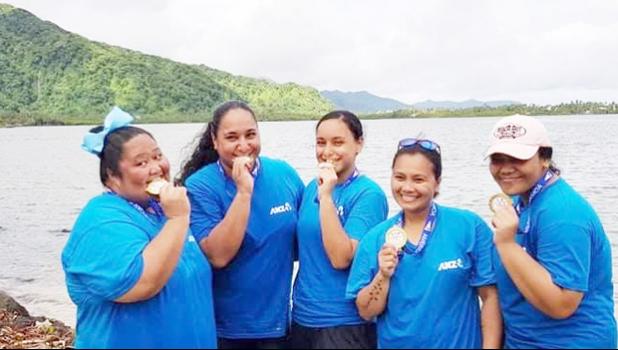 PALA LAGOON — Alo O Samoa Outrigger and Au Va’a Laumei Outrigger Canoe Club co-hosted the first Paddle Battle Novice Invitational in the Pala Lagoon Saturday, Nov. 21.  Over 80 paddlers, spanning across 19 teams raced in the inaugural event.  The team representation ranged from corporate groups to families and adult to youth racing a 250-meter straight sprint in open categories for men, women, and mixed teams.  Teams were given the opportunity to train for the event with 3 training sessions and 2 fun races offered in the 5-week lead up to the race.

Paddlers were provided with event shirts printed by Tutuila Printing Shop, and promo goodies donated by Neil’s ACE Home center.  All paddlers were entered in a paddlers-only raffle with prizes donated by Turtle and Shark Gift Shop and Pacific Energy.  The race lunch was catered by Slimmer Stronger You.

The Manua’s team edged out Paramount by less than second to take the gold in the men’s final race with ANZ taking the bronze over the U20 National Men’s Handball team.

ANZ women paddled their way up through the semi-finals to earn the spot in the finals and took the gold over the U16 National Women’s Handball Team.  Manua’s women edged out Carl’s Jr team for the bronze.

In the mixed final, Manua’s team took gold with a strong finish over the U20 National Mixed Beach Handball Team who were followed by Friends of Amata with the bronze and ANZ.

A special prize was awarded to the U20 National Mixed Beach Handball Team for the fastest time achieved on the course during the race.  The paddlers hit a time of 1 minute and 15.27 seconds in their semi-final

“I think both of our clubs are very excited by the turnout of competitors and supporters today,” said Paddle Battle race coordinator Erika Radewagen.  “We wanted to start out with an invitational this time to reintroduce paddling to our Tafuna and West Side groups who find it difficult to get down to the Harbor for evening practices after work.  We also wanted to see how successful this course and venue would be and we are all very happy with the results.”

“It’s encouraging to see people returning to our traditional sport of va’a.  As a steerer for the race it was great to see the park alive with hundreds that came out to paddle and support the races” said American Samoa Association of Paddlers President Faitoto’aetasiolefaleomavaega Nicholas King.  “As a paddler for many years I’m always happy to steer at paddling events that give both young and old access to activities that provide a fun workout” shared King who is also a member of the Obesity Awakening Movement (OAM) task force that is working on fighting the widespread obesity problem we, the community, are facing in American Samoa.

Finally special thanks to the Department of Parks and Recreation for supporting this event.