Phase One of the 2021 National Street Handball Championship Series concludes 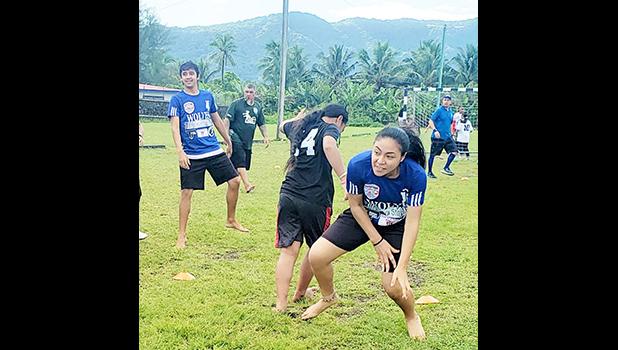 Entering their very competitive and entertaining game on Tuesday, The Mighty Lupe and The Wolves were both undefeated.  After a tough seesaw battle at the beginning of the game, The Wolves began to pull away. The Wolves offensive play of Dianne Loe and Josh Magele with Alama Tatofi, Noreynia Poliko and Amelie Chen’s defense held the high scoring Mighty Lupe in check to win the game.

The second game of the double-header was also highly competitive. The Mighty Lupe took the first half, 6-4, in a very tough low scoring defensive battle featuring two of the 2021 Phase One Handball Nationals top defenders; Jason Bai of The Mighty Lupe and Amelie Chen of The Wolves.

These wins placed The Wolves on top the standings 4-0 with two games remaining against Team Malosi. The Mighty Lupe fell to 3-2 with one game left against The 300.

Team Malosi and The 300 squared off in another epic battle with Team Malosi earning the first half win, 13-12. The 300, behind the standout all-around play of Maea Loe and Saitupu Seui, forced another overtime shootout with a 12-11 second half win.

The shootout opened with Team Malosi’s Tia Nash-Cummings scoring on a well-executed shot and her teammate, Summer Samuelu blocked all four of The 300’s shots in her first full game as the goalkeeper.  The score remained 1–0 after two misses by Team Malosi until Tusi Aniseko, the final shooter for Team Malosi scored.  Down 2-0, The 300 failed to execute a 2-point shot, and the game was Team Malosi’s first win. Samuelu also scored 7 points in a strong individual effort.

The last game of the day was the first meeting of The Wolves and Team Malosi.  The game was tight throughout with The Wolves managing a first half win, 13-11, behind the scoring of Ann Kaisala.

Team Malosi’s Memory Viliamu, the league’s top scorer found her rhythm which helped her team win the second half 11-9 forcing a shootout.  The Wolves scored on their second shot and, with standout goalkeeping from Kaisala, never looked back. Malosi was held scoreless in five tries giving the game to The Wolves.

Thursday’s games were the last of the league’s first phase, with The 300 battling The Mighty Lupe and Team Malosi flexing their muscles against The Wolves.

The 300 battled but were not able to overcome the hard charging play of The Mighty Lupe’s Mataula Niko-Fale, scoring a game high 12 points. The 300 lost their final game 2-0 to finish the season at 1-5.  The loss seeded The 300 in fourth place to face the first place Wolves in the semifinal playoff, Saturday, April 17.

The Wolves, hoping to finish with a perfect record, were in a bit of trouble; only four players were available to play against Team Malosi. The Wolves, however, showed their tenacity behind the scoring of Alama Tatofi’s 8 points and Lynn Taupaki’s 5 points to win the game’s first half 14-9.

Memory Viliamu set the pace in the second half. With the help of Epenesa Matuu’s 2 points and Summer Samuelu’s newly found goalkeeper skills, Team Malosi held The Wolves to 7 points while scoring 11 to take the second half.  The Wolves had the shootout lead 2-1 with a last shot attempt by Team Malosi.  Memory Viliamu, knowing that her team needed two points to win took the risky two-point goalkeeper to goalkeeper shot.  The shot was blocked by The Wolves but, the power and spin on Magele’s deflection caused the ball to roll into the goal for Team Malosi’s second win of the season. Team Malosi face the second seeded The Mighty Lupe at the Saturday semifinal.