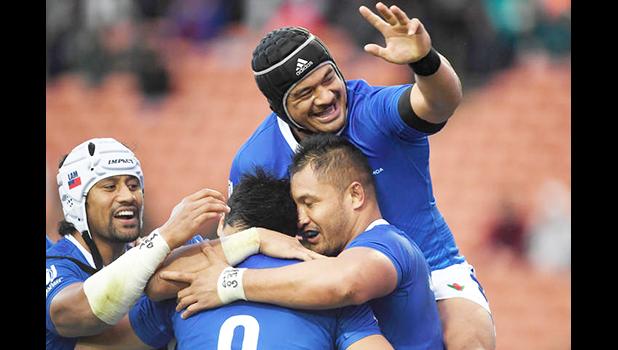 The Manu led by 20 points early in the second half but withstood a determined 'Ikale Tahi comeback to prevail 79-28 on aggregate over two legs, following last weekend's 42-13 victory in Auckland.

With their place in France now confirmed, how is coach Seilala Mapusua feeling?

"The first word that comes to mind is relieved, a little bit of satisfaction and a hint of excitement," he said post match.

"I'm just proud of the way the boys performed over these last four weeks. We had a really good lead-up and then I asked a lot from the boys in the last four weeks and they definitely delivered."

The first quarter of the match was dominated by long stoppages and basic errors in the slippery conditions, with Tonga losing lock Harrison Mataele and hooker Siua Maile to injury inside the first ten minutes.

It was the 'Ikale Tahi who opened the scoring with a fourth minute penalty, after Samoa had spilled the kickoff and then conceded a penalty from a scrum. Samoa levelled the scores five minutes later before Henry Taefu's second penalty gave the Manu a 6-3 buffer on 13 minutes.

After a cagey start to the match, in which both teams struggled to build phases and hold onto the ball it was Samoa who seized the initiative 15 minutes before the interval . A long raking kick pinned Tonga back inside their own 22. Samuel Slade stole the resulting lineout and the ball spun wide, with first five Rodney Iona's looping cut-out pass finding dynamic winger Ed Fidow, who raced away down the right-hand touchline to score the opening try, with Taefu adding the extras.

By now, the Hamilton rain had calmed somewhat and Samoa were starting to find a lot of space in the Tongan defence.

The red wall broke again two minutes before half-time, with Neria Fomai evading four defenders and offloading to a team-mate, who slipped an inside pass to energetic halfback Jonathan Taumateine who raced away for his first test try. Henry Taefu's conversion gave Samoa a commanding 20-3 half-time lead.

Samoa stretched their advantage to 20 points with a penalty goal shortly after the restart before Tongan fans finally had something to smile about.

A long period of pressure hammering away at the Samoan goal-line was rewarded when replacement hooker Jay Fonokalafi drove over for a try on test debut. James Faiva added the extras to cut the deficit to 23-10 with 28 minutes remaining.

The 'Ikale Tahi were almost in again a couple of minutes later when Faiva's cross-field kick found Walter Fifita on the left wing. The Tongan sevens star bumped off his opposite Ed Fidow, only for the Samoan winger to dust himself off and make the tackle at the second attempt.

Tonga didn't have to wain much longer for their second try, with the ever-present Sione Tu'ipolotu rumbling over from close range in the next phase to make it 23-15 Samoa with just over a quarter of the match remaining.

Samoa were reduced to 14 players when prop Tietie Tuimauga was sent to the sin-bin with 15 minutes remaining but veteran flanker Jack Lam, in possibly his last ever test, won a crucial penalty at the breakdown to ease some of the pressure.

The result was then put beyond doubt when Stacey Ili regathered a clever chip kick from Rodney Iona and race away to make it 30-15 after the conversion with seven minutes to play.

Kalolo Tuiloma scored Samoa's fourth try in the final minute to complete a 22 point win on the night.

Tonga coach Toutai Kefu was encouraged by his side's improved performance and felt they could have won if a few calls had gone their way.

"I think the scores midway through the second half were 23-15 and we had that penalty on the far side. I thought we got penalised for that driving maul - I thought that was a bit of a weird call but I thought that was probably the turning point for us," he said.

"If we were to have executed that driving maul and maybe got to 23-22 the game could have gone anywhere I thought."

Samoa's qualifying win means they will join England, Japan, Argentina and a qualifier from the Americas in Pool D at the 2023 World Cup in France.

Tonga will face the Cook Islands in Pukekohe next Saturday for the right to playoff against the winner of the Asia Rugby Championship.