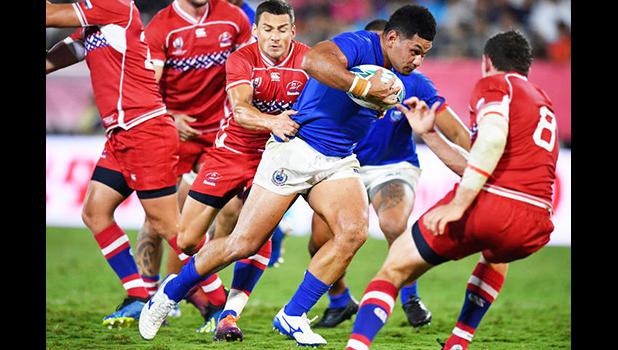 Fukuoka, JAPAN — Manu Samoa have made two changes in the tight five for their final Rugby World Cup pool match against Ireland in Fukuoka on Saturday (Friday American Samoa time).

"We thought Jordan Lay played extremely well against Japan but we've gone for Logovi'i Mulipola this week to just give that little bit of certainty at scrum time," he said.

"Jordan is fantastic around the field and we'll probably give away a little in that area but we just want to make sure our set piece is strong and solid."

In the only other change to the starting fifteen, Teofilo Paulo reclaims his starting spot in the second row.

"Teofilo Paulo has come in for Pilula Fa'asalele, who will drop to the bench," Jackson said.

"But that's just about the need to have some height through our line-out to be able to compete with Ireland's height and to have an out and out lock partnering Kane Le'aupepe just gives us that good balance in our set piece - especially at scrum time."

The back-line remains unchanged from their previous match against Japan and Jackson said he wanted to reward a series of good performances.

"I think UJ Seuteni is starting to prove that he's an international first five and I think he showed that against Japan and then he transitioned to fullback," he said.

"Henry Taefu took over the kicking duties last week and the performance that he put in was massive - so it's good to have that consistency in the back line."

Taefu has started every match in Japan for the Manu and says there's no reason they can't end their tournament on a high.

"We're looking for the win. Obviously that's what we came to try and win every game.

"Obviously the results haven't gone our way but the goal is still the same. Japan beat Ireland so we are capable of doing that as well," Taefu said.

Meanwhile Ireland have make 11 changes from the starting fifteen that beat Russia 35-0, with Tadhg Beirne, Jonny Sexton, Bundee Aki and Keith Earls the only four survivors.

Ireland prevailed 40-9 when they last played Samoa in November 2013 and a win on Saturday would be enough to secure their place in the quarter finals.