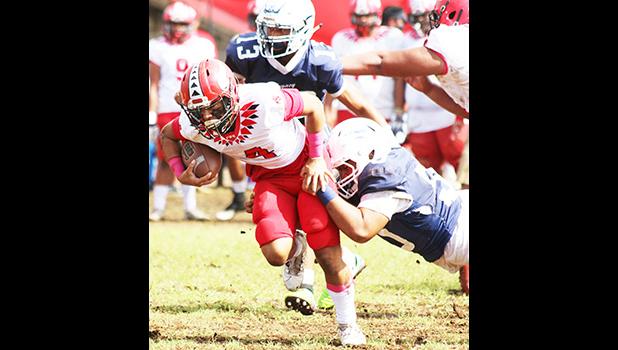 Pago Pago, AMERICAN SAMOA — The most important battle in any football game is the battle in the trenches. And both Samoana and Tafuna will be giving it their all when they meet up this coming Saturday in the 2020-2021 ASHSAA Football Championship.

Pictured here is Samoana’s offensive line getting ready to snap the ball and make contact with the Vikings defensive line during their varsity playoff match up last Saturday morning at the Veterans Memorial Stadium. Samoana defeated the Vikings 52 - 34 as they look to head back to the championship game to face the Warriors and defend their title this Saturday.

A look at the injured Metuliki Tupou being tended to by ASHSAA’s ATC Florence Wasko early into the first quarter of their championship game against the Marist Crusaders last Friday evening at the Veterans Memorial Stadium – Tupou returned to the game and helped the Warriors in their 16 - 6 victory. Tupou was awarded the Most Valuable Player of the Season during the awards ceremony.

Head Referee Mike White and his group of offcials await the call from Valusia Talataina on a penalty call that was challenged and reviewed during the first half of the Sharks and Vikings varsity playoff game last Saturday morning at the Veterans Memorial Stadium.

A look at the Faga’itua Vikings side of the field as they went all out for their football team, in support of the Big Red Machine during their play-off match up against the Samoana Sharks last Saturday morning at the Veterans Memorial Stadium.