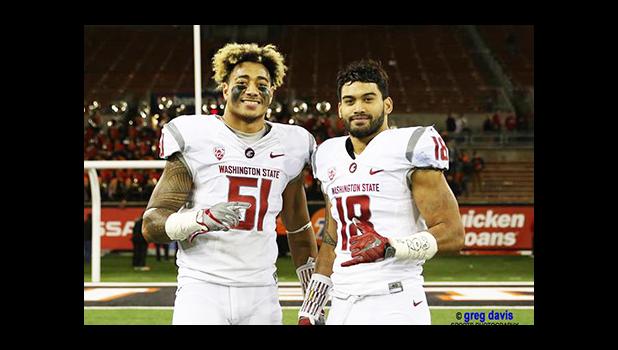 Luani and other Sons of Samoa focus on winning the Pac 12 for WSU
By
Tony Gasu
tony@samoanews.com

One of the big names in U.S. college football is former Faga’itua Vikings graduate Shalom Luani, who is being called by the Daily Evergreen newspaper — the most explosive player on Washington State University’s defensive depth chart.

But it hasn’t been an easy transition. In August, Samoa News released news on Luani when he was accused of punching another WSU student in the face in an altercation that happened right outside Domino’s Pizza on Greek Row.

It’s been about three months now since the incident occurred and Luani has been effective on the field like he never missed any time – for student-athletes, they are under a media microscope when dealing with adversity on and off the field, some will rise, others will fall – WSU nickel-back Shalom Luani chose not to back down.

During an interview with Samoa News, Luani was asked about the lifestyle at WSU, and how things are with him and his Polynesian brothers on the team, Luani said, “Life is good here at WSU – it wasn’t an easy journey, I had to make a lot of sacrifices and commitment to this journey. “

Luani told Samoa News, “Playing alongside with my brothers from the island is one of the greatest things here at WSU. We have two more games to go, but our goal and focus is to win the Pac-12.”

The Daily Evergreen reported last week that Luani is now supervised by ‘new’ position coach, Roy Manning. Luani went from safety to nickel positions when he returned after missing the season opener against Eastern Washington.

Luani’s new position coach, Manning played three seasons in the NFL with five different teams – he said that Luani is one of WSU’s most consistent guys and can bring versatility on the football field. “He’s now playing about four to five different spots, throughout the course of this season, even in games, we move him around. He doesn’t miss a beat, he knows the defense and plays with his hair on fire, which is really fun to see as a coach.”

Last year Luani started all 13 games and earned 2015 All-Pac-12 Honorable Mention. He was named to the Polynesian College Football Player of the Year Watch List and totaled 90 tackles – third on the team with three tackles-for-loss, and four interceptions.

Luani also had six pass break-ups, two forced fumbles and one fumble recovery. He earned the Pac-12-Defensive Player of the Week honors after posting 11 tackles and two interceptions in their big win against Oregon State in 2015.

Making big plays for WSU, position coach Manning said, “You see him hit somebody or run to the football, there’s nothing quiet about that – he’s one of those guys that leads by example.”

The humble grind is nothing new to Luani – he wasn’t handed a scholarship coming out of Faga’itua High School in American Samoa, but he was definitely known as one of the silent assassins to come out of American Samoa – homegrown muscle.

Shalom told Samoa News that he “thanks God for the talent and strength, for giving me a family that’s supportive of me and my journey. I would also like to thank all the faife’au, pastors and servants of God in American Samoa and abroad for all their prayers, as well as to the people who helped me with this journey.”

Luani concluded “I appreciate all the support, I would like to send a special congratulations out to the Home of the Vikings and Head Coach Pooch Ta’ase for winning another 3-Peat title for the east side – Happy holidays to all my families, friends, and supporters back home. Fa’afetai, tele lava.”