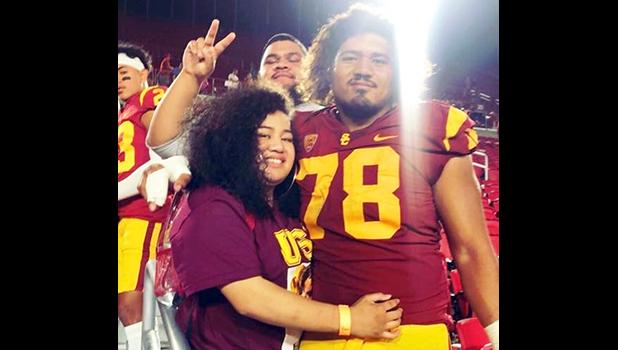 Los Angeles, CALIFORNIA — In July, a week before she would check into the hospital, Noreen Tufele offered her little brother, Jay, a ride back to USC’s campus. It was a generous offer, considering the 10-hour haul between their home state of Utah and Los Angeles. But that was typical Nini, as Jay calls her — always thinking of family, always watching out for him.

It was a few days after Noreen returned that her breathing became shallow and labored. Her family, concerned with how rapidly her condition worsened, took her to the hospital. She soon tested positive for the novel coronavirus.

Several other members of the Tufele family fell ill shortly after, Jay said. But none felt the full weight of the virus’ wrath like Noreen. Almost overnight, her body began to shut down. By early August, Noreen, 26, was on a ventilator in the intensive care unit, fighting for her life.

In Los Angeles, Jay, a behemoth All-Pac-12 defensive tackle, had never felt so powerless. He and Noreen used to talk every day. Now, he’d never felt so far from her.

Jay knew right then that he wouldn’t play college football again, even as USC coach Clay Helton advised his players to stay patient. Tufele, who would have been a redshirt junior, announced his decision to opt out a week later in a social media post, explaining he was doing what was best for his family. Even as Noreen’s condition slowly improved and the conference announced its return, Tufele knew he had to keep moving forward.

The past few months have put everything into perspective for Jay, who’s viewed as a likely top-100 pick in April’s NFL draft.