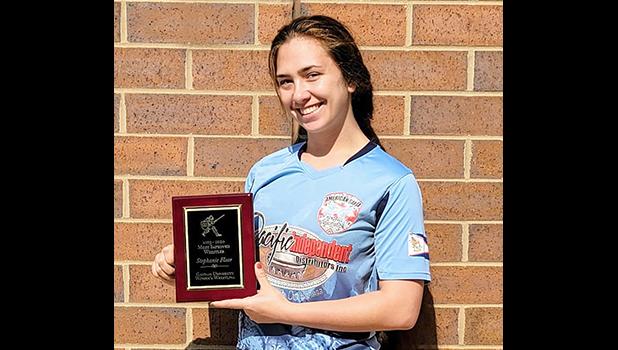 Pago Pago, AMERICAN SAMOA — American Samoa Women’s Beach Handball Captain and 2018 Youth Olympian Stephanie Floor is also a college wrestler.  Stephanie wrestles for Gannon University in Erie, Pennsylvania and has been awarded the Most Improved Wrestler for the second straight year. Earlier Stephanie was also awarded All American Scholar Athlete by the NCAA for the second straight year.

This past season Stephanie earned her first pin and her success on the mat has also earned her a top 25 ranking by the NCAA. Although neither of the twins, Stephanie and Danielle Floor, wrestled in American Samoa, they do come from a wrestling family as their older brother Sean is a five-time All American wrestler and brother Carl is the 2008 USA National Cadet Champion. Carl also wrestled for American Samoa and earned American Samoa a 2012 London Olympic invitation by placing second in Africa, but chose not to compete.

“When we lived in the states, wrestling was our number one sport and the twins were always with us at training and competitions. Stephanie was always a student of anything that interested her and her desire to improve cannot be matched.  She’s done it in handball and in college wrestling,” explained her father, and local handball coach CJ Sagapolutele Floor.

Stephanie, the 2018 Leone High School Valedictorian, and her twin sister Danielle both attend Gannon University on wrestling scholarships, with Stephanie majoring in Sports Medicine and Danielle in Secondary Education. Stephanie has also completed her bronze level 1 USA Coaching course and has intentions of completing level 2 during the winter months.

Gannon University Women;’s Wrestling Head Coach Christen Marie Dierken noted, “I’m very proud of Stephanie. Her tremendous growth is attributed to her complete dedication to excellence and her growth mindset. Above that — she is a young woman of character. I am truly blessed to be her coach.”

The twins will be rejoining the Women’s Handball and Women’s Beach Handball teams during the 2021 competition season. The ASHA has been training three to four days a week all year despite the COVID-19 restrictions in hopes of recruiting and preparing players for the 2021 Oceania Championships.

In handball, which is played indoors on a court just a bit larger than a basketball court, 14 U17 players and 14 U20 players, girls and boys will compete as well as a senior team in both men and women divisions.

In beach handball 10 players, U17 Women’s and 10 players U17 Men’s team will compete along with a senior team of men and women.

“Our Youth and Junior teams will always feature residents only, but our senior teams rosters are more difficult to fill as we do not see this age group trying out or even playing much sports here in American Samoa.

“For that reason the twins are training their classmates and team mates who would love an opportunity to travel, compete and win for our territory.”  Floor concluded.