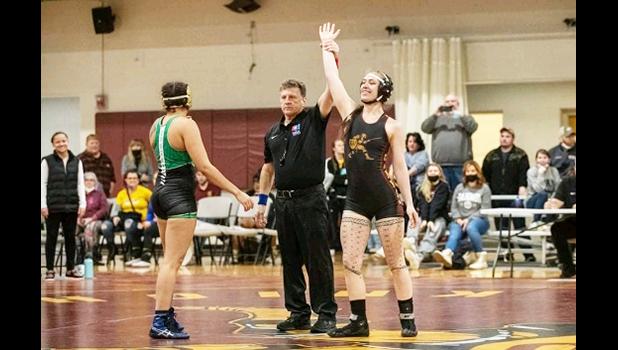 Her appearance will be the fourth time she has qualified as the senior hopes to improve on her results.

The qualification tournament was held at Erie, Pennsylvania in her home school Gannon University on Feb. 20 and featured twelve colleges and universities in the Northeast region.  A total of 18 wrestlers competed at the 143 lb division with the top 5 earning a berth at nationals.

Stephanie began her day by pinning Sidney Ramos of Tiffin University in 1:47 but lost her match to eventual second place finisher Madison Sandquist of Sacred Heart College at the 5:10 mark.

“I should have wrestled in the championship round but I got excited as I was beating her with less than a minute to go.  I over shifted a bit and she got me,” Stephanie said.

During the consolation semifinal round Stephanie dominated another Sacred Heart wrestler Temiatyo Samusi by a score or 12 – 2 before falling to Nia Miranda if Tiffin University at the 5 minute mark.

“Nia has beaten me every time but I feel that I have made great strides in my improvement.  Again I feel as if I should have won but I made a few last second mistakes,” Stephanie said.  She added “My dad always said we learn more from loosing and if we meet at nationals I will be ready, I have two weeks to prepare and study my videos.”

Gannon placed third in the qualification tournament and will have eight wrestlers competing at nationals including Lana Perez of Honolulu who competes at 136 lbs and shares Polynesian heritage with Stephanie and her twin sister Danielle.

Both twins continue to train in handball as they have the entire women’s wrestling team playing as a warm up before wrestling practice.   The cardio and athleticism of handball has been recognized by USA Wrestling and witnessed by the twins’ brother Carl Floor when he was training with the USA Men’s Wrestling Team at the USA Olympic Training Center at Colorado Springs.

“I knew my dad could coach this game and I knew my sisters would excel at it,” Carl said.  “They took it to another level which is how my dad is,” he added.

Currently the American Samoa Handball Association is recruiting under-17 girls who wish to compete in Greece in June at the IHF World Beach Handball Championships.  The best girls along with women over 17 will have a chance to try out for the Woman’s Handball team, which will be competing at the SoCal Cup, at Huntington Beach, California in late August.

ASHA President and National Head Coach CJ Sagapolutele Floor added,”I am trying to also recruit a men and boys team but, there’s minimum interest and very little commitment from them.  It’s a shame because they are missing out on great opportunities to travel and do something American Samoa rarely does — win.  I am now focusing on younger boys and girls at the elementary level because I see big scholarship opportunities and more and more colleges and universities are playing handball in the USA.”