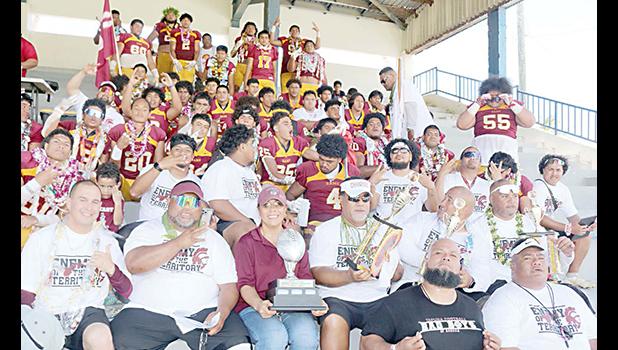 The Warriors football team, under the direction of Principal Tutuila Togilau and Head Football Coach Kevin Magalei have now been crowned with a Perpetual Trophy that will be cemented at the Home of the Warriors after picking up their third championship title in a row.

Coverage of ASHSAA Football is proudly sponsored and brought to you by Congresswoman Uifa’atali Aumua Amata.

The Tafuna Warriors defensive unit taking a break while their o ense was on the eld during the third quarter of their championship match up against the Leone Lions last Saturday morning. [photo: Tony Gasu]

Tafuna High School’s Principal Tutuila Togilau (left) and the Warriors Head Football Coach, Kevin Magalei, pose with their Perpetual Trophy that was awarded to the Warriors and will remain at the Home of the Warriors forever. [photo: Tony Gasu]