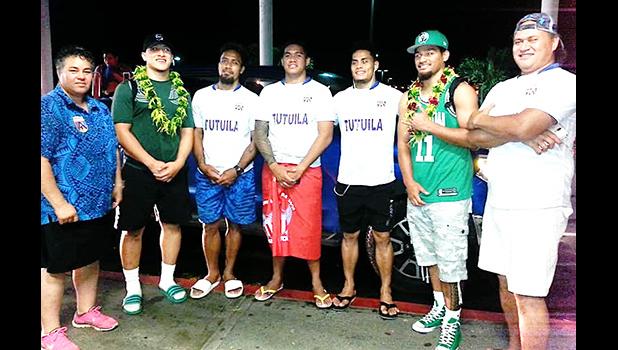 Pago Pago, AMERICAN SAMOA — Three off-island rugby players have arrived in the territory, and training camp began this past Sunday in Ottoville for the Talavalu squad: the men’s rugby team that will be representing American Samoa at the 2019 Oceania Sevens Championship, a 3-day event set to be hosted November 7- 9 at the ANZ Stadium in Suva, Fiji.

Talavalu team manager Annie Coffin told Samoa News yesterday that the 12-man Talavalu crew is comprised of 5 local players and 7 from off-island, who are paying their own way here.

According to Coffin, not all local players are eligible to play in Fiji because of “very strict” travel guidelines. Currently, in order to participate in any Olympics qualifier, a player must hold a valid US passport. (The 2019 Oceania Sevens Championships serves as the regional qualifier for the 2020 Tokyo Olympics Sevens).

And since some of the local players were born in Upolu, they are automatically ineligible to compete. “So the call went out last month, to all American Samoa players — both local and off island — who hold US passports and want to play in the Oceania championships,”  Coffin explained, adding that players flying here wanting to join the team are paying their roundtrip airfare out of pocket.

Interested players were to touch base with the American Samoa Rugby Union officials about what needed to be done, to get them on the roster.

Lolesio Lolesio of Atu’u, a former player for the Leone Whites, arrived nearly two weeks ago from Maui, Hawai’i. The other two players, Joseph Mano of Laulii and Matthew Sione Masoe, got in this past Monday night. There are 4 more players coming from off-island, and will touch down tomorrow night.

The Talavalu will be departing for Fiji on Sunday, Nov. 3rd

As with any other trip — for local sports federations — financial help is being sought.

Yesterday, Coffin went to the Governor’s Office to solicit funding assistance. It was unknown as of press time, how much money — if any — will be contributed to Talavalu for the Fiji Games.

(Samoa News points out that Governor Lolo Matalasi Moliga, on behalf of the American Samoa Government, made a hefty $100,000 donation to the Manu Samoa when the team traveled to the territory earlier this year to fundraise for their trip to the World Cup in Japan. On top of that, $2,651 was collected during the ‘ava ceremony; $2,995 was donated by cabinet members; and $44,423 came from a telethon/ radiothon, according to a financial report submitted by Lolo to Samoa Prime Minister Tuilaepa Sailele Malielegaoi.)