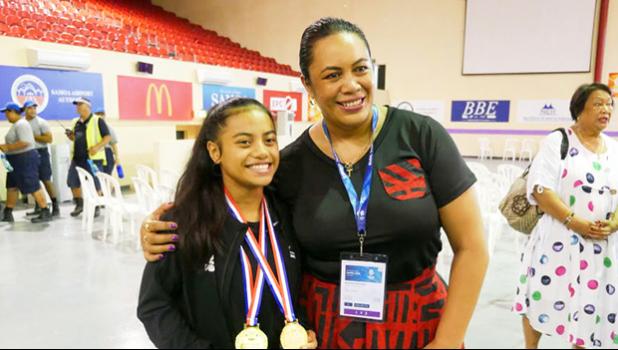 Auckland, NEW ZEALAND — Thirteen-year-old Olivia Selemaia and former All Black Sevens captain DJ Forbes have issued each other a challenge.

The pair met and got to hang out together at the Pacific Games in Samoa in July. Forbes was there as athlete support for the New Zealand team, and Selemaia was there as a competitor in weightlifting.

Selemaia, who’s in her first year of high school at Sancta Maria College in Auckland, was crowned a double Oceania and Commonwealth youth champion in the 55kg category. She lifted 80kgs in the clean and jerk and 61kgs in the snatch, for a combined total of 141kgs - more than double her own weight.

Forbes then threw down the gauntlet to Selemaia: to clean and jerk 90kgs. In return, Selemaia challenged Forbes to lift 100kgs. They are goals that they’re still both working to achieve.

Along with her gold medals, Selemaia also left Samoa with the support and guidance of Kiwi sporting legends like Forbes, and former world champion discus thrower Beatrice Faumuina, who was there representing New Zealand at a Pacific Sports Ministers meeting.

Walking around Apia Park in the electric atmosphere of the Pacific Games opening ceremony, with the roaring of fans and the rhythm of Samoan drums, it was like a homecoming for the Kiwi-born Samoan Selemaia, who had both nations cheering her on at the Games.