There will be a ASHSAA football post season- playoffs and championship 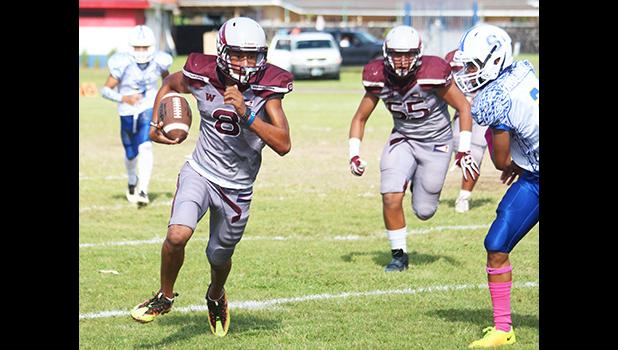 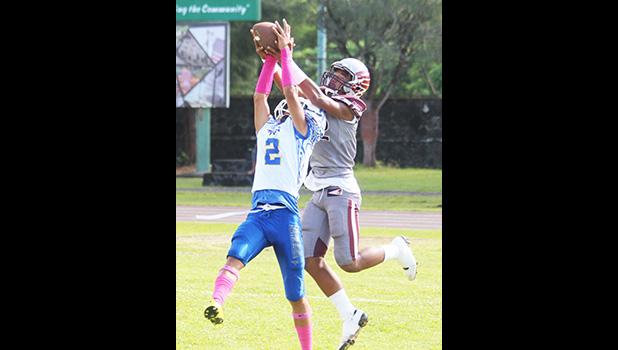 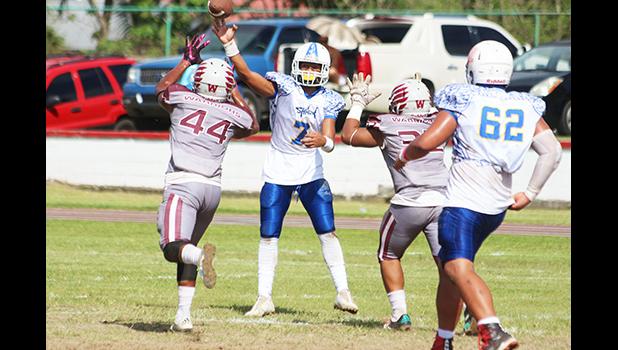 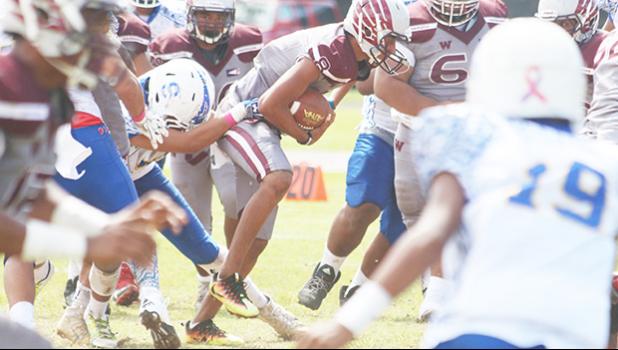 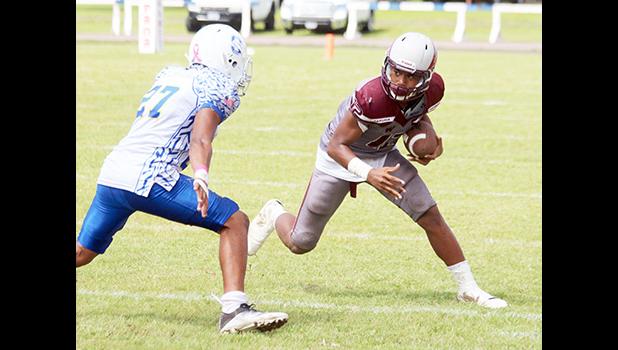 Samoana hands Tafuna its first loss of the season
By
Tony Gasu
tony@samoanews.com

For everyone who's been praying for a post-season — your prayers have been answered, thanks to principal Tupa’i Rod Atafua, head coach Pati Pati and the mighty Samoana Sharks who sent the Warriors packing in both divisional match-ups during the 8th week of the 2017-18 American Samoa High School Athletics Association (ASHSAA) football season.

Coverage of this year's ASHSAA football is sponsored by Congresswoman Aumua Amata.

The Blue Empire came out of a bye week, and delivered Tafuna their first loss of the season in the varsity division – through a desperate drive in the final seconds of the match, which resulted in a game winning field goal by Elliot Lelei, who had missed all his field goal attempts this year, except this one: a game winner.

In the junior varsity division, the Sharks edged the Warriors in a two-point victory, 8-6, their second win over the Warriors in regular season, making Samoana the No.1 seed in the division.

The Warriors’ injuries from their previous match ups took a toll on them, as the team wasn't  able to field two of their star players, Panapa Filoiali’i and Fetu Gaoa – forcing them to move Koison Ozu up from the JV squad, to be the Warriors workhorse last Saturday against the Sharks, pairing up with Ben Tuimaseve who also took snaps as running back throughout the whole game for the first time this season.

The Sharks defensive unit led by their strong front, Sonny Nakiso, Antonio Pule, Solomona Seiuli, and Sebastian Briski managed to shut down the Warriors in the opening quarter of the match, as Tala Sufia couldn’t seem to figure out a way past the Blue Empire's defensive wall.

Sufia, who hadn’t thrown an interception all season, threw two last Saturday against the Sharks, and both were picked off by the ‘Black Panther’ Kalisi Lotulelei.

1:14 remaining in the opening quarter of the game, and Samoana spots a threatening first and goal situation on Tafuna’s 1-yard line. This came after a long pass caught by Zephanaia Pati inside the red zone.

Samoana’s third and goal situation and Anthony Feala muscled in their first touchdown of the game with a quarterback sneak, putting them in the lead. The field goal attempt by Elliot Lelei was no good, as his kick went far right of the goal posts.

Just when the Sharks thought they lit the flame of hope in the opening quarter, Tafuna’s Sufia watered out those hopes after he bombed a long pass out to Pene Fa’avae who caught it inside Samoana territory. On first down, Sufia sent Ben Tuimaseve straight up the middle for a 15-yard touchdown run for Tafuna.

The two point conversion - a quarterback keeper by Sufia - was good enough to bring the Warriors back to life, leading by two points with 5:02 remaining in the opening half.

6:07 in the third quarter, and Anthony Feala and the Sharks were on the move again. Samoana's first down at midfield, and Feala tosses a screen play pass to David Mikaele who broke three tackles on his way down the sidelines to score his first touchdown of the game – a 55-yard attempt for six.

The two point conversion, a halfback pass from Lotulelei to Sebastian Briski was no good as it was broken up by the Warriors.

2:33 remaining in the ball game, and the Warriors finally answered back – Tafuna’s first down at their own 35-yard line, and Sufia bombed a long one out to Fa’avae who beat Lotulelei’s open field coverage and caught the pass for another Tafuna touchdown.

The two point conversion hand off to Tuimaseve was stopped immediately by ‘Bunky’ Misitana in the backfield for a loss.

Less than a minute remaining in the ball game, the Sharks were clearly inside Warrior territory, and Feala opted to go with Mikaele on the running game to gain yardage and run down the clock.

With just 33 seconds remaining, the Warriors up by two, it was up to Elliot Lelei to kick the winning field goal from Tafuna’s 30-yard line. Pati sounded the snap and Lelei’s kick was good to pull the Sharks back up to take the lead by a point.

Samoana fans rushed the field in excitement, which led to a penalty.

27 seconds remaining in the game, and Sufia looked to fire another touchdown pass. But this time, Samoana was ready for it. Sufia’s pass to Pulenu’u Fono was caught, but as Fono made his way towards the end zone, Kalisi Lotulelei delivered a touchdown saving tackle that knocked the ball out of Fono’s hands and recovered by Samoana's Antonio Pule.

Feala and the Sharks offense came on to the field in victory formation and took a knee to end this one – their fourth straight win of the regular season, but Tafuna's first loss.

The Sharks didn’t hesitate to go to their ‘air-attack’ to open things up, as Jr. Tanielu and his offense were trying to click on the way downfield, testing the limits of Tafuna’s defensive unit. The Warriors were able to hold down the fort, but it didn’t last.

Avery Seumanutafa, who caught a touchdown pass during the opening of the second quarter, but was called back due to a holding penalty, managed to catch another one in the end zone, this time, it was for six.

It was Samoana’s opening touchdown of the game.

Seumanutafa caught a leaping pass from Tanielu on a fourth and goal situation from Tafuna’s 10-yard line.

The two point conversion was a roll out quarterback keep by Tanielu which secured an 8 point lead with 3:33 remaining in the second quarter.

To open things up for Tafuna in the second half, Francisco Mauigoa tucked and ran with the ball on numerous plays as he marched the Warriors downfield.

4:03 remaining in the third, and Mauigoa, who played a second and long situation inside Sharks territory, couldn’t find an open receiver so he decided to tuck and run the ball himself for a 15-yard touchdown, which gave the Warriors their first six points of the game.

The two point conversion was disrupted immediately in the backfield by Masaichi Aviu and Daniel McMoore as they secured their two point lead into the final quarter of play, winning their second match up against Tafuna in the regular season.