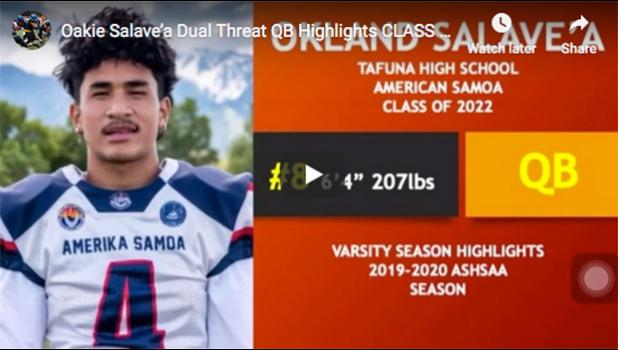 Pago Pago, AMERICAN SAMOA — 6,000 miles southwest of the mainland of the United States, at Tafuna High School in American Samoa, Oakie Salave'a has been working hard to get noticed by colleges.

"I'm working very hard to be recruited as a quarterback," said the 6-foot-4, 207-pound Salave'a. "I know the odds are against me as a Samoan quarterback from the islands. But that remains my drive and motivation every day."

A Class of 2022 recruit, Salave'a has early offers, from Dixie State, Hawaii and Southern State. He has also been hearing from Colorado, Maryland, Oregon, Texas Tech, Utah and Washington State.

His father Okland Salave'a played for the Buffaloes as a defensive lineman in the late '80s. The elder Salave'a now coaches at Tafuna High.

"The University of Colorado is up there," Oakie said when asked where his interest lies early on in the recruiting process. "That's where my dad went and graduated from. He had a very successful career there. I love the energy (Colorado's new coaches) are bringing. I love the culture they are trying to build... (that is) something I am definitely wanting to be part of.

"But all in all, I want to go to a school that's the best fit for me. (I'm) praying on it. (I want) a school that's got a good environment for me, that will elevate my game and help me grow as a successful man."