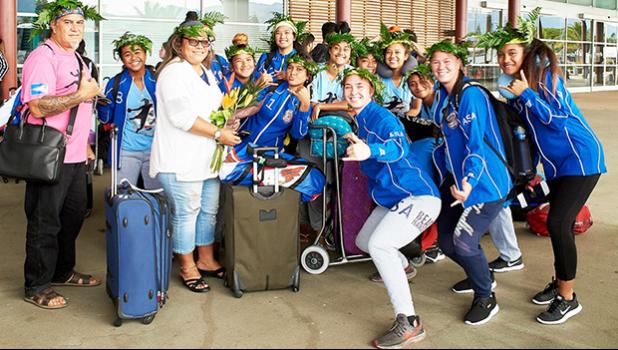 “I’m proud of our girls,” wrote Carl Floor Sr., head coach and president of the American Samoa Handball Association, in an email to Samoa News prior to the team’s departure from New Caledonia over the weekend.

He explained that American Samoa led for the first 10 minutes of the first half (9-4) before Australia called a time out. Australia then made a few adjustments to even the score at the 20-minute mark and take the lead 15-11 at halftime.

Floor said our team changed goal keepers, switching Jasmine Liu for Aiga Isa'aka “hoping to get an offensive spark as Jasmine was one of the top scorers throughout the first two games”; however, that change didn’t work and Australia began to pull away as the game progressed.

"Our girls began to tire and the effects of tournament injuries began to slow them down,” Floor said. Leading the game in scoring for American Samoa was Stephanie Floor with 8 points, followed by Lynette Liu with 5, and Pai Fanene and Luava'a Tofaeono with 4 a piece.

American Samoa won its fist two matches against Papua New Guinea and Fiji; but lost to the next contenders — New Zealand, New Caledonia , and Australia.

The matches against Australia and New Caledonia were important and were a must-win for American Samoa, to secure a place in the Top 3, after the loss to New Zealand.

Floor said New Caledonia beat every team by an average of 32 points, but were only able to muster up a 33-13 win over American Samoa. "With a halftime score at New Caledonia 20 to American Samoa’s 4, I decided to pull Stephanie out of the goal and put her on the court.  Jasmine Liu seemed to be in a scoring slump and the team needed a spark scoring only 4 first-half points with Lynette being held to zero as well,” Floor explained.

The second half “became exciting” as American Samoa held New Caledonia to only 13 points while Stephanie Floor scored 6, Beverly Ludgate added 2, and Dianne Loe scored 1 for a 9-13 second half score, the tightest New Caledonia score of the tournament.

“When you consider that we do not have proper National Olympic Committee (NOC) training facilities like New Caledonia; we don’t even have a proper gym to train in; and unlike the coaches of New Caledonia, New Zealand and Australia,  I've never played the game — I'd say we are doing well,” said Floor. “With proper funding, I know we are a great investment and there’s no doubt that we have a team that can medal."

Floor concluded, "Im looking forward to the new school year to train and recruit new hand-ballers as we prepare for our next tournament in February 2020. I don’t wait til a month before the games to train. Training is done way in advance of any tournament.”