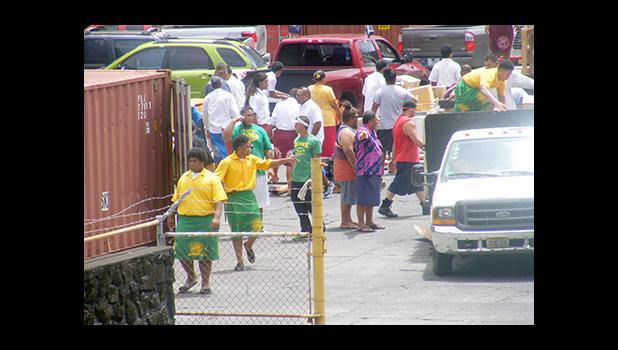 The Samoa Bowl Committee in conjunction with Tony Feist and his ICS Cargo Shipping Company helped Head Coach Jim Harbaugh and coach Tony Tuioti from the University of Michigan bring a full size container of football apparel for all the football student athletes of American Samoa, who continue to battle on the gridiron.

The container full of brand new cleats and uniforms for the teams and their coaching staff was unloaded this past Monday afternoon at the Port of Pago Pago by all the high school football coaches, and their football players.

Samoa News spoke to Samoa Bowl Committee’s Peter Gurr, who confirmed that the donation was from UM – courtesy of Head Coach Jim Harbaugh, his assistant coach Tony Tuioti, and the Wolverines Football Team.

Gurr told Samoa News Tuioti of UM said the donation was “worth about $400,000.00 – and they’re not equipment.” Gurr said, “They’re uniforms, some of them are used uniforms, but everything is in perfect condition.”

According to Gurr, the donation was put together from all the unused and used football gear that was cleared out when Head Coach Harbaugh made the transition of taking up the Head Coach position at the University of Michigan – his alma mater.

He added, “When Harbaugh went over to Michigan, that was his school – by then, he was picked up and contracted with NIKE. From then, they got ready to get rid of all the uniforms – no shoulder pads, no helmets – but it was all jerseys. There were a lot of tight compression shirts and a lot of football cleats.”

Gurr told Samoa News that there are still donated stuff leftover and in the works to be distributed. He said his relationship with Feist of ICS Cargo, “helped with the process of shipping this container of football goods to here on island, solely for the kids and youth of American Samoa.”

He told Samoa News, “This thing was not easy to put together” and the container of donated equipment was originally supposed to go to Africa, he said,“and according to Tony Tuioti, Jim Harbaugh found out about it and he said no! This container is going to American Samoa.”

Samoa News previously reported earlier this summer that the University of Michigan was hoping the donation would reach American Samoa during the time they arrived on island — so that they could personally give it out to the student athletes of the territory.

Gurr said Tony Feist and ICS Cargo Shipping Company, played a huge role in bringing this donation into the territory — “there were two shipments, and they all came in all in one month – Tony Feist, would have air pockets in his container that he would fill in.”

He said,“I saw it in L.A. and I couldn’t believe it – first of all, when we started communicating with Tony Tuioti and his guys, I thought it was a couple of pallets – but I was shocked in awe when I saw a whole 40-footer truck had arrived.

“I asked Feist if he was going to separate the football donation from the container into another container – but Feist said to me, pops, the whole container is yours,” said Gurr.