Vikings demolish the Lions 72-36 in their Senior Game 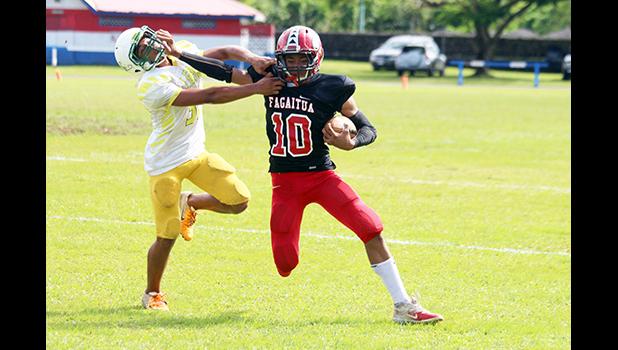 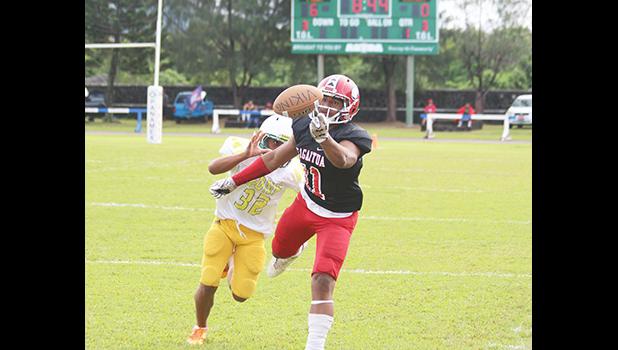 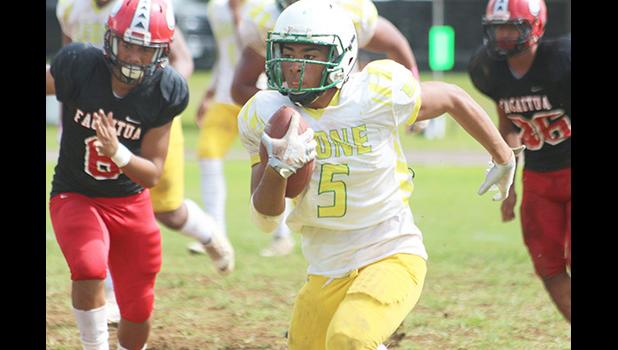 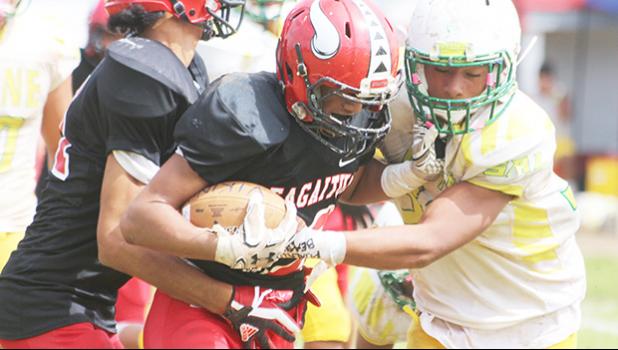 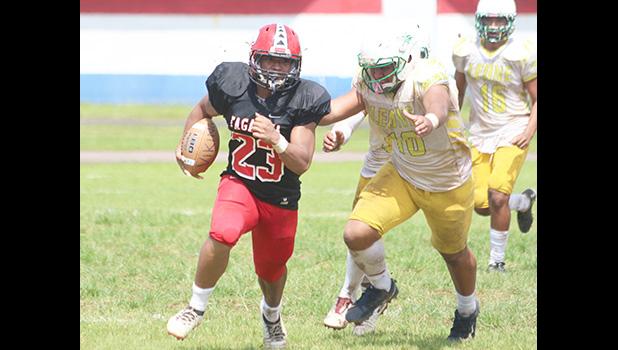 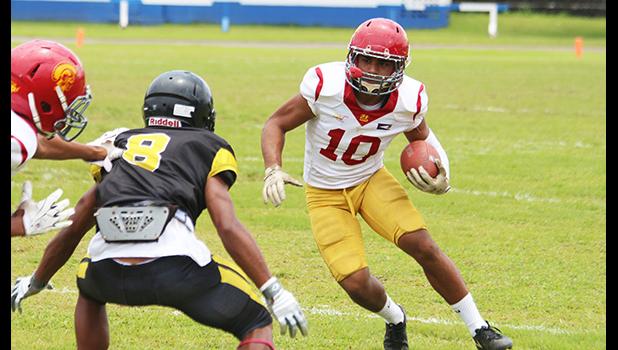 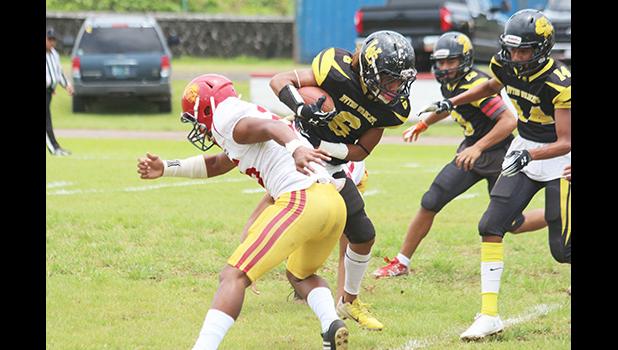 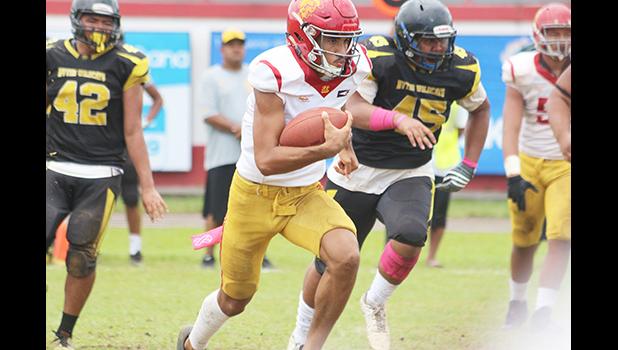 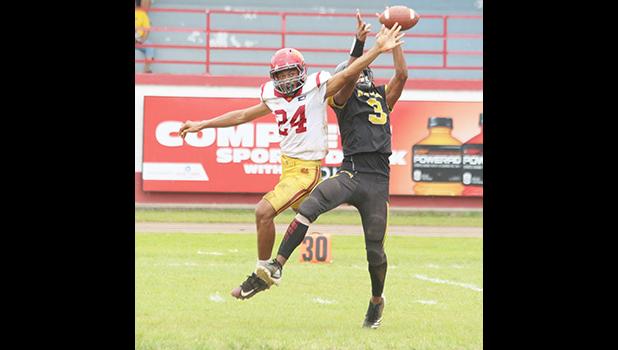 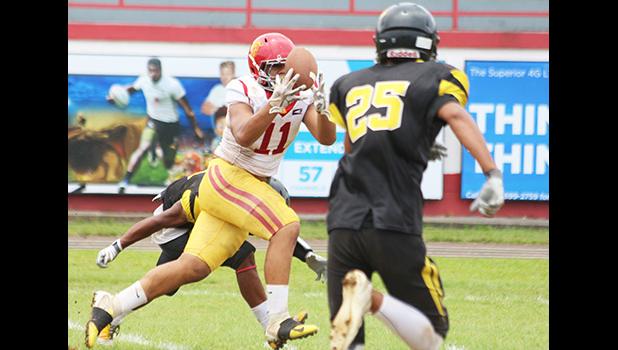 Pago Pago, AMERICAN SAMOA — Head coach Sua’ese Pooch Ta’ase and his Faga’itua Vikings were thrilled to come out victorious in a match against the Leone Lions - a match that had them at the edge of their seats in the first half, when the King of the Jungle came out strong and led over the Vikings to start the opening half.

The Lions were looking to spoil the Vikings Senior Game, but the Big Red Machine was able to regroup and deliver a mind blowing victory, the biggest one of the season thus far.

Coverage of ASHSAA Football is sponsored by Congresswoman Aumua Amata.

Head coach Kevin Magalei and the Warrior Nation bounced back with a huge victory against the Nu’uuli Wildcats - a 60 point victory last Saturday, following a loss to the Sharks two weeks ago.

After announcing their seniors - playing their final season this year - Ta’ase and his Vikings were stunned to see the Leone Lions coming out of the gates swinging, with Fa’alili Fa’amoe and his offense scoring on the first offensive drive of the game - looking to collect their second victory of the season.

With just 8:52 into the opening quarter, freshman runningback Wylan Faga led Leone’s ground game into the red zone and spotted the Lions a threatening first down at the 10 yard line. From there, Fa’amoe rolled out with the play action pass to connect with Joshua Taani to score the first touchdown of the game.

Leone was fired up.  They had a six point lead and their defense was able to deny Faga’itua’s attempt towards midfield, forcing them to punt on fourth down – a punt that was blocked by Leone’s special team. The ball bounced back towards the end zone, and a host of Lions rushed to recover it inside the end zone for their second touchdown of the game, thanks to its special teams.

The two point attempt was a quick slant pass from Fa’amoe to Elijah Elisara to put Leone ahead 14-0.

Head coach Ta’ase reminded his seniors that this was their last game of the year, and gave them the motivation they needed to get back on track. From there, the Vikings were focused. 2:23 remaining in the first quarter and Faga’itua finally scored their first touchdown, after a brutal running game by Faga’itua sent Manuita Sofeni into the end zone.

As the Vikings offense went in sync, Leone started shooting themselves in the foot by turning the ball over with fumbles and mishandling. After a fumble recovery from Faga’itua inside Leone territory, Sofeni crossed the goal line for his second touchdown of the game with just 14 seconds remaining in the first quarter. Faga’itua tied it 14-14 after Sofeni ran the same play up the middle for two points.

Maurice Ta’ala, the University of Hawaii prospect, led Faga’itua on both offense and defense. He stripped the ball out of Faga’s possession and recovered the fumble that would bring Sofeni and the Vikings offense out, Immediately going back to the no-huddle ground game. It didn’t take long for the Vikings to cross the goal line with Sofeni again leading them into the end zone for his third touchdown, putting Faga’itua in the lead for the first time 20-14 with just 6:54 remaining in the second quarter.

Not too long after, Faga made up for his mishandling of the ball and led the Lions from their own 40 yard line. Fa’alili sent Faga out with the counter hand off and Faga beat numerous Vikings to the end zone to score Leone’s third touchdown of the game, a 70-yard reception with just 6:22 still in the second quarter.

Leone came back and took the lead after Fa’amoe muscled his way past the goal line for two points to put Leone up 22-20. Just as Leone started to pick up the slack, they gave up the ball again after a fumble, and the Vikings took advantage from the 10 yard line. Leone expected Faga’itua to stick with the run but were disappointed when they saw Fitu Amata pulling out the option play and rolling out to fire a quick pass to Scott Pese for Faga’itua’s fourth touchdown.

The Vikings were again on top, 28-22, after a two point conversion by Sofeni with just 3:21 remaining in the first half. Thereafter, the kick off to the Lions bounced off Joshua Taani and the live ball was recovered by the Vikings at the 15 yard line. From there, Amata sent Fatu Fatu Jr. straight up the middle to score another Faga’itua touchdown . The two point attempt was a reverse hand off to Scott Pese to extend their lead 36-22.

After receiving the opening kick off for the second half, Faga’itua moved quickly downfield with some huge carries by Fatu Fatu Jr.

Vikings first down at the 10, and Sofeni weaves his way behind his offensive line to score another Faga’itua touchdown. Jesse Toilolo rammed his way through the Leone’s defensive line to extend Faga’itua’s lead 44-22 with his two point conversion at just 9:01 into the third quarter.

Leone continued to have bad luck into the second half when Fa’amoe led the Lions from their own 45 yard line and decided to run with the ball, then tried to pass it, but the ball was swatted away from him before he could even flex to pass. The live ball was picked up by Amata who ran it back to the end zone for another Vikings touchdown, extending their lead 50-22.

Not too long after, Leone fumbled the ball again after Taani lost possession at midfield, turning the ball over to the Vikings who were now just pounding the ball on the ground and running out the clock.

2:49 remaining in the third quarter and Faga’itua crosses the goal line again with a Fatu Jr. carry for a 15 yard touchdown reception, and after a two point conversion, the Vikings were up 58-22. After continuously fumbling the ball in the running game, Leone switched to the passing game and it worked out well for them.

Fa’amoe fired a deep pass to Livi Pearson that spotted them a threatening first and goal from the Vikings 3 yard line. From there, Fa’amoe muscled his way through the Vikings defensive wall to score. The two point attempt, a perfect trick play – reverse halfback pass to Joshua Taani - brought the Lions up to 30-58 with 11:07 remaining in the game.

In the final quarter, Ta’ase benched his starters and brought in the secondary unit to finish it off. Even they were on fire as they continued to score. Fatu Jr. and Pese each scored a touchdown to extend Faga’itua’s lead 72-30.      But Leone didn’t give up. With just 13 seconds remaining in the game, Fa’amoe led his Lions to the 1 yard line after a couple of tuck and runs. Fa’amoe muscled his way through a tough defensive hold and scored the final touchdown of the game.

It was a strenuous last push but wasn’t enough to hold back the Vikings from sailing to the East with a huge victory – The biggest lead of the season thus far.

The Warrior Nation put in work in a shut out victory against the Nu’uuli Wildcats when they racked up a 40-point lead in the first half of play with the help of their JV players, who were moved up to varsity this week after the JV season concluded two weeks ago, with the championship title remaining at the Home of the Warriors.

During Tafuna’s first offensive possession, it took only three plays for them to cross the goal line after two huge carries by Petesio Iosefo. Warriors quarterback Oakland Salave’a sent Iosefo straight up the middle to score the Warriors first touchdown , a 20-yard reception.

Salave’a fired a 45 yard pass reception to John Allen who stormed to the end zone for Tafuna’s second touchdown. The field goal conversion by (#35) was enough to secure a 13 point lead with 3:52 remaining in the first quarter.

With just 1:21 remaining in the first quarter, Iosefo continued to punish the Wildcats in the running game, after he broke three tackles and slipped loose out to the open field to score a 15 yard reception, extending  the Warriors lead 20-0 after the field goal conversion by a JV player for Tafuna.

10:12 into the second quarter and Salave’a fires a long pass to Allen from the 25 yard line to score another Tafuna touchdown, extending their lead by 27 points after a field goal conversion. Salave’a again fired two long passes to Allen and Jared Asalele for two more touchdown receptions for Tafuna, now leading 40-0 at halftime.

Tafuna opened up the second half with the first kick off return for a touchdown - the first one of the season. Allen caught and returned the opening kick off all the way back for an 87 yard touchdown reception, putting them up 47-0.

Midway through the second half, Magalei decided to bench his starters and bring out the rest of the JV players and secondaries. Leading Tafuna at quarterback was Starlight Lotulelei who had two huge carries to move the chains into Nu’uuli territory

5:43 remaining in the third quarter and Lotulelei sends Lama Manu straight up the middle to run over defender and score. It was now 56-0.

Going into the final quarter, Tafuna stuck to the running game. After two huge carries by Lotulelei and Manu, Tafuna’s first and goal from the 1 yard line had Lotulelei sending (#31) straight up the middle to punch in the final touchdown of the game. A field goal conversion ended the beating for the Wildcats 60-0.