Vikings remain at the top after ASHSAA Football Week #3 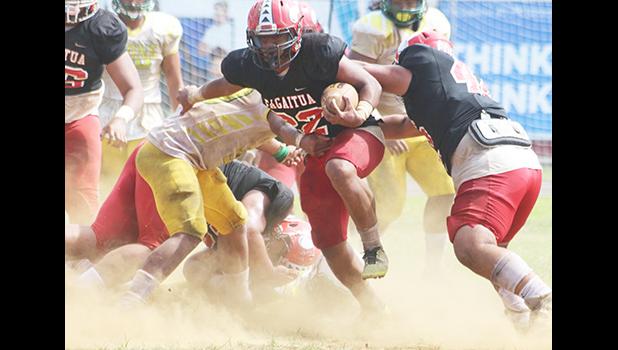 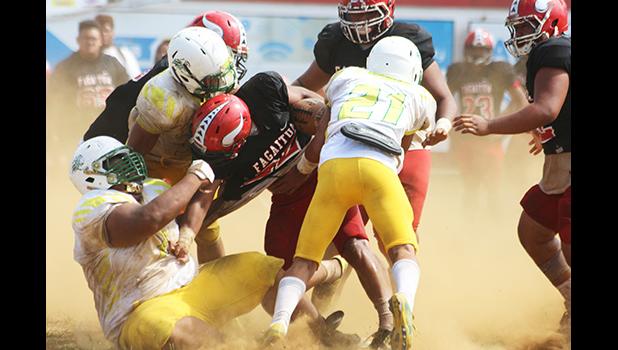 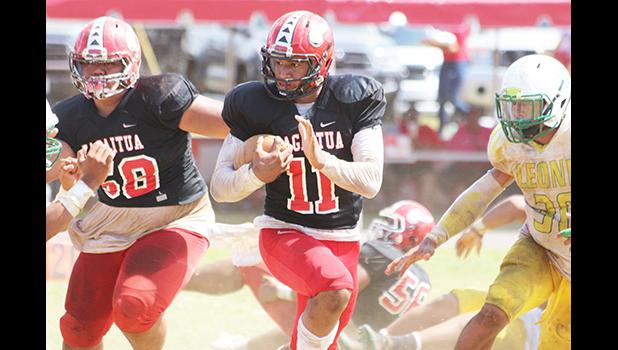 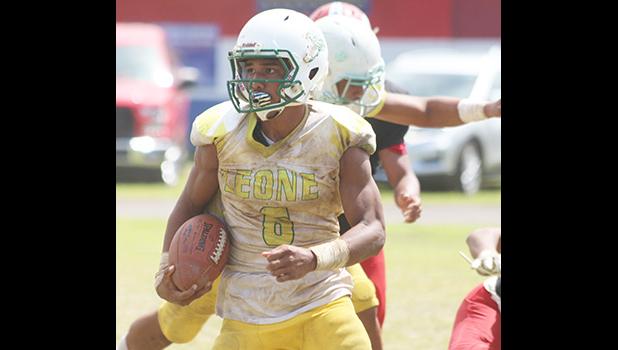 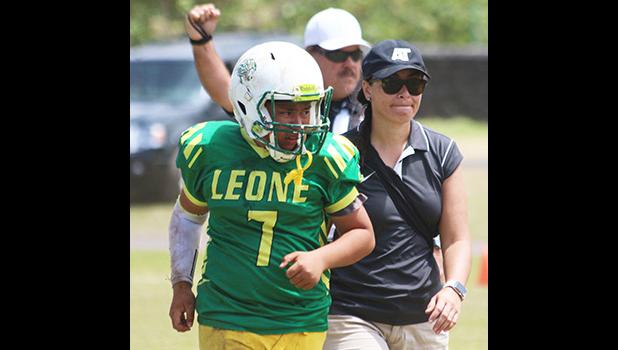 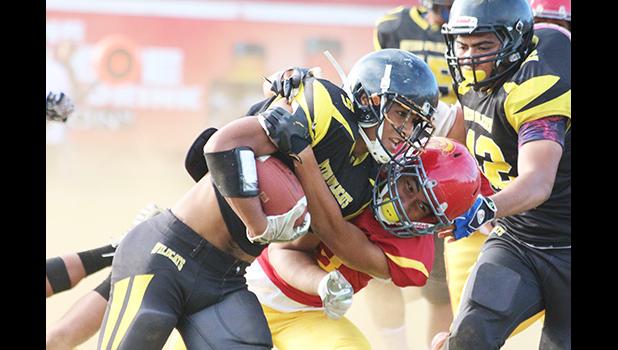 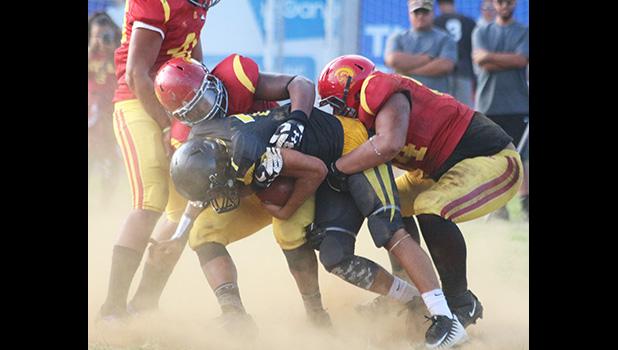 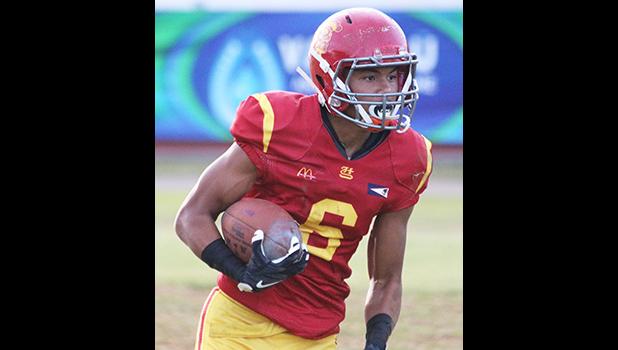 Pago Pago, AMERICAN SAMOA — This past Saturday at Veterans Memorial Stadium, head coach Sua’ese Pooch Ta’ase and his Faga’itua Vikings silenced the roar of the Leone Lions with a 44-20 victory, during the third week of the 2019-2020 ASHSAA High School Football season.

THS head coach Kevin Magalei and his ‘Tama Toa’ slayed the Wildcats in a lopsided 34-6 victory, a match that was rescheduled because the Warrior Nation wanted to witness the memorial service for their former All-Star Defensive Back, Alex Peric, which was held Saturday.

Meanwhile, the Sharks picked up their first win of the season after suffering a devastating loss to the Warriors in the season opener. Samoana silenced the Lions in a 30-6 victory this past Saturday.

lthough the Vikings sailed back to the East with the win, it was head coach Jerome Fiatoa and the Lions who drew first blood and scored the first touchdown after Leone quarterback Tolutasi Aumua executed a perfect play action pass to Livi Pearson from the 15-yard line for the first 6points of the match.

The two-point attempt quick pass out to Fa’alili Fa’amoe was good enough to put Leone ahead with 8 at just 3:12 into the opening quarter.

Samoa News points out that the Lions haven’t looked this good in a very long time.

The Big Red Machine however struck back with a brutal ground and pound attack behind a full house set with the likes of Manuita Sofeni and Joseph Umu. They quickly crossed the goal line after Fitu Amata tucked and ran one straight through the middle for an 8-yard touchdown reception. The two-point attempt was the same play to Amata which tied the game at 8 a piece.

The Lions roared back to take the lead after an astonishing offensive possession led by Aumua, Leone perfected a halfback pass from Fa’amoe to Pearson to score on a 30-yard reception with just 5:32 left in the opening half.

Leone still couldn’t solve the mystery of how to stop Faga’itua’s unstoppable ground and pound strategy. The Lions suffered, giving up another score after Sofeni muscled his way past defenders to score on another 8-yard reception, bringing the Vikings back to life with just 1:21 remaining in the first half.

In the second half, Faga’itua stuck to its full house set, as well as their ground and pound strategy which worked tremendously in their favor, as Sofeni scored his second touchdown of the game after taking in a 1-yard touchdown reception, putting the Vikings in the lead for the first time in the match.

They executed the same play to Sofeni during the two-point attempt to extend their lead 22-14 with just 7:12 into the second half.

Just when things couldn’t get any worse for Leone – after losing their quarterback to an injury late in the first half - they lost possession of the ball deep inside their territory on a 4th and long situation. Leone, in a punting formation, was stunned when they saw the snap to Fa’amoe - who was back to punt - scrambling in the backfield trying to recover the fumble which was recovered by Faga’itua’s Jesse Toilolo inside the red zone to bring Fitu Amata and his offense back on the field.

From there, Faga’itua’s 1st down play saw Amata dashing towards the sidelines and releasing a pass to Sofeni inside the end zone for another Vikings touchdown, widening the lead to 28-14.

The Lions didn’t go down without a fight however. With the loss of their quarterback in the first half, they turned to Fa’alili Fa’amoe to take the helm at offense, and they leaned towards Livi Pearson on a jet sweep play that had Pearson scoring his third touchdown of the game, a 21-yard reception to bring the Lions back with just 1:46 remaining in the third.

The Vikings, in the lead, had no interest in the passing game, and they stuck with the running game and perfected it from all angles, as they not only gained numerous yardage, they winded down the clock to put the nail in the coffin.

FHS’s Umu and Ronnie Oa scored two more touchdowns for the Vikings to close this one off with a final score of 44-20, making Fagaitua the only undefeated team in the varsity division.

Tafuna’s offense, led by Oakland Salave’a, started things off with their running game, utilizing their power back Niko Soava in numerous downs, and with a huge offensive line, the Warriors didn’t hesitate to gain yardage and cross the goal line early in the opening half.

Tafuna’s third down at the 3-yard line and they went to Soava to score the opening touchdown of the game. The two-point attempt was good and the Warriors were up 8.

The Wildcats offense was stunned when their 4th and long situation inside their own red zone saw a fumble between the center and the punter roll into the end zone and as Nathaniel Maea recovered the ball for Nu’uuli, he was swarmed by a host of Warriors in the end zone for a safety, sending two more points to Tafuna’s side of the board.

1:23 in the first quarter, and Tafuna decides to switch things up in their offensive attack, faking out the Wildcats defense with a play action pass, as Salave’a rolled out to fire a long pass to John Allen who hauled in a 48-yard reception to score Tafuna’s second touchdown.Nu’uuli was starting to lose their momentum, trying to halt the Warriors’ run-n-gun strategy. The Wildcats suffered, giving up another 6 points when they had a perfect coverage of the pass, but forgot to cover the speedy Salave’a who couldn’t find an open receiver, and took it straight through the middle.

Salave’a scored the Warriors third touchdown, extending the lead to 22-0

Going into halftime, Tafuna lost Salave’a to an injury andthey turned to Allen. The Warriors opted to go back to their ground game, a copy cat of the Vikings full house set. The move was successful, with the Warriors scoring one more touchdown - by Allen - into the half.

During the second half, Tafuna stuck to the full house set and ran with Allen and Soava to not only gain yardage, but to wind down the clock.

8:23 into the third quarter, and Soava crosses the goal line to score his second touchdown, putting the Warriors ahead by 34.        But Nu’uuli refused to go down quietly. The Wildcats defensive unit halted the Warriors running game, as Nathaniel Maea and his offense adjusted well to put points on the board.

Nu’uuli’s second down from their own 25-yard line, and Maea drops back to fire a bullet pass to Calloway Alosio who bounced off two Warrior defenders before hauling in that pass, dashing his way down the sidelines to score Nu’uuli’s one and only touchdown of the match.