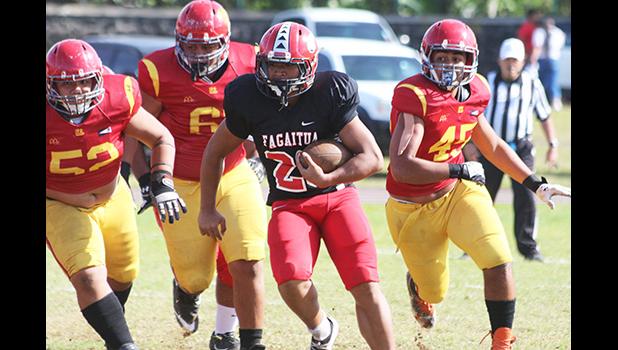 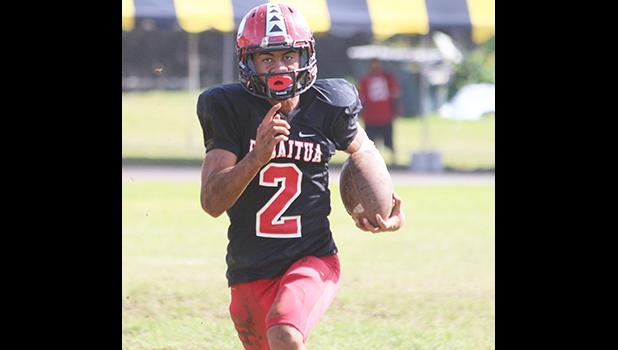 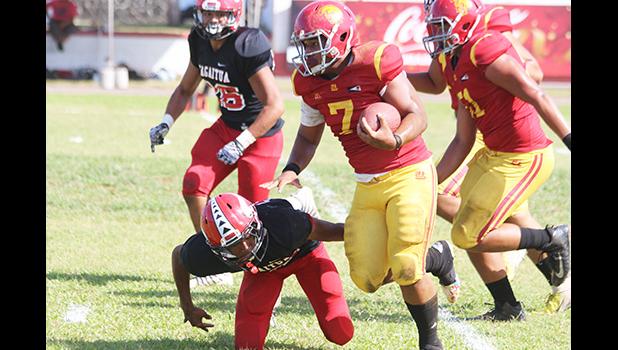 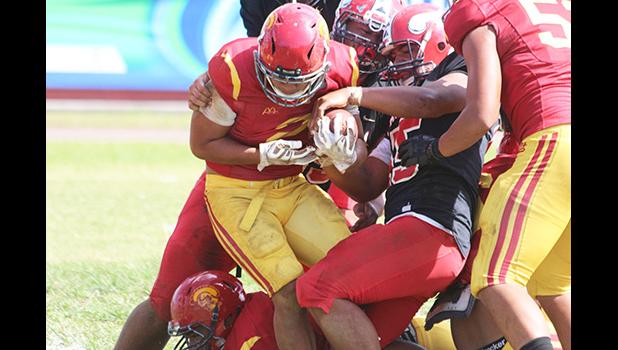 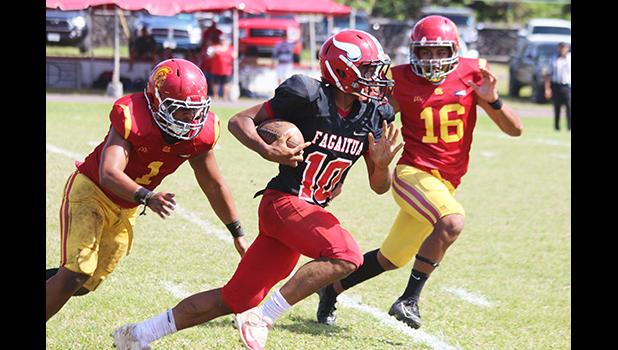 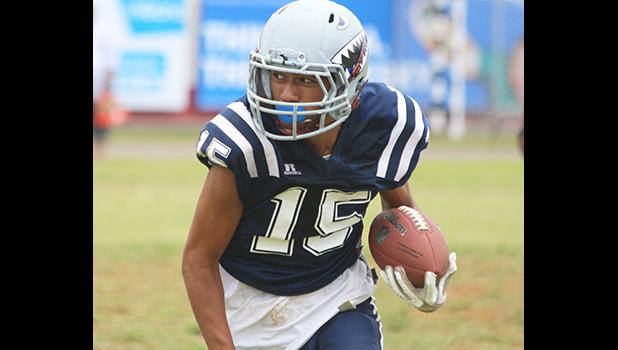 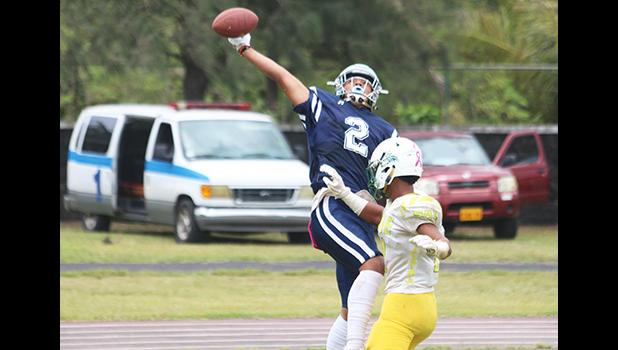 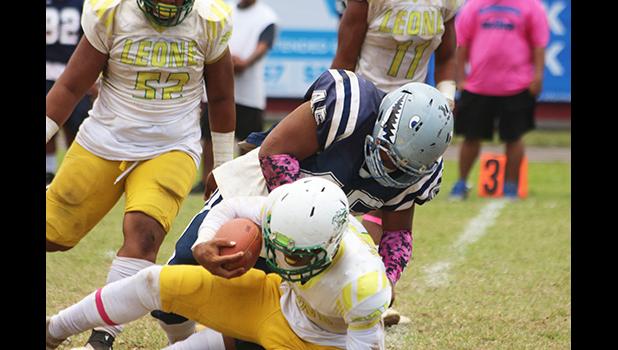 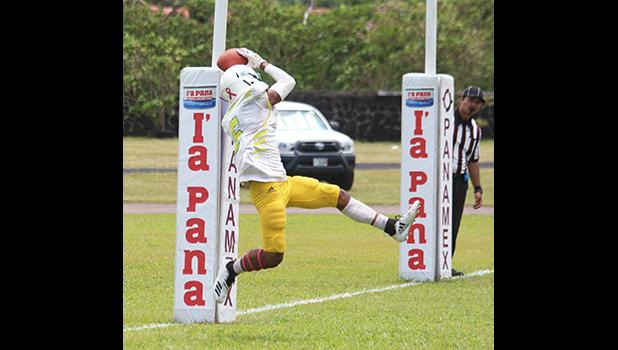 Pago Pago, AMERICAN SAMOA — The second round of ASHSAA’s football season officially kicked off this past weekend at Veterans Memorial Stadium, and it featured the Faga’itua Vikings prevailing over the Warrior Nation for the second time this season - a 10 point victory after a back-and-forth match that went down to the wire.

Head coach Sua’ese Pooch Ta’ase and his Vikings proved last Saturday that their running game can’t be stopped, as they ran their way right through the Warriors. Meanwhile, Samoana’s ‘Air Attack’ continues to wreak havoc, dismantling the Lions defense.

The Vikings - one of the teams without a passing quarterback - were determined to run the ball, and they did it with attitude. But that wasn’t the case in the first half. Tafuna made sure they had control of the game during the opening half, after Oakland Salave’a sent Koison Ozu straight up the middle for a 9-yard touchdown reception with just 6:59 into the first quarter.

Late in the first, Tafuna’s defense was penalized for a 15-yard pass interference and this gave the Vikings an opportunity from the 10-yard line. Fitu Amata ran straight up on a quarterback keeper to score the Vikings first touchdown. The two point attempt was a reverse hand off to Scott Pese, putting the Vikings ahead 8-6 with just 2:45 remaining in the opening quarter.

Tafuna pounced back with a couple of passing plays to John Allen, and this moved the ball downfield real quick and spotted a first and goal at the 10-yard line. From there, Salave’a sent Petesio Iosefo straight up the middle to score the Warrior’s second touchdown. The two point attempt was good and put Tafuna up 14-8 with 10:11 into the second quarter.

But the Vikings were unstoppable, as they continuously ran the ball towards Tafuna territory. Faga’itua’s second down from their own 37-yard line, and Fitu Amata slips through the middle with an option quarterback keep and runs it all the way in for the Vikings’ second touchdown.

The two point attempt by Amata was good, putting the Vikings up 16-14 with 9:32 into the second quarter.          Tafuna was motivated to keep pounding the ball towards the middle. Late in the second quarter, Niko Soava, Iosefo, and Ozu pulled through to carry the Warriors into Viking territory. With just 3:12 remaining in the opening half, Salave’a sent Ozu to the far side with a pitch play, adding six more points for the Warriors, who led 20-16 at the half.

It was a scoreless third quarter.

Faga’itua kept Manuita Sofeni on the sidelines the entire first half, and unleashed the beast during the 4th quarter as quarterback – 10:10 into the final quarter, and the Vikings spot a threatening first down from the 15-yard line. Sofeni muscled his way through the middle to score his first touchdown.        The two point attempt by Sofeni put the Vikings up 24 20.

Returning the favor was Tafuna’s Petesio Iosefo, who led the Warriors in two huge carries to spot Tafuna a first down inside the red zone. From there, Salave’a sent Ozu straight up the middle to score Tafuna’s final six points - a 3 yard reception.

With just 2:27 remaining in the game, and Faga’itua getting the ball back at midfield, the Vikings hammer edthe nail in the coffin when Sofeni broke loose through the middle from Tafuna’s 45-yard line and scored the final touchdown of the match.

Head coach Pati Pati and the Blue Empire didn’t hesitate to go to the ‘Air Attack’ to score their first six points of the game when Viliamu Tanielu found Avery Seumanutafa in the end zone with a corner route pass.

Samoana revealed their strategy a bit too early and ti cost them, when they stuck with the passing game inside the red zone. Tanielu looked to fire a pass to Allen Seagai, but it was picked off by the Lions and brought to the 1-yard line, bringing out Fa’alili Fa’amoe and his offense.

When Fa’amoe and the Lions offense came to the 1-yard line, a pitch play to Joshua Ta’ani moved the chains downfield, but then a flag was thrown inside the end zone and Leone was penalized for holding, which resulted in a ‘Safety’ that put 2 more points on Samoana’s side.

Samoana continued to go to the air to move the chains downfield; and after two good receptions to Kobe Lefiti, Samoana was at the 1-yard line. From there, Tanielu sent Samson Leulu straight up the middle to score the Sharks second touchdown, 14-0 with 42 seconds in the opening quarter.

Samoana’s offense continued to convert on downs after Tanielu ran in a 20-yard reception on an option quarterback keep. Tuala Fa’atonu then intercepted a pass from Fa’amoe, and turned it upfield for a pick six to score another Samoana touchdown.

Fa’amoe led the Lions to a second touchdown after they kept it on the ground. They were back in the game after Fa’amoe opened up the third quarter with an I-Formation. But Samoana silenced the Lions when Tanielu found Seumanutafa on a long route midway through the third quarter. The two point attempt was a pitch play to Johnson Talauega was good.

Fa’alili Fa’amoe and his offense pulled through on a third and goal situation and brought Lions back 18-42. The two point conversion by Fa’amoe was good and they trailed 20-42 with 5:23 remaining in the third quarter.

Late in the match, Tanielu hooked up with Seumanutafa on a big conversion to spot a first down inside the red zone. Tanielu went to Kobe Lefiti on a pitch play to score Samoana’s final touchdown - a 3 yard reception.