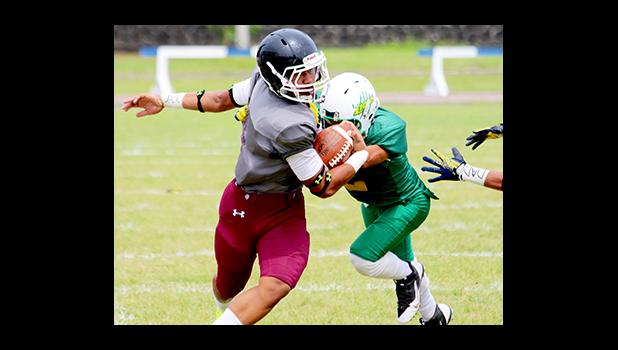 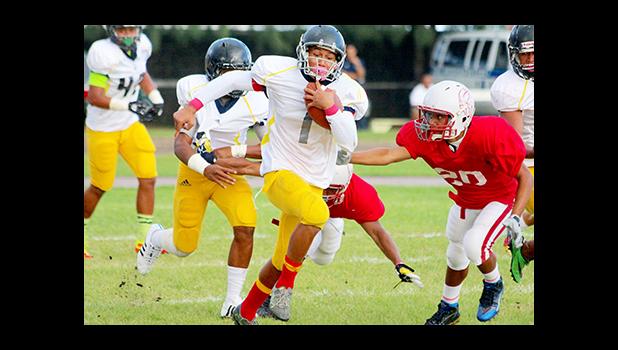 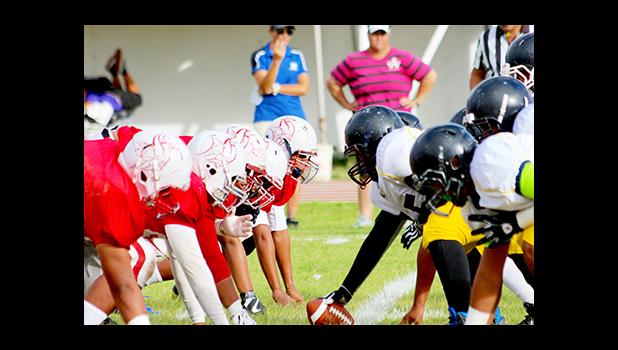 Nu’uuli Wildcats offense, moments away from snapping the ball against a hungry and vicious Faga’itua Vikings defensive front – Faga’itua played the Wildcats to record their second win of the season after a 31 - 14 victory. [photo: TG] 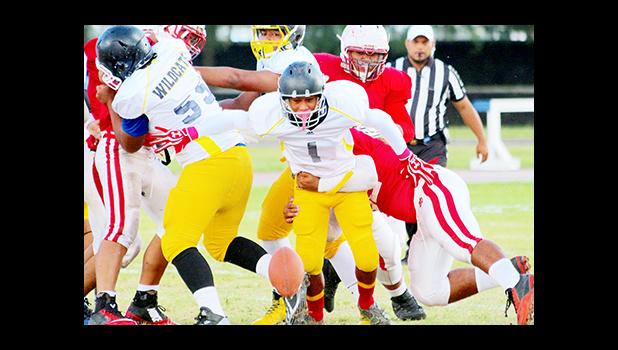 In Junior Varsity competition, the Warriors JV program remains undefeated in their divisional round ups after crushing the Lions last Saturday as the undercard match to the main event of the day, in a 50 - 18 win over Iverson Ta’ase and the Leone Lions who’ve just marked their second loss of the season.

The JV Vikings Georgia Mageo led Faga’itua over the Wildcats with three touchdown runs, as he was one of the toughest ball carriers to bring down this year in their division – and he and his twin brother, Vikings middle linebacker, are only 8th graders at Pago Pago Coleman Elementary School.

Head Coach Kolose Ili and his Warriors Football Program shed some light on the Lions — about what’s to come in the near future, after a punishing 50 - 18 victory against Leone. Leone’s Iverson Ta’ase led the Lions in trying to hold the fort down – but Tafuna’s Panapa Filo’iali’i and the Warriors offense were too hot to handle.

Filoiali’i scored three touchdowns that led the Warriors far ahead of Leone in the opening half of the match – Koison ‘the Samurai’ Ozu gave the Lions quite the hard time as well as he was one of the hardest runners to bring down.

With the help of their offensive line in the second half, Tafuna managed to clearly break ahead with a 30 point lead – Titania, Heather and the rest of the Warriors defensive unit were shocked when Ta’ase and the Lions came back, and scored on long pass to Ben Tikeri who showed how fast he was after separating from his man in quite a distance.

Tafuna brought a rage two times worst than in the second half, they ran up the scoreboard – even with a few minutes left, the Warriors punched it in, emphasizing that they’ll be no mercy for their division this year, as they’re the only undefeated up to now, after that 50 - 18 win.

Georgia Mageo and his twin brother Georgie Mageo from Pago Pago, are probably two of the youngest in the league this year. They are two of the toughest 8th graders at Pago Pago Coleman Elementary School, to help lead the Vikings to their second victory of the season.

While Georgie leads the Vikings defensive unit at middle linebacker as the leading tackler on the squad – the twin, Georgia leads their offense as the top scorer of the game, making three end zone appearances that led the Vikings to victory.

The opening half of the game, Mageo scored the opening touchdown with an unstoppable running game that Leone could barely keep up with, as Head Coach Ta’ase stuck to his option running game, that opened up opportunities for them in the air.

Nu’uuli’s Jeffery Tago, the Wildcats defensive beast at middle linebacker – surely stood out from the rest, as he led the Wildcats in numerous stops against Mageo and their running game. Nu’uuli came back with a long counter play to the hands of Joseph Mauga, who racked up both touchdowns for Nu’uuli.

Even though the lost against the Vikings, the Wildcats are still showing signs of improvement in the current season – who knows, they might even shock everyone around play-off.

As for the Vikings, they have been known to be the second half team throughout the years – they just might have the strength to have back-to-back wins into the play-offs.