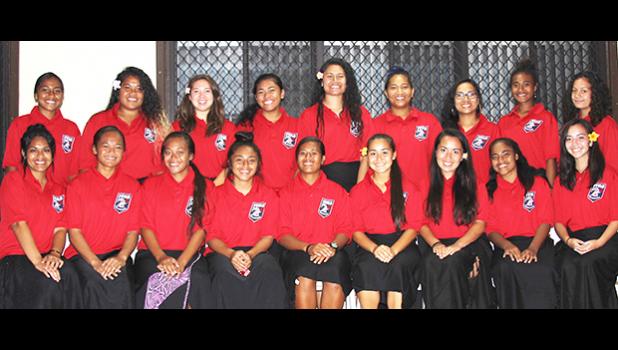 Lautoka, FIJI — For the first time in 11 years, American Samoa’s Women’s National Soccer Team will take to the field in an official FIFA/OFC tournament.

On Aug. 24 at Churchill Park in Lautoka, Fiji, they will face off against the Solomon Islands in the OFC Nation’s Cup qualifying stage tournament. The other two teams in the four-squad qualifiers are Vanuatu and hosts, Fiji.

In 2007 American Samoa’s women’s team competed in the XIII South Pacific Games in Samoa, and it doubled as the OFC’s Olympic Games’ qualifiers. The 2011 version of the Pacific Games in New Caledonia was not a FIFA/OFC sanctioned event.

“It has been a very long time since we’ve had a women’s senior national team represent us at a competition, and with that in mind, this is going to be a very exciting tournament for our players, our management, and especially our association,” said FFAS President, Sen. Faiivae Iuli Alex Godinet.  “This is a step up from our participation in the women’s U-16 team last year in Samoa, so our women’s side of the game is slowly, but surely, moving in the right direction.”

Faiivae went on to say that planning for this women’s team has been in the works since earlier in the year, with local players training at the association’s field in Pago Pago. Faiivae and the executive committee handed the reins to Larry Mana’o as the head coach for this team. He was also coach of the women’s national team in 2011, and the men’s counterpart in 2015.

Mana’o sought out eligible players in the U.S., and along with assistant coach Ati Faamau-Samuelu, Craig Tomlinson and FFAS staff — Technical Director Rupeni Luvu, and Development Officer Tunoa Lui — made the final selection of 18 players to represent American Samoa at the OFC Nation’s Cup qualifiers.

Of the 18 players, 10 of the selected are from the U.S., while eight live in the territory. Of the 10 that live in the U.S., two were born in American Samoa (Ashley Hall and Louisa Mavaega), while two others played on the 2011 squad (sisters Alma and Ava Mana’o).

“This is a different look for our team, we have more different players from different places, a shorter amount of time to prepare, and I think the team chemistry is better than the team that we took to New Caledonia (in 2011),” Mana’o explained.

He added that, “the difference between that (2011 team) and this experience is like night and day, so I feel this team is definitely stronger. The chemistry, the spirit, and technical ability of the girls this time prepares us a little better.”

Many of the locally based players selected for the team represented American Samoa at the OFC Women’s U16 Championship in Samoa last year, and are have enough skill and talent to make a run for a starting spot.

The U.S. based-players not born in the territory play soccer in college, and are eligible to play for American Samoa through either one of their parents or grandparents.

“The experience this time, a lot of these kids are a younger than the teams we’ve take in the past for our senior women, so it will be a positive experience regardless of what happens,” Mana’o said. “This will be a great opportunity for them to see different levels of experience out there from different competitions.”

The team departed for Samoa on Aug. 16 and spent four days there playing two warm up games. They played against a representative Samoa team, drawing in the first game 1-1 and losing in the second 1-0 two minutes before full-time.

All three teams competed in the 2017 Vanuatu Pacific Mini-Games, and all games were streamed online, giving Mana’o an opportunity to scope out the competition. Vanuatu and Fiji played in the gold medal game with the former winning 2-1, while the Solomon Islands lost to Tonga in the Bronze medal match.

“Vanuatu and Solomon Islands were in medal contention (at Pacific Mini-Games),” Mana’o pointed out.  “I think (both teams) are well organized on defense, and are very physical and athletic.”

Mana’o, and a few of the US-based players, are based in Seattle, Washington, making them familiar with one of Fiji’s players, Trina Davis.

“Fiji has a girl from Seattle, she is a world-class sprinter, one of our coaches trained her, so we know who she is,” Mana’o said. “Fiji has two solid players in a midfielder and a forward, they played in the U19 competition, they are very good and skillful, so we know they are well organized and they will have a strong defense.

“Fiji will, as well as being the home team and host nation, will be one of the tougher teams in this tournament,” he added.  “I think that of the skillful teams out of the four, if someone were to look at it from the outside, will say Fiji is probably the most technical organized team. We are somewhere in between, we’re definitely not the most physical team, but I think that we hopefully that we with the balance of technical ability and athleticism and youth we bring, we can compete.”

The winner of the qualifiers will move on to the second stage in New Caledonia later this year.  All games will be streamed live, and the link can be found on OFC’s website, www.oceaniafootball.com

FFAS vice-president, Sandra Fruean, and FIFA Council Member is Head of Delegation, while FFAS executive committee member Amio Mavaega-Luvu is the team’s manager. There are four assistant coaches, Faamau-Samuelu, Luvu, Lui and Tomlinson, a former Jamaican men’s national team player who plies his trade as a coach in Seattle. Iopu Kaleopa is the team’s physiotherapist.