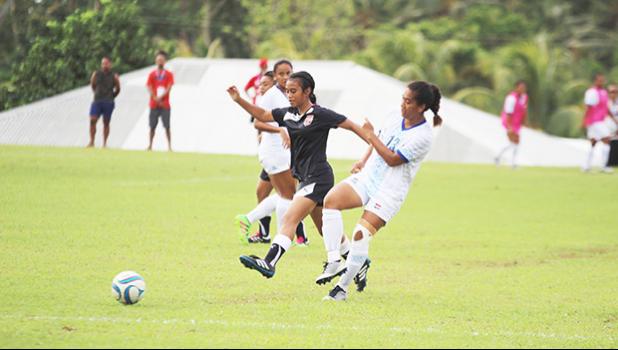 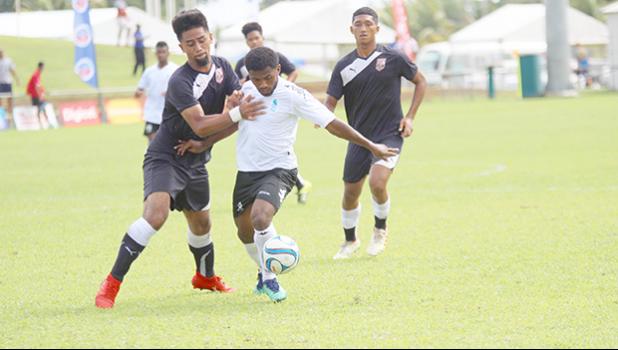 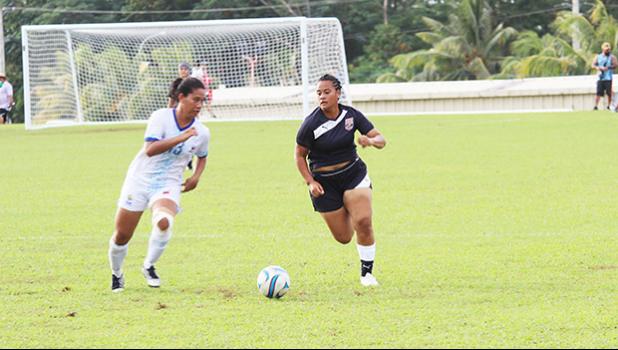 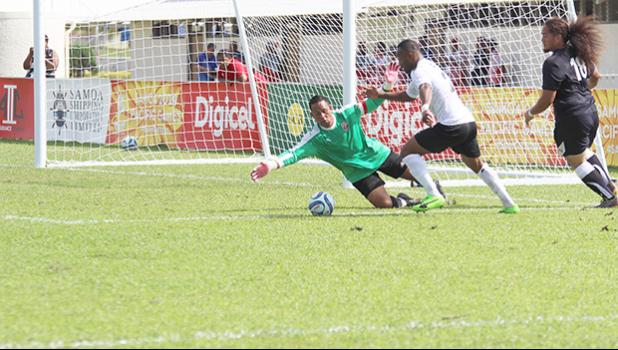 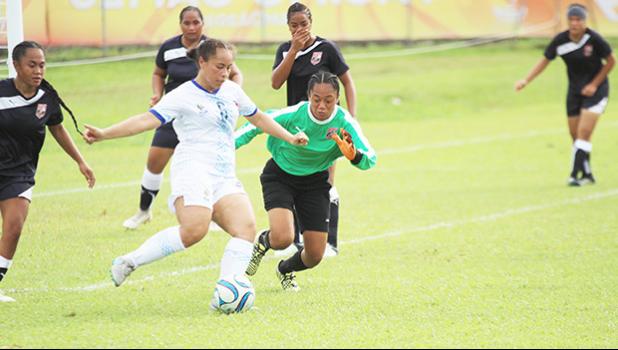 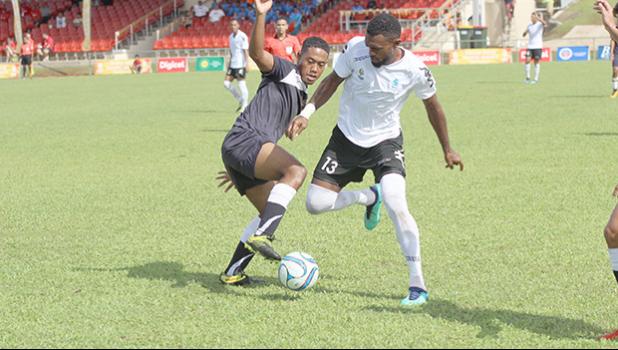 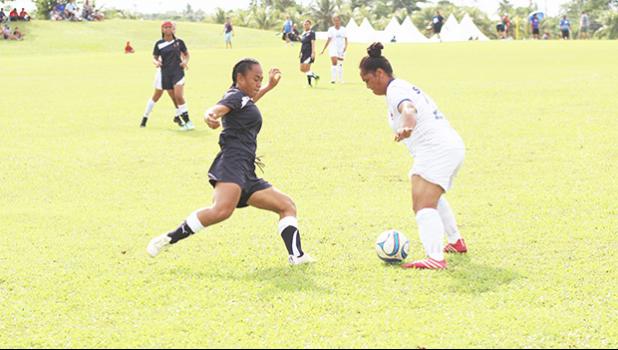 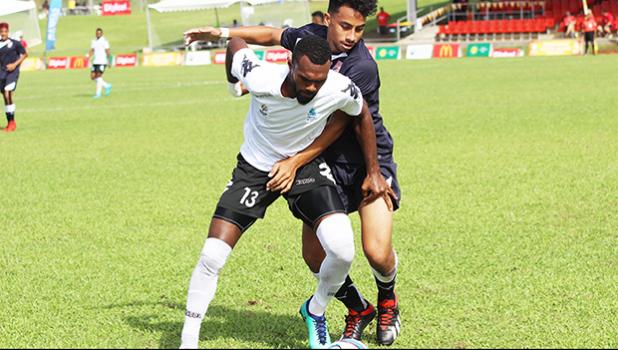 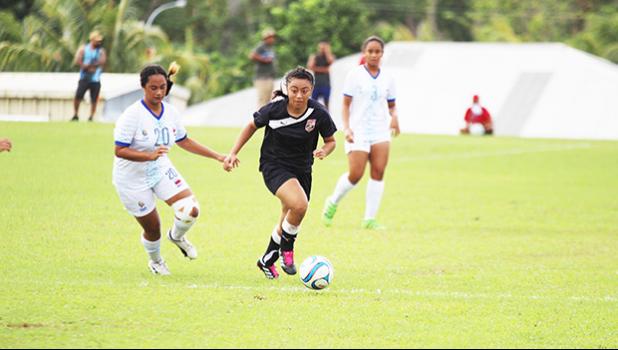 Apia, SAMOA — American Samoa’s women’s team dug their heels in and defended like their lives depended on it to hold on to a 0-0 draw against hosts Samoa on Match Day 2 of the 2019 Pacific Games.

The team had a lot of supporters at the field cheering them on July 10, 2019 at the Toleafoa JS Blatter Soccer Field in Tuanaimato.  They were made up of the American Samoa delegation of athletes and coaches, as well as families of the players from Samoa and back home.

With the backing of a good numer of supporters, Rayxena Fomai led the way with great goalkeeping, stopping attack after relentless attack, and coming out of her box to attack the ball when needed.  But it was a team effort in ensuring they earned at least a point in the competition, with the defenders and midfielders all working together in defense.

Beulah Oney, the team’s captain, worked overtime for the team, playing midfield and then dropping back as a defender to help the back four repel Samoa’s attacks.  Elcy Lui also played a similar role as Oney, plus going on the attack as one of the team’s most potent weapons in that regard.  When an attacking moment occurred, in stepped Saono Enesi to stop it.  Different players stepped up defensively, and all culminated in helping American Samoa hold off Samoa from scoring.

Olivia Vaiomounga used her speed to run down attackers that got through.  Susanna Lutali was a tackle machine, winning the ball away many a time.  Precious Ieremia made use of the time she was on the field before cramps forced her out of the game, and even Eseta Enesi chipped in with successful tackles of her own.  Eliza Berondo was feisty on the field as a 67th minute substitute.

But the star of the show was Fomai, diving left and right to stop shots, leaping to high balls and then streaking out to close down on attackers.  Her performance earned her new fans from other countries watching the battle of the two Samoa on the soccer field.

“My girls gave 110 percent out there today, it was their best performance out on the field and I’m so proud of them,” said the team’s head coach, Ati Faamau-Samuelu.  “It was very emotional at the time, but it’s not going to stop us from here, we have another game to focus on.”

She said that the coaches preached defense during their practice the day before the game.

“We told them we need them to defend really hard from the back,” Faamau-Samuelu explained, “and they did exactly what we practiced.”

They made only one change in their lineup from their game against Fiji, moving Reinnette Noa in for Pule Sagote.

As for Samoa, they sat out seven players that helped them beat Tonga 5-0, but this squad was still able to win the possession stat.  Samoa was technically better than the visiting team and were able to string passes that helped them move into American Samoa’s territory throughout the entire match.  They also dominated with shots on goal, but American Samoa dug in their heels, reached deep into themselves to unearth a draw with a big crowd of supporters.

“Samoa’s team had a lot of chances, but our girls managed to hold them at the front and put them down,” Faamau-Samuelu explained.  “We want to thank our supporters, the athletes, coaches and all of ASNOC that came out to support us here during the game.”

Lui and Oney were the team’s best chances at scoring, but when they had opportunities and took shots, it was too far to be effective, or their strikes came off of weakened legs.  Their attacking opportunities and were too far and too few in between.

American Samoa men’s team lost big to Fiji, seeing nine goals scored against them on Match Day 3 of the 2019 Pacific Games Samoa on July 10 at the Toleafoa JS Blatter Soccer Field in Tuanaimato.

Despite the score, American Samoa showed some fortitude in the first 20 minutes of the game, holding Fiji scoreless with a 4-5-1 formation.  Fiji could have scored much earlier, but nerves got the best of them with shots caroming off of the goal posts and crossbar, or goalkeeper Nicky Salapu making great saves.

The team kept their shape and compactness for most of the first half, but when they broke down Fiji was able to capitulate.  Tito Vodowaqa scored four goals for Fiji, and his first two were the first ones of the game coming in the 20th and 24th minutes.  Both could have been avoided but American Samoa’s defense broke down with players not getting back in position to help stop the goals.

The last two goals of the first half came 10 minutes apart, in the 36th and 46th minutes, again when the team’s defense broke down from great passing and running on to passes by Fiji’s players.

In the last half, goals came within minutes of one another when American Samoa’s defense lapsed again.  Fiji scored their next two goals during the 49th and 50th minutes to make it 6-0.

“We played very well in the beginning of the game, maintaining our shape and focus,” said the team’s coach, Tunoa Lui.  “But our players started to lose their shape and it allowed Fiji to take advantage.”

Goalkeeper Salapu played another solid game again, and American Samoa made two changes to its lineup, resting Jaiyah Saelua and MJ Faoa-Danielson while putting in Kuresa Taga’i and Chris Faamoana.

Faamoana played as the lone striker up front and did a decent job chasing after the ball, while Takai Pouli also had a solid game on the right wing.  Because of the intensity of the speed of the game, it took its toll on the American Samoa players as they became slower to cover the gaps or the dribbler.

The men’s team has a day off before next facing off against Tuvalu on July 12 (July 11 American Samoa date) at 9AM.