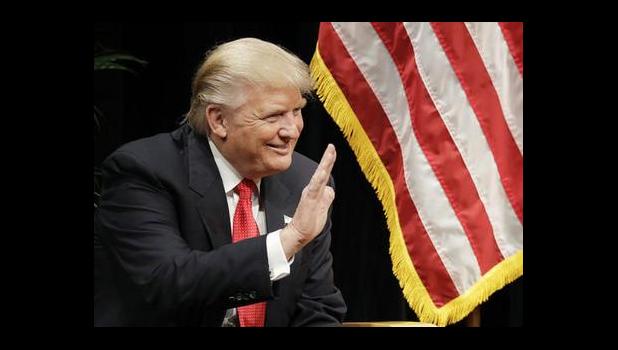 WASHINGTON (AP) -- For all of his occasional restraint, Donald Trump offered debate viewers a greatest-hits collection from his history of mangled facts, with some new ones thrown in. For all of her policy sobriety, Hillary Clinton was far from flawless.

People who had somehow avoided the campaign until the opening presidential debate heard with fresh ears Trump's bogus claims that he opposed the Iraq war before it started and that he never branded climate change a made-in-China hoax. For people who've been paying attention, everything old was new again.

A sampling of the statements from Monday night and how they stack up with the facts:

TRUMP, when Clinton said he paid no income tax for several years: "That makes me smart."

THE FACTS: Savvy tax planning was why he avoided paying taxes in those years. It was because he was losing money.

For at least two years in the early 1990s, the businessman posted losses that were large enough to cancel out any gains he would have had to report from his creditors writing down his debts. That is known because Trump had to show tax returns then to New Jersey gaming regulators to get a casino license. He's otherwise refused to make his returns public.

CLINTON: "When I became secretary of state, Iran was weeks away from having enough nuclear material to form a bomb. They had mastered the nuclear fuel cycle under the Bush administration. They had built covert facilities. They had stocked them with centrifuges that were whirling away."

THE FACTS: Not so. Iran moved to being as close to weeks away from bomb-making capability during the Obama administration, when she was secretary of state, not under President George W. Bush.

On the day Clinton was confirmed as secretary, David Albright, a former chief U.N. weapons inspector, wrote that "Iran appears to need at least another few months to accumulate enough low-enriched uranium to have a break-out capability." And some U.S. intelligence officials at the time were estimating that Iran could be still a year away from such capability. U.S. officials only began citing a time-frame of weeks as they closed in on a final deal with Iran in 2015.

TRUMP, when asked why he continued to raise questions about Barack Obama's country of birth even after the president produced his birth certificate in 2011: "Nobody was pressing it, nobody was caring much about it."

THE FACTS: Trump himself continued to press false theories about Obama's birthplace after they were debunked. His claim that the matter faded when the birth certificate came out belies his efforts to keep the myth alive.

TRUMP, denying Clinton's accusation that he supported the Iraq war: "Wrong. Wrong." Later: "That is a mainstream media nonsense put out by her.... I was against the war in Iraq."

THE FACTS: There is no evidence Trump expressed public opposition to the war before the U.S. invaded, despite his repeated insistence that he did. Rather, he offered lukewarm support. He only began to voice doubts about the conflict well after it began in March 2003.

His first known public comment on the topic came on Sept. 11, 2002, when he was asked whether he supported a potential Iraq invasion in an interview with radio host Howard Stern. "Yeah, I guess so," Trump responded. On March 21, 2003, just days after the invasion, Trump said it "looks like a tremendous success from a military standpoint."

CLINTON: "We're working with NATO, the longest military alliance in the history of the world, to really turn our attention to terrorism."

THE FACTS: When it comes to longevity, NATO takes a back seat to the Anglo-Portuguese Alliance, the Peloponnesian League and numerous other military alliances.

The Anglo-Portuguese Alliance, still in effect, is either 643 years old or 376 years old, depending on whether the start date is considered to be before or after a rupture along the way.

The Peloponnesian League, organized and led by Sparta, lasted 200 years, from the 6th to 4th centuries BC.

CLINTON, denying Trump's accusation that she called the Trans-Pacific Partnership the "gold standard" of trade agreements: "No ... I did say I hoped it would be a good deal."

THE FACTS: Trump is correct. On a 2012 trip to Australia as secretary of state, Clinton said the deal taking shape "sets the gold standard in trade agreements." She championed it in other venues around the world. She did not merely express the hope it would turn out well.

Clinton flip-flopped into opposing the trade deal in the Democratic primary when facing Bernie Sanders, who strongly opposed it. She said the final version of the deal didn't address her concerns. But the final version actually had been modified to try to make it more palatable to liberal critics.

TRUMP, when Clinton accused him of calling climate change a hoax invented by the Chinese: "I did not. I did not."

THE FACTS: He did, he did, in the form of a 2012 tweet: "The concept of global warming was created by and for the Chinese in order to make U.S. manufacturing non-competitive." He later claimed he was kidding, but he's also repeated the claim that climate change is a hoax, and one that benefits China.

He tweeted in January 2014: "Snowing in Texas and Louisiana, record setting freezing temperatures throughout the country and beyond. Global warming is an expensive hoax!"

CLINTON called for "making college debt-free so more young people can get their education."

THE FACTS: Clinton has proposed making college tuition free for in-state students who go to a public college or university. But tuition-free doesn't equate to debt-free.

Under her plan, the government would pay for in-state tuition at public colleges and universities for students from families earning less than $125,000 a year. That would leave students still bearing the cost of room and board, which makes up more than half of the average $18,943 sticker price at a four-year public university, according to the College Board.

THE FACTS: Hillary Clinton was born in 1947 and is 68 years old. She reached adulthood in 1965. The Islamic State group grew out of an al-Qaida spinoff, al-Qaida in Iraq in 2013, the year Clinton left the State Department.

THE FACTS: Trump got a whole lot more than a small loan. Aside from $1 million in financing from his father, Trump received loan guarantees, bailouts and a drawdown from his future inheritance. Tim O'Brien noted in a 2005 book that Trump not only drew an additional $10 million from his future inheritance during hard times, but also inherited a share of his father's real estate holdings, which were worth hundreds of millions when they were eventually sold off.

TRUMP: "You don't learn that much from tax returns."

THE FACTS: Americans stand to learn plenty if he releases his tax returns like other presidential candidates have done.

They would provide vital information about his wealth, taxes paid, tax avoidance efforts, exact amounts of real estate holdings and charitable donations that can't be gleaned from any other source. For these reasons, every major party candidate for the last 40 years has released at least a few years of recent tax returns.

THE FACTS: There are no official data on job flows between countries. However, the U.S. economy has added nearly 14.9 million jobs since 2010, when the economy bottomed out after the recession.

Since GM and Chrysler declared bankruptcy, the auto industry in particular has recovered and resumed hiring. The industry has added 300,000 jobs since June 2009, when the recession ended. Ford has announced it is moving production of small autos to Mexico, but says it won't cut any U.S. jobs because it will make other vehicles at the affected plant.

CLINTON: "Independent experts have looked at what I've proposed and looked at what Donald's proposed, and basically they've said this, that if his tax plan...were to go into effect, we would lose 3.5 million jobs and maybe have another recession. They've looked at my plans and they've said...we will have 10 million more new jobs."

THE FACTS: Those numbers come from one expert, Moody's Analytics chief economist Mark Zandi, a widely respected analyst but one who has also donated to Clinton's campaign. His estimate that Trump's plan would cost 3.5 million jobs was issued in June 2016, and Trump has altered his tax cut proposals and other policies since then. And Zandi estimated Clinton's policies would actually create 3.2 million more jobs over 10 years, not 10 million. An additional 7.2 million would be created under current law, Zandi calculated.