Experts: US exiting climate pact may doom some small islands 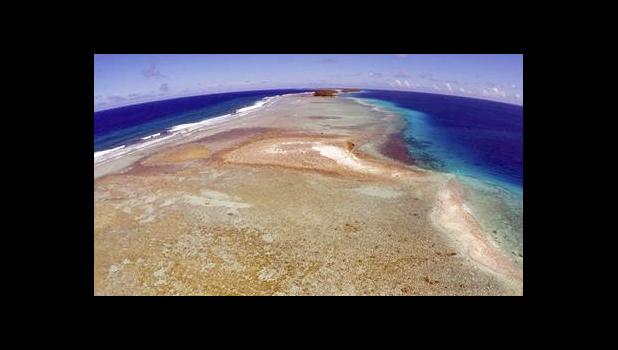 WASHINGTON (AP) — To small island nations where the land juts just above the rising seas, the U.S. pulling out of the Paris global warming pact makes the future seem as fragile and built on hope as a sand castle.

Top scientists say it was already likely that Earth's temperatures and the world's seas will keep rising to a point where some island states may not survive through the next 100 years. That likelihood increases, they say, if the United States doesn't follow through on promised cuts in heat-trapping carbon dioxide emissions. President Donald Trump this month said he'd withdraw the United States from the climate deal , prompting leaders of vulnerable islands to talk about their future with a mixture of defiance, hope and resignation.

"If we really push into action, we can save some (small islands) but we may not be able save all of them," said Hans-Otto Poertner, a German scientist who chairs the climate impacts study group for the United Nations' Intergovernmental Panel on Climate Change. "The chances are even less with the U.S. pulling out of the climate agreement in Paris."

While calling Trump's announcement "deeply disappointing," Marshall Islands President Hilda Heine told The Associated Press "I cannot give up on my people and my country and my culture. It's very important for us to be optimistic."

Heine and other island leaders are putting their hope in strong pollution curbs by China, other nations, individual American states and cities, as well as improved technology. While visiting Europe, she said "it's all the more important that Europe takes the lead on climate change."

Palau 's environment minister F. Umiich Sengebau said he has no choice but to cling to hope.

"Right now some of the islands have disappeared," he said. "And so if we continue this trend our very existence as small islands could very well disappear in many instances."

The U.S. State Department said it considers engagement with other counties on climate change important and it will continue, including with small island states. Secretary of State Rex Tillerson said after Trump pulled out of the agreement that the U.S. has cut its carbon dioxide emissions "dramatically" even before the Paris pact was reached.

When the Paris pact was being negotiated in 2015, small island nations successfully campaigned for a stricter but secondary target for limiting global heat-trapping emissions.

The world has already warmed about 1 degree Celsius, so the islands are really trying to prevent another half degree of warming Celsius (0.9 degrees Fahrenheit).

When Trump announced he would pull the U.S. out of the Paris treaty, scientists said that made the 2 degree goal close to unachievable and the 1.5 degree goal even more out of reach. Promised American pollution cuts were about one-fifth of the pledged global reductions hoped for in the accord. And even if all the pact's pledges were fully realized, it wouldn't stop warming from hitting 2 degrees without even stricter actions in the future, according to computer simulations.

"We are pushing the 1.5 (as a goal) but realistically I think we have passed the point that it can be achieved," said Kenrick Leslie, executive director of the Caribbean Community Climate Change Centre . Trump's Paris pull-out, he said, has "thrown it right out the window."

Small islands "are the most vulnerable parts of the world," said scientist Jim Skea of the Imperial College in London, who chairs another UN climate panel. Exceeding 1.5 degrees "really makes the vulnerability threat for them more acute. It's kind of existential."

Scientists and carbon emissions computer modelers at Climate Analytics helped the small islands in their campaign called "1.5 to stay alive", and they say it is still possible, though unlikely, to limit the warming to that much.

That scenario involves overshooting the 1.5 degree goal and then eventually allowing no new carbon dioxide emissions into the air. But even that isn't enough so the world would have to somehow pull huge amounts of carbon dioxide out of the air, which is technically feasible but not practical at the moment, said Climate Analytics scientific adviser Carl-Friedrich Schleussner.

Recent studies have shown that the sea level rise in the past decade or so has accelerated compared to previous decades, said University of Colorado sea level expert Steve Nerem. He estimates a meter of sea level rise by the end of this century and emphasizes it could be worse with ice sheet melts in Greenland and Antarctica.

"Anything over a meter (a yard) is catastrophic for these small islands," Nerem said.

And the islands don't have to be underwater to become uninhabitable, he said, because sea level rise will make them more vulnerable to high tides and extreme storms.

Warming over 1.5 degrees also is likely to be devastating for coral reefs - which many of these small islands rely on for their fishing and tourism economies, Schleussner said.

Between rising seas that could swamp population centers and infrastructure like airports and seaports all over the Caribbean, the damage to reefs and fishing with increased warming will hurt Caribbean people in the pocketbooks and in their stomachs, several Caribbean climate officials said.

Ahmed Sareer, the Maldives ambassador to the United Nations and chairman of the Alliance of Small Island States, said the 1.5 goal is harder to achieve without the United States but not yet impossible.

"The island spirit is to never give up," Sareer said. "We are always a resilient people."