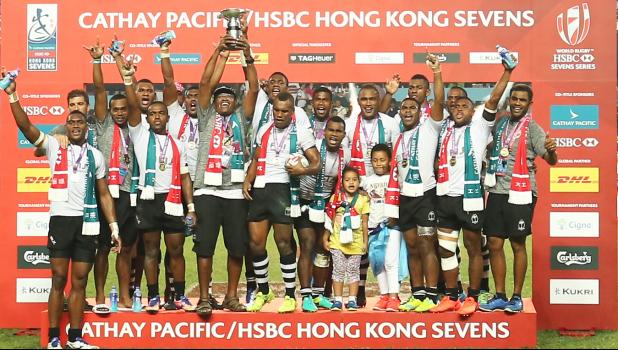 HONG KONG (AP) — Fiji won the Hong Kong Rugby Sevens for a record-extending 17th time on Sunday, beating South Africa 22-0 in a lopsided final to win their first tournament since the Rio Olympics.

Still rebuilding after several senior players and their former coach Ben Ryan left after winning the Olympic gold medal, the South Pacific Islanders ended their lean run this season in spectacular fashion by claiming the most prestigious event on the World Series circuit for the third year in a row.

Running their opponents ragged with a combination of power, pace and improvisation, Fiji opened up a 10-0 at halftime after tries from Sevuloni Mocenacagi and Mesulame Kunavula then put the result beyond doubt when Kalione Nasoko crossed twice more in the second half.

"There's been a lot of pressure," said Fiji captain Oseo Kolinisau. "At the start of this tournament, I told the boys let's not think about the three-peat, let's chase it like we're gunning for our first Hong Kong title."

The relief was evident too for new coach Gareth Baber, though the Welshman said the result would not reduce the expectations on Fiji to keep winning.

"There's always huge expectations on. The are the world champions and the Olympic champions for a reason," he said. "Ben did a fantastic job and now I have to try and pick up that baton and move it on.

"And even though we've got Olympians in there, they're still humble enough to know they can still add to their skill set."

For South Africa, the current World Series leaders, the long wait for their first Hong Kong title goes on after the Blitzboks finished runners-up for the fourth time.

They almost came unstuck in the semi-finals against the United States when they blew a 17-point lead before beating the American 29-24 in extra-time but were unable to raise their game in the final.

"We knew playing against Fiji in the final in Hong Kong that they were always going to up their performance by 10 to 15 per cent and that's what they did," South African coach Neil Powell said.

"That's not an excuse. We needed to absorb that pressure and not make mistakes ... so credit to Fiji, they played better than us and deserved to win."

Australia, beaten 33-12 by Fiji in the semi-finals, defeated the United States 26-19 to win the third-place playoff, their best result of the season.