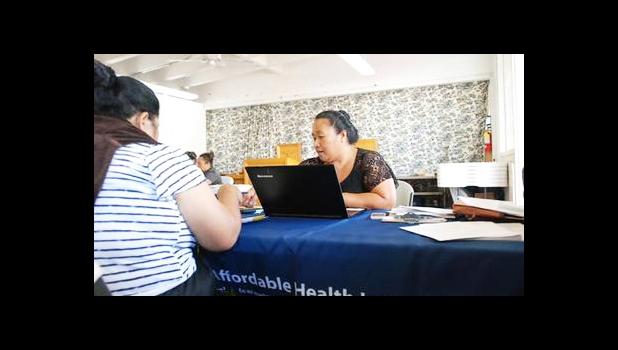 A small team of government and social service workers at folding tables helped Aliksa and others enroll in health plans Monday, despite uncertainty about whether President Donald Trump and a Republican-led Congress would completely repeal the law.

Concerned about the dissolution of the Affordable Care Act, Hawaii lawmakers are introducing bills to merge into state law the consumer protections they consider the best parts of the federal program.

The bills seek to guarantee insurers don't deny coverage based on pre-existing conditions, institute lifetime maximums for coverage or strip some of the benefits such as pregnancy care that were mandated by the federal act.

"Before the Affordable Care Act, a very sick child could use up all their lifetime benefits within days or months," said Rep. Della Au Belatti, chairwoman of the House Health Committee.

Since the Affordable Care Act was enacted in 2010, about 54,000 people in the state gained coverage, according to the federal Department of Health and Human Services. Nationwide, more than 10 million people had coverage through the act, the department said.

Because of the rapidly shifting discussion in Washington, many state lawmakers around the country are grappling with what kind of bills to introduce to preserve parts of the Affordable Care Act, said Richard Cauchi, health program director at the National Conference of State Legislatures.

"I think they're going to have a hard time with the replacement piece, and that's what worries me," said state Sen. Rosalyn Baker, chairwoman of the Senate Commerce, Consumer Protection and Health Committee. "They're going to repeal, but they're not going to replace because they can't get consensus."

The Hawaii bills, introduced in the House and Senate, both included a mandate that individuals purchase insurance - part of the federal law that encouraged healthy, young people to sign up, providing a funding source for the sicker patients insurance companies were forced to accept. The Senate bill was amended Tuesday to add an income tax credit, which could help people forced to buy health insurance to pay premiums. It's unclear whether there will be any federal funding available to help defray the cost for low-income customers.

"Without the federal money that would subsidize the cost, how would you make it affordable?" said Beth Giesting, a consultant lobbying for Hawaii Association of Health Care Plans. "If it's not affordable, you can't mandate it."

Without knowing what the federal government is going to do, "we're kind of working in the dark here," Giesting said.

At a hearing on the Senate bill Tuesday, Hawaii Medical Services Association, the state's largest health insurance company, provided questions and comments on the bill, but didn't support or oppose it. The company pulled out of the employer side of Hawaii's health exchange in 2014 complaining about technical problems at what was then a state-run exchange. It also, along with Kaiser Permanente Hawaii, has blamed some quarterly losses on expenses related to the Affordable Care Act.

The bills, introduced in the House and Senate, also seek to allow young people up to age 26 to stay on their parents' health insurance and to ensure that women aren't charged more than men for insurance.

Sowena Achen, 35, was helping take care of her four-month-old nephew Makana Albert while his mom was signing him up for insurance. Achen is worried about what will happen to her nephew and many families who hail from Micronesia if insurance under the Affordable Care Act ends.

"Without the insurance, would they be OK?" Achen said. "I'm scared sometimes."