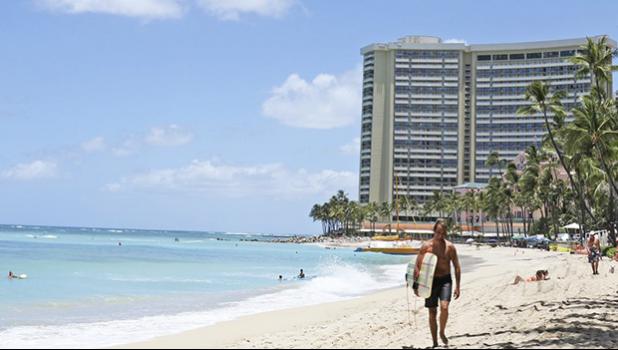 HONOLULU (AP) — Honolulu Mayor Kirk Caldwell said Thursday it’s not safe to follow through with a plan to allow out-of-state travelers to use a negative COVID-19 test to bypass a 14-day quarantine requirement beginning Aug. 1.

The mayor cited a surge in coronavirus cases in California and other U.S. mainland states where most of Hawaii’s tourists come from. He further pointed to declines in the state’s testing capacity as laboratories run short on testing supplies due to high demand for those same supplies in other states.

“We know that right now the COVID-19 is on a rampage throughout the state of California. And they’ve lost control of the virus. And so we’re concerned as visitors come here that they may be bringing the virus with them,” Caldwell said at a news conference.

The traveler testing plan would allow those coming from out of state to skip a requirement that they self-quarantine for 14 days if they test negative for COVID-19 within 72 hours before arriving.

The Honolulu City Council on Wednesday urged Hawaii’s governor to consider delaying the plan until the rate of new coronavirus cases on the U.S. mainland and in Hawaii drops significantly.

Caldwell said the state’s four county mayors met with Gov. David Ige on Wednesday to discuss the issue but did not reach a conclusion. He said they agreed to think it over and talk again Thursday.

Caldwell acknowledged that many who work in the tourism industry will struggle until it’s easier for visitors to come to Hawaii.

“How do we address getting people back to work with keeping our residents safe? And it’s not one or the other, it’s finding that balance,” he said.

The near-total collapse of Hawaii’s tourism industry due to the pandemic has pushed the state’s unemployment rate to 22.6%, the second worst in the nation after Nevada.

Ige said in a written statement he was meeting with the mayors to discuss the situation.

“We are getting input from community leaders as we carefully consider the health and safety of our residents and the financial health of our communities because we know they are interconnected,” Ige said.

For most people, the new coronavirus causes mild or moderate symptoms, such as fever and cough that clear up in two to three weeks. For some — especially older adults and people with existing health problems — it can cause more severe illness, including pneumonia, and death.