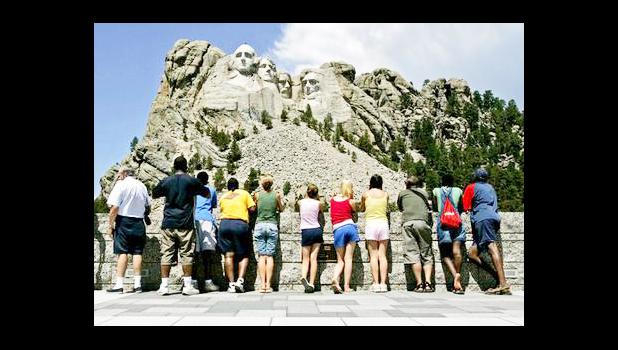 NEW YORK (AP) -- In his 4½ years as a state senator from Manhattan, Brad Holyman has handed out everything from flashlights to T-shirts at political rallies. But for a gathering held soon after President Donald Trump's inauguration, he decided on something more substantial:

Copies of the Constitution.

"My constituents had been asking me, 'What can I do to help?' 'How do I prepare myself?'" says Holyman, a Democrat in his third term who has since distributed thousands of copies. "A year ago, who would have imagined that giving away the Constitution would be seen as an act of resistance?"

Americans have disagreed about government and civic life since the country's founding, about who should vote, who should run for office and the risks of political factions. But as the U.S. nears its 241st birthday, many say democracy itself is in the dock.

Trump, with his labeling the mainstream press the "enemy of the people" and his disparagement of "so-called" judges and other traditional checks on executive power, has critics anxious about not just a given policy but the fate of self-rule - at the same time that his supporters view his rise as the kind of anti-elitist triumph democracy is supposed to represent.

The debate extends from classrooms and policy institutes to popular culture, to the Trump-influenced staging of Shakespeare's "Julius Caesar" at Manhattan's Public Theater and the wave of dystopian best-sellers such as "1984" and "The Handmaid's Tale."

"I think it's highly unusual and disconcerting to have so many people worried about the foundations of our democracy," says Wendy R. Weiser, who directs the Brennan Center for Justice's Democracy Program, based at New York University School of Law and focusing on voting rights and elections, among other issues. "We're always talking about democracy and struggling to live up to our ideals, but never with so many fundamental questions as we're doing right now."

But when activists vow to revitalize democracy, they don't mean the society imagined by the men who helped create it.

"None of the founders envisioned our modern democracy, with its broad suffrage and competing political parties," says Gordon Wood, the Pulitzer Prize-winning historian of the Revolutionary War era. "Running for office was demagogic and dangerous. The founders believed in equality but they essentially meant equality of opportunity. Sons of weavers and cobblers could go to college and become gentlemen, but weavers and cobblers themselves were not to become politicians and campaign for office."

American leaders in the early years exchanged accusations of being too pro-British or pro-French, a division marked by two ongoing concerns: The country would relapse into British-style monarchy or fall into violence and lawlessness like the murderous "Reign of Terror" during the French Revolution.

In 1788, the year before the French Revolution began, Americans were deciding whether to ratify the Constitution. One concern, James Madison wrote in the Federalist Papers, was "men of factious tempers, of local prejudices, or of sinister designs, (who) may by intrigue, by corruption or by other means, first obtain the suffrages, and then betray the interests of the people."

Some founders lived long enough to watch, and bemoan the political rise of Andrew Jackson in the 1820s. Trump and supporters have cited Jackson as a favorite predecessor in the White House, a populist who defied the establishment and broke down boundaries against who might become president. Trump ally Newt Gingrich, the former House Speaker, has written that Trump, like Jackson, is "an outsider and a disruptive force chosen to break up existing Washington power structures."

But Thomas Jefferson, in sentiments critics have echoed about Trump, worried that Jackson "had very little respect for laws and constitutions" and added that "His passions are terrible."

Historian Sean Wilentz calls Trump "almost a caricature of the Caesar-like character the (Constitution's) framers so deeply feared." Wilentz, whose books include "The Politicians and the Egalitarians: The Hidden History of American Politics," said, "Madison, et al., knew nothing of corporate glitz and reality TV. Otherwise, though, Trump is exactly the kind of figure whom the framers feared too much democracy would produce."

Stability mattered more than inclusiveness for the new country. George Washington essentially ran unopposed for his two terms as president, and was voted in by white, male landowners. Madison and others called the new government a republic, with a political hierarchy from local to state to federal, the leaders presumably becoming wiser and more dispassionate the further removed from popular whims.

Joseph Ellis, author of the Pulitzer Prize-winning "Founding Brothers" and biographies of Jefferson and Adams, said that even the Declaration of Independence was more an attack against monarchy than a manifesto for what today we would call democracy.

"Opposing monarchy doesn't mean there's confidence in democracy," he said. "And the function of the Constitution was to take democratic foundations and run them through layers of refinement that allow the government to separate what is popular in the short term from what is in the long-term interest of the people."

Over the past two centuries, the country has become more democratic than many of the founders wished - without ever reaching the standards activists have called for. Critics cite partisan gerrymandering, voting restrictions, the influence of money on elections and striking income inequality, saying the United States falls short of modern democratic ideals.

The Democracy Index, compiled by the British-based Economist Intelligence Unit, ranked the U.S. at 21st worldwide in 2016, tied with Italy and trailing Norway, Canada and Uruguay, among others. While Norway and several other Scandinavian countries are considered "full democracies," according to the index, the U.S. last year fell to "flawed democracy," receiving low scores for "functioning of government" and "political participation."

Within the accepted views of the time, the founders did differ widely on what kind of government they favored. Thomas Paine may have been the closest to what we now call an advocate for democracy. Jefferson was highly suspicious of federal power, at least until he became president, while Alexander Hamilton favored a strong chief executive.

"Like Jefferson, he (Hamilton) wanted a natural aristocracy to rule, by which both of them meant an aristocracy of talent, that is, men like themselves," Wood said.

"But his vision for America was to make it a great fiscal-military state like Britain with a standing army and navy and a huge bureaucracy and a British financial system, a state that would eventually be able to take on the European powers on their own terms, something that Jefferson and Madison found appalling."

By 1802, with his rival Jefferson in the White House and his own ideas under attack, "Hamilton was in despair and wrote, 'This American world was not meant for me,'" Wood said. "On the eve of his duel (with Aaron Burr) in 1804 he said that America's 'disease' was 'democracy.'"