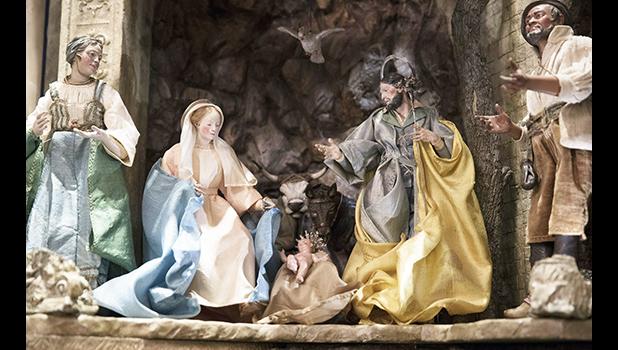 THE CLAIM: As part of this year’s “Christmas Traditions” display at the White House, first lady Melania Trump is bringing back a Nativity scene banned by the Obamas.

THE FACTS: The Nativity scene was not banned by the Obamas. It is on display in the East Room “for the 51st year,” according to a White House news release about the decorations. The theme of this year’s holiday decor, revealed by the first lady this week, is “American Treasures,” The Associated Press reported. It is not “Christmas Traditions,” as claimed in a social media post.

THE CLAIM: Photo is said to show a U.S. Border Patrol agent injured recently after being hit by a rock thrown across the U.S.-Mexico border in California.

THE FACTS: The photo of the agent with a bloodied face is being misrepresented. It has been circulating on social media to suggest that a Border Patrol agent was injured by a rock during a confrontation Sunday with migrants at the U.S.-Mexico border. Rod Kise, a public affairs officer for U.S. Customs and Border Protection, told The Associated Press that the photo was actually taken in 2010 after an agent was assaulted along the border in the Rio Grande Valley in Texas. He identified the agent as Randy De Leon, and said he was hit with a rock after he came across 10 to 15 people trying to bring drugs over the border. The photo was taken by the agency, Kise said, which is customary following an assault at the border. The AP reported that U.S. Customs and Border Protection Commissioner Kevin McAleenan said four agents hit with rocks during clashes at the border over the weekend were not hurt because they were wearing protective gear.

THE CLAIM: A photo of a migrant woman and two children fleeing tear gas near the Mexican border with the U.S. was staged.

THE FACTS: Reuters photographer Kim Kyung-Hoon said in a story published Tuesday by the news agency that he took the photo in Tijuana after tear gas was lobbed into a group of migrants near the border fence on Nov. 25, 2018. Kim identified the woman as Honduran mother Maria Meza, and her 5-year-old twin daughters as Cheili and Saira. The photo shows Meza running from the tear gas, pulling her children along with her. “Some social media users have called the photo ‘staged,’ which absolutely is not the case,” Kim said in the story. “At Reuters, we have strict photo guidelines. We are not allowed here to mislead the viewer by making material alterations or staging scenes.” Kim said that when the tear gas canister hit the ground he could smell the gas and could see children crying. He said at that point he too started running to get away from the gas. The Associated Press also reported the use of tear gas at the border Sunday.

THE CLAIM: The McCarran-Walter Act of 1952 bans Muslims from holding office in the United States.

THE FACTS: The act did not ban Muslims, or any other religious groups from public office; it upheld a quota system limiting immigration by country. While the 1952 act did discriminate by race and ethnicity, it placed no religious restrictions on who could hold elected office, Hiroshi Motomura, a professor of law at the University of California, Los Angeles, and immigration expert, told The Associated Press. The act upheld the race-based “national origins quota system” from the 1920s, which regulated how many immigrants could enter the U.S. from each country. In addition, Article VI of the Constitution states: “No religious test shall ever be required as a qualification to any office or public trust under the United States,” meaning that a person can hold office no matter their faith. The erroneous claim circulated widely following the election this month of two women who are Muslim to the U.S. House of Representatives: Ilhan Omar, of Minnesota, and Rashida Tlaib, of Michigan.