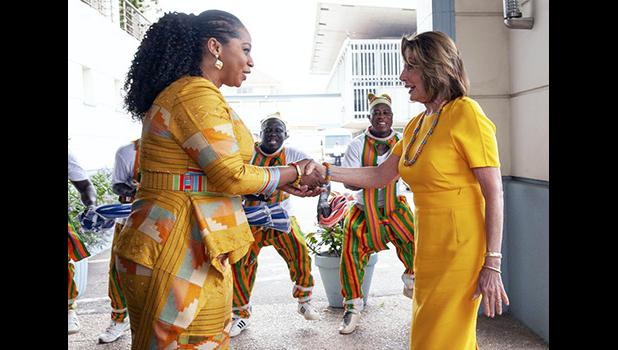 (AP) — A roundup of some of the most popular but completely untrue stories and visuals of the week. None of these is legit, even though they were shared widely on social media. The Associated Press checked them out. Here are the real facts:

THE FACTS: The photo, shared widely on social media, is incorrectly identified. It actually shows a Democratic congressional delegation in Ghana on Sunday, July 28, while on a diplomatic trip to mark the 400th anniversary of the slave trade. House Speaker Nancy Pelosi and members of the Congressional Black Caucus met with Ghana’s President Nana Akufo-Addo Monday and Pelosi addressed the country’s parliament Wednesday. In the photo, Pelosi, wearing a floral dress, stands in the middle of the congressional delegation, flanked by members that included House Majority Whip James Clyburn, chairwoman of the Congressional Black Caucus Karen Bass and representatives Barbara Lee, John Lewis and Ilhan Omar. The image was posted to Pelosi’s Twitter account Sunday afternoon. Her spokesman, Taylor Griffin, confirmed in an email to The Associated Press the photo was taken in Ghana that day. The delegation visited the U.S. Army Africa headquarters in Italy on Saturday, July 27.

THE FACTS: Posts circulating on social media falsely claim that Rep. Cummings was away from his Baltimore district on a diplomatic trip in Italy with Pelosi about the time Trump sent a flurry of negative tweets about conditions in his district. Cummings, a critic of the president who is leading investigations into Trump on the powerful House Oversight Committee, responded to the president’s comments tweeting on July 27, in part: “Mr. President, I go home to my district daily. Each morning, I wake up, and I go and fight for my neighbors.” But some of the president’s supporters falsely stated on Twitter that Cummings was not being truthful about his whereabouts, suggesting he was on an international vacation. A staff member for Cummings confirmed to The Associated Press Monday that the representative was in his district.

THE FACTS: An image being shared on Facebook that purports to show past presidential campaign buttons that equate Democratic policies with socialism was taken from an editorial cartoon. The buttons do not exist. Posts falsely claim that Republican Party buttons attacked policies under former Presidents Franklin Delano Roosevelt and Lyndon B. Johnson as “socialism.” The image, which has circulated online before and was revived in the wake of the Democratic debates this week, shows what appear to be two campaign buttons featuring the GOP’s elephant logo on it. “Say ‘no’ to socialism tell F.D.R. no Social Security,” one button in the picture reads, while the other button states, “Say ‘no’ to socialism tell LBJ - no Medicare.” The buttons were part of an editorial cartoon, published in November 2009 by the Daily Camera, a newspaper in Boulder, Colorado. The cartoonist, John Sherffius, did not immediately respond to a request for comment. The original cartoon also featured a third faux button that read, “Say ‘NO’ to socialism tell Obama NO HEALTH CARE.” The cartoon was published while former President Barack Obama was working to pass the Affordable Care Act, the health care overhaul that was met with fierce opposition from Republican lawmakers who described it as government overreach. Socialist Party supporters used the term “socialism” on campaign and candidate buttons during the 1900s but Republicans and Democrats did not, said Ted Hake, a campaign button collector who maintains an encyclopedia of more than 15,000 presidential election items in York, Pennsylvania. “I don’t see anybody throwing the word ’socialism, pro or con, on a major party button,” Hake said, after reviewing his collection from 1920 to 1976.

THE FACTS: The photo being shared on social media with an incorrect caption was taken during the filming of “Generation Um,” a movie that starred Reeves. The photo was originally published in 2010 by Splash News, an entertainment news and photography agency, as part of a feature on the movie, which filmed in Manhattan. The photo was part of a series of images taken during filming, Junez Ali, a senior account executive at Splash News, told The Associated Press. In the scene, Reeves steals a video camera from a group of cowboys and then runs away with it. “Generation Um” was released in 2012. The photo has circulated previously on social media with the false caption.