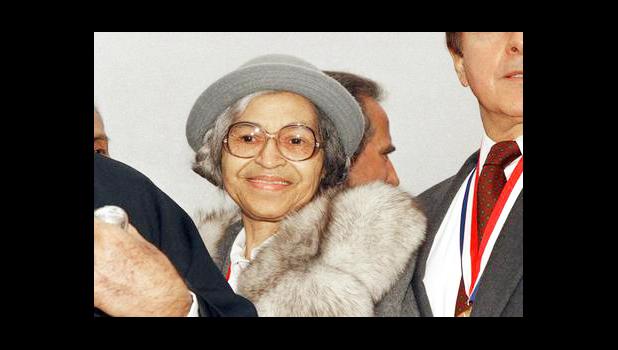 THE FACTS: A hoax story created by ourlandofthefree.com claims Rosa Parks' daughter spoke out in support of President Donald Trump during a speech in Washington, saying her late mother "would have been proud of the President's words." The civil rights icon never had children. The picture of the fictional Muriel Parks-Rosenberg accompanying the story is actually a photo of Democratic Ohio state Sen. Nina Turner.

THE FACTS: A cemetery in the small town of Delaware, Ohio, has no plans to dig up the remains of Civil War soldiers and toss them into a creek, despite a story created by a farce site made to look like a local news outlet. Lee Yoakum, a spokesman for the city, calls the story "the fakest of fake news." DelawareOhioNews.com also posted a story stating Republican Ohio Gov. John Kasich legalized exhumation of Confederate graves, which also isn't true.

NOT REAL: Charles Manson to be released on parole, to (insert city here)

THE FACTS: The notorious mass murderer isn't being released on parole anytime soon, despite various stories circulating online. The stories originated in 2014 with an article by the hoax site Empire News. A site named breakingnews365.net shared similar stories recently claiming Manson was headed to states including Texas and Connecticut. The 82-year-old Manson was denied parole for the 12th time in 2012 and isn't eligible again until 2027.

THE FACTS: YourNewsWire.com and NewsPunch.com, two sites that frequently publish stories based on conspiracy theories, have posted articles claiming the 41-year-old lead singer of Linkin Park was murdered and the media are covering up his cause of death. The sites offer a quote from an unnamed police source and a deleted tweet from Bennington's wife's Twitter account, which had been hacked, as the evidence of a possible homicide. Bennington hanged himself from a bedroom door in his home near Los Angeles last month. The Los Angeles County coroner ruled the death a suicide.

NOT REAL: NBC NEWS: By The End Of 2017 All Americans Will Receive A Microchip Implant!

THE FACTS: NBC never reported such a thing, despite numerous false stories shared online by websites including healthfitpoint.com. The story includes video of a 2007 "NBC Nightly News" report on what life would be like in 2017. NBC made no such claims in the report.