Pea-sized pill delivers insulin shot from inside the stomach 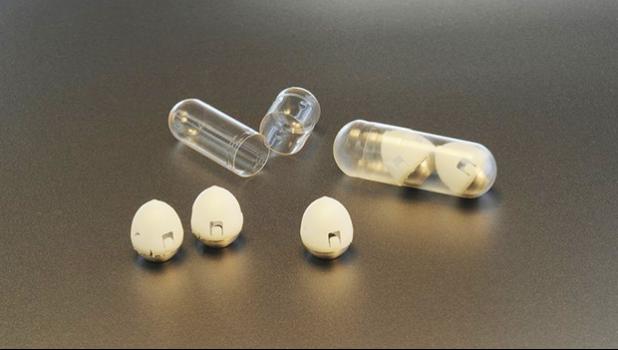 WASHINGTON (AP) — Scientists figured out how to hide a shot inside a pea-sized pill — creating a swallowable gadget, inspired by a tortoise shell, that can inject medicines like insulin from inside the stomach.

Patients usually prefer oral treatment, and comply with it better, but many compounds, including insulin for diabetes, can’t survive the harsh trip through the digestive system.

The new invention, reported Thursday by a Massachusetts Institute of Technology-led research team, has been tested only in animals so far. But if it pans out, it might offer a work-around to make not just insulin but a variety of usually injected medicines a little easier to take.

“It’s like a miniaturized rocket launcher” for insulin, said Willem Mulder of Mount Sinai’s Translational and Molecular Imaging Institute, who wasn’t involved in the new research.

Scientists have spent decades trying to develop oral insulin and replace at least some of the daily shots that many people with diabetes require. Attempts include ways to protect insulin from digestive breakdown and then help it be absorbed through the intestine into the bloodstream. So far none has reached the market, although some closely watched candidates are being tested.

An ingestible injection could bypass the hazards of that journey — letting insulin absorb through the wall of the stomach, said Dr. Giovanni Traverso, a gastroenterologist at Boston’s Brigham & Women’s Hospital and a senior author of the study.

“The way this works is it travels down the esophagus in seconds, it’s in the stomach within a few minutes, and then you get the drug,” said Traverso, who worked with a team from the lab of MIT inventor Robert Langer and insulin maker Novo Nordisk.

The first challenge: How to make sure the device lands where it can poke into the right spot, even if someone’s moving around. Researchers looked to nature for ideas.

A certain tortoise, the leopard tortoise from Africa, can right itself if flipped onto its back thanks to the steep curve of its shell. Researchers crafted a miniature capsule with a similar shape and a weighted bottom, so that once it reaches the stomach it automatically rolls in the right direction to latch on, Traverso explained.

Next the team designed a micro-injector, like a needle only made of dried insulin compressed into a sharp point. To power it, researchers bound a tiny spring to a hardened sugar disk.

Stomach acid gradually dissolves the sugar until the spring pops, shooting the insulin into the stomach wall.

In pigs, the ingestible injection lowered blood sugar to levels comparable to standard shots, according to the study published Thursday in the journal Science.

Once the insulin was absorbed, the capsule, made of stainless steel and a biodegradable material, floated free and was excreted.

“It’s a very clever idea, that is meant to solve a very long-standing problem,” said University of Pittsburgh chemical engineering chairman Steven Little, who also wasn’t part of the research. Because the gadget passes through, “the only thing administered to the body is this little injector.”

One hurdle: It works on an empty stomach, with nothing to get in the way of the device latching on. Traverso said that means it might one day replace morning insulin shots but not post-meal doses.

If poking into the stomach wall sounds worrisome, Traverso said gastroenterologists have long used bigger needles to deliver medicines during certain gastric procedures and their patients fare well. The stomach muscle is thick enough not to worry about a micro-injection piercing all the way through, and the animal studies found no side effects. But Traverso said more research is needed to see how the stomach handles daily micro-injections over many months.

Additional animal studies are under way, and Traverso hopes human testing can begin within three years.