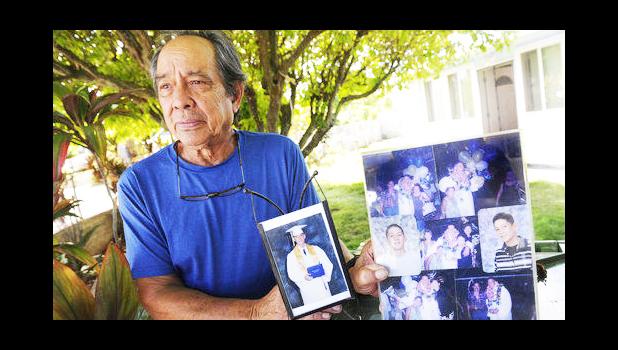 HONOLULU (AP) — After years of red flags and reprimands by the U.S. Army, the FBI took an active-duty soldier into custody on terrorism charges over the weekend. The yearlong federal investigation that led to his arrest involved multiple undercover agents and confidential informants. Sgt. 1st Class Ikaika Kang made an initial appearance Monday in federal court.

Here's a look at a timeline of events that took Kang from his home in Hawaii to wars in the Middle East and eventually on to a federal detention center facing terrorism charges, accused of pleading allegiance to the Islamic State group and wanting to commit a mass shooting:

Kang enlisted in the Army just months after the Sept. 11 attacks.

Kang deployed to Iraq in March

Kang returns from Iraq in February. Over the course of the year, Kang was repeatedly reprimanded for threatening to kill other service members and making pro-Islamic State group arguments while on duty.

Kang's security clearance was revoked because of concerns about the death threats and Islamic State comments.

After completing requirements set forth by the military in response to Kang's actions, his security clearance was reinstated. According to the FBI, a CD with classified documents that was later found in Kang's possession was created June. In July, Kang was deployed to Afghanistan and returned in April 2014.

Kang appeared to start becoming radicalized, and the Army contacted the FBI to begin an investigation.

The FBI searched his belongings while at the training program in Alabama and took data from his laptop and an external hard drive that contained classified military documents. They also found videos and files referring to terrorist groups and violence. An undercover FBI agent posed as a guest lecturer at the training program and was introduced to Kang.

The two spent several days interacting, including going to a mosque to pray together. Kang then told the FBI agent that he wanted to travel to Turkey to visit an Islamic State group consulate, but that he was afraid he would be arrested if did so. The undercover agent told Kang that he thought the Islamic State could use his skills, and Kang said that he wanted to provide training to their fighters.

The FBI agent told Kang that he knew a militant who would be travelling to Hawaii, and could arrange a meeting.

Kang returned to Hawaii. Around the middle of the month, the FBI searched his home in Waipahu and found a CD marked secret that they say contained the same classified documents they found on his hard drives.

Kang reportedly continued making pro-Islamic State statements to other soldiers, including that he would not shoot at fighters if he was deployed to Iraq. He also said he thought the Sept. 11 attacks were an inside job conducted by the United States. Kang received "negative counselling statements" from the Army and was told to stop making such remarks.

Kang told an FBI informant that he had been researching online videos about the most effective and painful torture techniques because he was angry that a civilian had taken away his air traffic control license. The FBI document says that Kang wanted to "tie him down and pour Drano in his eyes." Kang also said the Pulse Nightclub shooter in Orlando "did what he had to do" and that "America is the only terrorist organization in the world." He also said that "Hitler was right" and supported the mass killings of Jews.

The FBI's undercover investigation continued, and they made arrangements for Kang to possibly take part in a training course on the mainland that could help the Islamic State group.

Kang met with undercover agents in a hotel room and transferred military documents, including classified documents originally obtained in 2013, to the agents, who Kang believed would pass them along to the Islamic State. The agents offered Kang the opportunity to take payment for his help, but Kang declined. The agent also told Kang that he could arrange a meeting with an actual Islamic State member, and Kang responded, "Hell yeah."

On July 7, Kang met with the undercover agents at a house in Honolulu, where they introduced him to a man Kang believed to be a member of the Islamic State group. Kang told the men that he would provide training and help them with acquiring drone technology that could help the terrorist group fight U.S. forces. He brought firearms, knives and tactical gear to the house. The agents told Kang that he could come back to the house the next day.

On July 8, Kang was introduced to a man he was told was an Islamic State leader. The men discussed and then purchased a drone that Kang told them they could use to escape battles involving U.S. tanks. Kang then swore a pledge of loyalty to the Islamic State and received a folded Islamic State flag as a gift. He then told the undercover agents that he wanted to kill "a bunch of people," but was urged to wait until the drone was out of the country and they could make a better plan. The men then made training videos for about two hours and watched them together.

Kang was then arrested by an FBI SWAT team without incident. According to court documents, Kang waived his Miranda rights and admitted to his role in the crimes.