US Capitol locked down as Trump supporters clash with police in D.C. 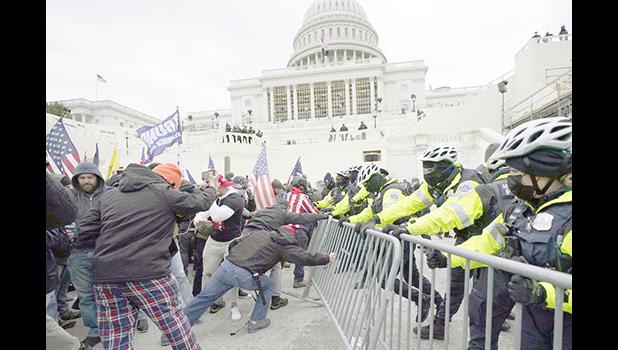 WASHINGTON (AP) — The U.S. Capitol locked down Wednesday with lawmakers inside as violent clashes broke out between supporters of President Donald Trump and police.

An announcement was played inside the Capitol as lawmakers were meeting and expected to vote to affirm Joe Biden’s victory. Due to an “external security threat,” no one could enter or exit the Capitol complex, the recording said.

Both chambers abruptly went into recess.

The skirmishes occurred outside in the very spot where president-elect Biden will be inaugurated in just two weeks.

A suspicious package was also reported in the area, Capitol Police said.

The skirmishes came just shortly after Trump addressed thousands of his supporters, riling up the crowd with his baseless claims of election fraud at a rally near the White House on Wednesday ahead of Congress’ vote.

“We will not let them silence your voices,” Trump told the protesters, who had lined up before sunrise to get a prime position to hear the president.

More details as they become available.

“My father once served as a Capitol police officer, and I know some of the fine current officers. We value their dedicated protective service. They are serving the nation. So, my heart was saddened by the scene at the Capitol today. There’s no place for violent, threatening behavior in our political system. We’ve seen far too many incidents in recent months, and that cannot become the way our nation resolves disputes. Everyone supports the right to peaceful protest, not to dangerous disregard for the common sense police protections at the Capitol.

“I also strongly support Senator Tim Scott’s efforts to establish an election commission to ensure confidence in future elections. I understand the concerns people have, and I urge the majority in Congress to transparently work side by side with Senator Scott’s effort for the unity of the nation. May God bless the United States.”