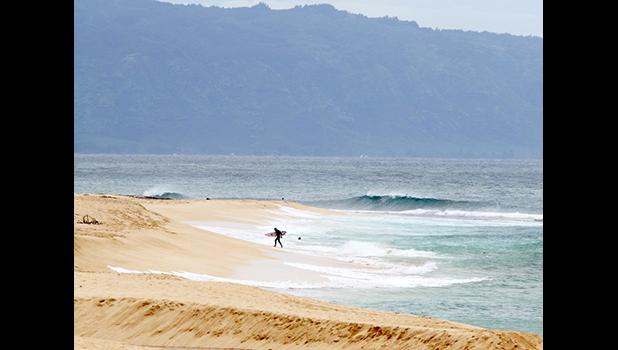 HONOLULU (AP) — A quarantine imposed on travelers arriving to Hawaii discriminates against out-of-state residents, the U.S. Department of Justice said in support of a lawsuit challenging the mandate meant to protect the islands against the spread of the coronavirus.

“This case raises issues of national public importance regarding the interplay between the government’s compelling interest in protecting the public and citizens’ constitutional rights,” the Justice Department said in a “statement of interest.”

It was filed Tuesday in connection with a federal lawsuit by Nevada and California residents who own property in Hawaii and believe the quarantine mandate is unnecessary and unfair.

Hawaii has maintained a relatively low rate of coronavirus infections compared to other parts of the U.S. As of Tuesday, Hawaii reported 819 confirmed cases and 17 deaths.

The quarantine, in place since March, requires arriving visitors and residents to spend 14 days in hotel rooms or residences. Those caught breaking quarantine for any reason other than medical emergencies face up to a year in jail and $5,000 fines. Some tourists and residents have been arrested.

Gov. David Ige, a Democrat, extended the quarantine through the end of July. But he recently lifted a similar requirement for interisland travel, which the Justice Department took issue with.

“To be clear, the United States appreciates that Hawaii, unlike many other States, is generally reached by airplane, which raises particular public-health concerns,” the Justice Department’s statement said. “But that alone cannot end the analysis, especially as the Governor does not subject those who travel by air between islands (as opposed to between States) to the self-quarantine mandate.”

One of the lawsuit’s plaintiffs is Russell Hirsch, a Nevada resident who owns a house on Oahu and a farm on the Big Island. He needs to travel to Hawaii to maintain his properties and “he wants to celebrate his daughter’s recent graduation in the place where she grew up,” the Department of Justice said.

Another plaintiff is a Hawaii resident who argued the quarantine makes it impossible to visit her daughter and 90-year-old grandmother on the U.S. mainland.

The Justice Department’s arguments and the lawsuit have no merit, the Hawaii attorney general’s office said.

It’s reasonable to protect the public during a pandemic, but state officials need to be bound by constitutional safeguards, “such as the right of Hawaii residents and persons who hail from other states to travel freely within this great country,” said Kenji Price, the U.S. Attorney for the District of Hawaii.

The Justice Department’s statement suggested Hawaii has been slow to adopt less restrictive plans similar to Alaska, where travelers have alternatives to quarantine if they test negative for the virus.

Ige on Wednesday announced a similar plan to Alaska’s involving pre-testing travelers as an alternative to quarantine starting August 1.

The timing of the announcement wasn’t because of the Justice Department’s court filing, Ige said, noting that the pre-testing plans may impact the legal case.

The federal judge presiding over the lawsuit gave the Justice Department until Wednesday afternoon to further explain why it should be involved in the lawsuit. A hearing for the lawsuit had been scheduled for July 2.

“The Federal Government holds the discretion to weigh in on controversies when it determines that its interests are implicated,” the Justice Department said Wednesday, adding that it is doing so to “ensure that civil liberties are protected during the COVID-19 pandemic.”

The Hawaii attorney general’s office is asking that the lawsuit be consolidated with another similar case filed by a group of Kauai and Big Island residents.