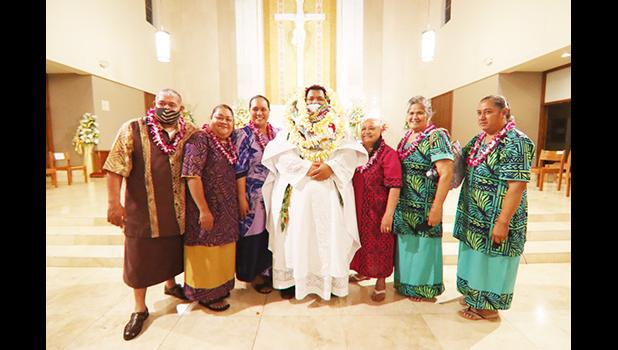 Honolulu, HAWAII — In a celebration where exuberance challenged the pandemic’s caution to keep one’s distance, Bishop Larry Silva ordained to the priesthood Ese’ese Filipo “Ace” Tui May 21 at the Co-Cathedral of St. Theresa in Honolulu.

The two-hour, 15-minute liturgy joined the ancient rituals conferring the “sacred order of the presbyterate” by the “imposition of hands and the invocation of the Holy Spirit” with the joy and enthusiasm of Hawaii’s vibrant Samoan Catholic community.

Bishop Silva in his homily drew parallels between this ordination and that of Hawaii’s most celebrated priest, noting that the day was the anniversary of St. Damien’s ordination in 1864. He also said that Father Tui’s first priestly assignment will be at St. Anthony Church in Wailuku, the place where the saint received his life-changing call to go to Kalaupapa.

“May you be a priest after the heart of St. Damien,” the bishop said, addressing Deacon Tui directly.

Taking the theme of “consecration,” Bishop Silva described the future life of the new priest.

“At your first Mass at Our Lady of Perpetual Help Church you will be able to do what you have never been able to do before — consecrate the bread and wine into the Body and Blood of Jesus,” an act that will be repeated “thousands of times” over his lifetime, he said.

“May each time fill you with awe,” the bishop said.

“You will spend your whole life consecrating people in a thousand different ways,” he said, teaching them, reconciling them in the sacrament of penance, witnessing marriages and following couples “in the highs and lows of their lives,” and anointing the sick.

The bishop said Father Tui would also join his brother priests in a fraternity where they would “grow together in holiness.”

But he said his greatest gift would be “consecrating the bread of life and the chalice of salvation.”

The ordination celebration started at 6 p.m. with a prelude hymn in Samoan, followed by a “fa’afeiloaiga,” a traditional Samoan greeting repeated in English. “This is the day the Lord has made, let us rejoice and be glad in it,” the greeter said, quoting the psalm.

Members of the congregation were masked and assigned to social distanced spots in the pews.

The power of the choir, members of the Samoan choirs of Our Lady of Perpetual Help Church in Ewa Beach and Sacred Heart Church in Waianae, transformed the liturgy into one long melodic prayer with its transcendent harmonies.

The ordination rite itself came after the Scripture readings and the bishop’s homily. The candidate was formally presented to the bishop, who responded, “Relying on the help of the Lord God and our Savior Jesus Christ, we choose Ese’ese, our brother, for the Order of the Priesthood.”

The congregation affirmed that statement with a loud “Thanks be to God” accompanied by long applause and a few loud hoots.

Standing before the bishop, deacon Tui expressed his resolve to fulfill five responsibilities of the priesthood raised by Bishop Silva, each with a firm, “I do.” He then pledged his obedience to the bishop.

The candidate then lay prostrate face down before the altar on a blanket of tapa while the long “Litany of Supplication,” also known as the “Litany of the Saints,” was sung.

The actual moment of ordination— the silent laying on of hands by Bishop Silva — followed shortly after 7 p.m. All 23 priests in the sanctuary then lined up to also press their hands on their brother priest’s head.

The ordination rite continued with Father Tui being vested in the priest’s stole and chasuble, and — only in Hawaii — a lei, followed by the anointing of his hands by the bishop. In a nod to Hawaii’s first priests, the anointing oil, sacred chrism, was held in a calabash made from the wood of Hawaii’s first kiawe tree planted by the first Catholic missionaries to the islands.

The rite concluded with Father Tui exchanging the “kiss of peace” with the bishop and priests, most of whom offered a slight bow and a pandemic fist bump, though a few gave him a full over-the-shoulder embrace.

After Communion, Father Tui gave his first priestly blessing to Bishop Silva, and his second to Christina Tui, the priest’s aunt, described by the newly ordained as his “hanai” (adopted) mother, who later said she was “filled with happiness.”

In concluding remarks, Father Tui thanked the bishop, other priests, friends, classmates and family. He made a special mention of his father who died 20 years ago, and his mother who was prevented from attending the ordination because of the coronavirus “lockdown” in American Samoa.

Father Tui was born and raised in Faga’alu, American Samoa, the oldest son of Siamani Kelemete Tui Faatiliga, who is deceased, and Miriama Tasi Toleafoa Aumaivao Tui. He has three younger brothers, Sanele, Valoaga and Siamani Jr., and one younger sister Tilomai.

He was tagged with the nickname “Ace” by an older cousin who thought his given name was too long.