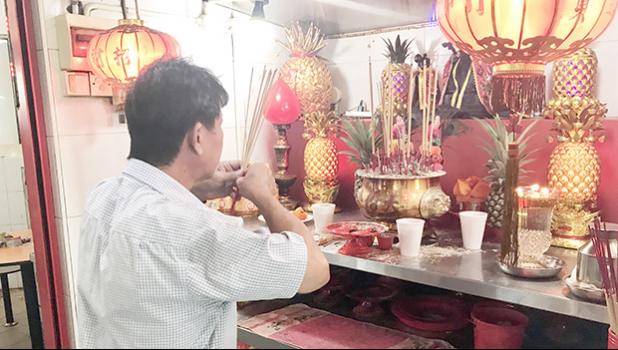 A man prays at an area in the Tekka Food Court in Singapore.  Photo by Barry Markowitz

Maybe the gentleman above is praying for AmSam's spiritual and financial well being as the Territory's Flag Day Celebrations take place.  Maybe he is asking for help from above so Cool Stuff doesn't eat all the Halal Mitton Steak, Red Bean pau (think keke pua'a) coconut buns (think Samoa German buns), sweet coffee, and coffee cake.

Ok, the truth... he is asking for a Territorial Bank Routing Number so he can pay for a Samoa News online subscription

Your other team, the USA Eagles, is loaded with heaps of Pacific Island heritage players and wowing the crowds with potent displays in Vancouver and last weeks Hong Kong 7s (you saw Joe Hamby's action HK 7s images online a few days ago as proof).

I am excited that Tony's, Ese’s and Leilua Aiono Frost's photos are putting me right in the Flag Day and fautasi mix, like Cool Stuff was actually there.

So time for Cool Stuff news scoops we maybe ought to share with our editors...but you folks are dedicated Coolio's so you get early tips:

a) In 27 days or less we will give you thumbs up/thumbs down on some exciting aviation news that could positively affect you.  It is before the powers that be...we are sworn to secrecy on the threat of losing my faleaiga Pinati VIP seats.

b) Stuff happening on the breadfruit flour front in about 30 days.  Heaps of intrigue happening now.  Cool Stuff is a huge fan of Alex Jennings' innovations and excited for our Samoa News team coverage highlighting his ongoing achievements.  We know Alex will be regarded as a Worldwide Breadfruit Territorial  leader as that industry evolves.  Keep tuned in

As the Territory gives thanks for its US affiliation, it might also give thanks that the Committee didn't invite the Singapore local Dragon Boat teams...they would honestly be a hefty challenge for Aeto and other Samoa fautasi traditional past winners... Cool Stuff watches their dedicated Dragon Boat workouts on the Kallang River daily, adjacent to the National Stadium (where the Singapore 7s is held).

If the Governor's Staff worked it out with the Fautasi Committee and Singapore... the Territory could see a positive supplement in sports tourism as the crews would be supported by family, friends and Singapore's awesome fan base.

Singapore has much to share with the Samoas.  The simple Samoa lime could help replace lost cannery jobs... if the Territory watched and followed Singapore's lead.

Congrats American Samoa and bless your families and leaders.