Island of the Giants: "Big Momma” is Not Alone 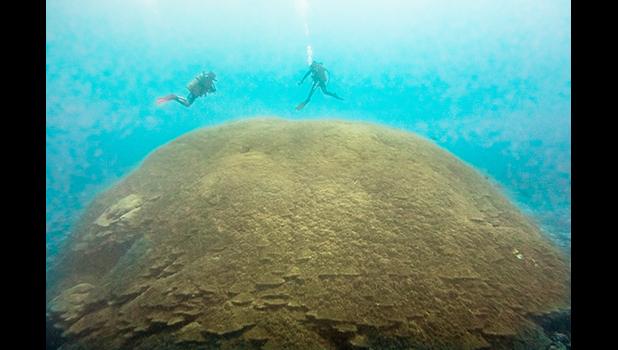 “…everything is bigger in Samoa”
By
Nerelle Que, NMSAS media coordinator

There’s a saying that goes “everything is bigger in Samoa.” This may be a sweeping statement, but when it comes to corals, it’s true that the waters surrounding Ta’u island in American Samoa are home to some of the largest known corals in the world.

While Big Momma can be found in the Ta’u unit of National Marine Sanctuary of American Samoa, there is an even larger Porites bommie located within the National Park of American Samoa boundaries, on the east side of the island. The newly documented Porites bommie measures 26 feet tall, 73 feet in diameter, and 226 feet in circumference. Porites are slow growing, so its colossal size indicates it must be very old. Scientists estimate the coral is between 420 and 652 years old!

When the two scientists started their descent to do their assessment dive, Dr. Sudek noticed something large in the distance. She signaled to Dr. Vargas-Angel whose eyes bulged when he saw what she was pointing at. They decided to delay the start of their survey and excitedly swam towards the giant. “When I got close, I couldn’t believe my eyes. In front of us was a coral so big it dwarfed anything I had ever seen throughout my career, including the Big Momma coral on the other side of the island,” said Dr. Sudek.

The scientists didn’t have the necessary equipment to immediately measure the bommie, but they returned to the ship and enthusiastically discussed their finding and noted the coordinates so they and other scientists could return to further study this unique coral.

Surrounded by nearshore coral reefs, American Samoa is a living laboratory for scientists who study the reefs to gain a better understanding of how to protect them. The long lifespan of these corals suggests that they are either resilient to environmental impacts like coral bleaching or there are special environmental characteristics in Ta’u that let these giants thrive. Scientists believe that further studying these corals might reveal the secrets of how they have survived hundreds of years and multiple heatwaves and coral bleaching events over the past decade.

One theory is that the massive Porites in Ta’u have unique genetic traits that improve their ability to resist or recover from major impacts such as higher than normal water temperatures, disease, and predation. These genetic traits may be transferred to offspring and could help corals survive in a changing climate. The bigger the coral, the more gametes it produces, so these large Porites are likely major contributors to the Porites seed population in this area, and therefore very important to the environment. This would lend another meaning to the saying “bigger is better” — the bigger the coral, the more genetically fit larvae it produces.

Another theory is that environmental conditions in Ta’u may be responsible for the survival of these corals across centuries. The calcium carbonate skeletons beneath the living veneer of coral tissue provide a glimpse of past conditions in Ta’u. Porites create new growth bands as they build their skeletons. These are similar to the growth rings of trees and can tell us how old the coral is and what conditions were like that year. Scientists carefully removed a skeletal core from Big Momma in 2011, and determined the coral is at least 500 years old.

Local scientists are planning to conduct follow up studies to learn more about these corals and the environmental conditions in Ta’u in hopes of unlocking the secrets of long term coral reef resilience. These reefs are not immune to climate change, so scientists will continue to monitor these giant corals and the coral reefs around them in the coming years.

Visitors to American Samoa may charter a commercial dive vessel to snorkel or scuba dive in Ta’u to get the full experience. As a remote island, visitors should be aware that dive charters from the main island of Tutuila have a transit time of about four to six hours to get to Ta’u. Visitors can dive on the west coast of Ta’u to find Big Momma in National Marine Sanctuary of American Samoa and then take a boat ride to the east coast of Ta’u to dive the newly documented massive Porites in the National Park of American Samoa.

National Marine Sanctuary of American Samoa is now strongly recommending that visitors clean and disinfect all snorkel and dive equipment before getting in the water. This is to prevent the possible spread of stony coral tissue loss disease, which has devastated other reef communities like those in Florida Keys National Marine Sanctuary and throughout the Caribbean.

You can also get a glimpse of these giants from the comfort of your home with this virtual dive of Big Momma.