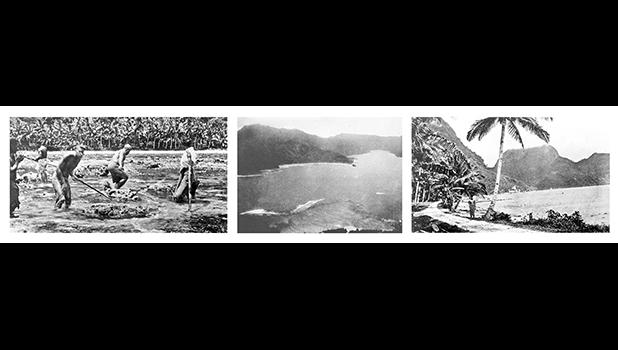 Pago Pago, AMERICAN SAMOA — Conservation scientists have long taken advantage of historical photographs to assess how places have changed over time, and the degree of human and environmental impact they face. And this is the case with black and white photographs taken in 1917 of the reefs, shore and villages surrounding Pago Pago Harbor. Remarkably, a robust quantitative survey came with them, for they were taken by pioneering marine biologist and zoologist Alfred Mayor (1868 – 1922).

The early photographs and transect survey of the coral communities at Aua reef inspired a senior marine scientist with The Nature Conservancy's Global Marine Team and Indo-Pacific Division — Dr. Alison Green and colleagues to repeat the survey on the same reef over decades.

Green got the idea to resurvey the Aua transect in 1995 when she was working for the American Samoa Department of Marine and Wildlife Resources (DMWR) surveying reefs throughout the Samoan Archipelago. She asked coral biologist Charles Birkeland (then at the University of Guam) to help. The scientists were conducting a survey together in Fagatele Bay National Marine Sanctuary at the time.

The Aua coral surveys encompass more than a century — from 1917 to 2019, with 11 surveys conducted overall, making it the longest active quantitative coral reef survey in the world.

The resulting paper by Green, lead author Birkeland and contributing scientists, documents the scope of their findings, with a focus on areas of lowest and highest resilience across Aua and the neighboring coral reefs of the American Samoan islands amidst high stress conditions through time.

With coral reefs worldwide declining due to warming sea temperatures and related climate change stressors, long-term monitoring of reef ecosystems reveals patterns and dynamics that are useful, not only for research, but for reef management and protection.

Now a retired professor from the University of Hawaii at Manoa, Birkeland is a coral biologist with extensive expertise in coral reef ecosystems. He studies the dynamics of reef systems through time.

The 1995 survey found that approximately 95% of the reefs in the inner Pago Pago Harbor, including Aua, had been severely degraded, primarily from dredging and filling operations, and wastewater pollution from two tuna canneries.

Other natural and anthropogenic disturbances contributed, including cyclones, bleaching events, extreme low tides and a tsunami. Two prior surveys done in the 1970s disclosed the extent of damage in Pago Pago Harbor on the reef at Aua, and served as a comparative framework for Green and Birkeland’s subsequent surveys.

“Mayor was ahead of his time. Most quantitative monitoring of coral reefs worldwide didn’t start until the 1980s,” Green said. “His research at Aua was a significant achievement for the science of his era, and still serves as an inspiration for future generations of scientists. Our survey was made possible by his work there.”

Long-term monitoring brings challenges of time, people, resources and funding, as these ingredients are not always consistent or available. Green and Birkeland persevered.

With support from DMWR and the National Marine Sanctuary Program, Green and Birkeland first resurveyed Aua in 1995. Thus began a long-term collaboration, with subsequent surveys supported by the American Samoa Coral Reef Advisory Group (CRAG), and culminating in the current paper and related projects. From the start, the Aua community supported the scientific work on the reef in front of their village, beginning with Mayor in the early 1900s and continuing with Green, Birkeland and colleagues into the 21st century.

While the overall coral cover had declined since Alfred Mayor’s original survey was completed in 1917, much of the coral loss was attributed to the blasting of large portions of Pago Pago harbor for shipping channels and dredge and fill operations which is now prohibited by increased environmental regulations.

In addition, new laws were put in place in the 1990’s requiring the tuna canneries to pipe discharge further from the mouth of the harbor. Once this regulation was implemented the effluent from the canneries dissipated, the harm to the reefs was substantially minimized, and the corals had the opportunity to rebound.

Green and Birkeland observed that at least one section of corals at Aua reef was thriving and resilient.

In contrast to the inner and middle reef flat, the latest survey (2019) observes the outer crest to be remarkably healthy and resilient. Despite its location in the middle harbor, it hosts an even greater abundance of corals (Acropora nana) than the “pristine” community of primarily Acropora corals observed by Mayor in 1917. Like the other reef sections, the outer crest has been exposed to similar disturbances through the decades, yet here, coral recruitment and growth was robust.

The scientists relate this success to the presence of an array of binding crustose coralline algae (CCA) – red algae that produce and shed carbonate skeletons of high-magnesium calcite that rapidly cover and bind to the loose rubble, creating a solid foundation for coral larvae to settle and grow the reef. This, in turn, attracts reef fishes and invertebrates to the habitat.

The surveys determined that 94% of successful recruits to the reef crest and reefs in American Samoa, in general, were found on CCA, and that these algae are acknowledged as being one of the main constructors of reefs, contributing to both recovery and recruitment.

In summarizing their findings, Birkeland said that how coral reefs recover from disturbances depends on many “reef resilience” factors. He related the presence of CCA to the wave action on the reef crest, which helps them thrive.