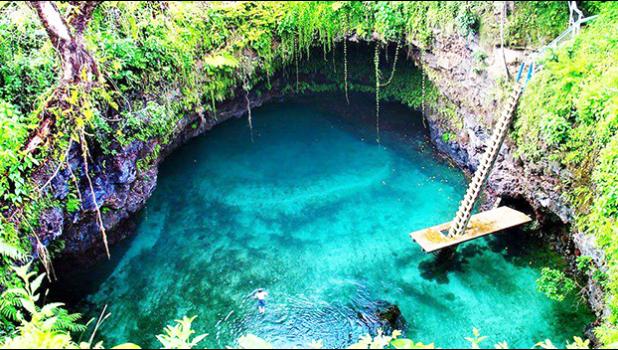 Less than four hours from Auckland and about five hours from Sydney and Brisbane, and less than an hour from American Samoa, Samoa is renowned for its natural beauty, genuine hospitality and stunning adventures, the STA says.

For your ideal trip itinerary, Samoa offers 10 things to do, with “a mix of pure relaxation, outdoor adventure, and traditional culture … We've built the ultimate itinerary hit list which includes all the top (and most unique) Samoa experiences” to help you plan your visit, according to STA.

1. “Being part of a FIAFIA NIGHT celebration is a great way to experience Samoa’s colorful ancient culture through traditional dance – including the not-to-be-missed fire knife dance – music, and a buffet of delicious umu-cooked food.

“Popular with visitors and a true reflection of traditional culture in Samoa, most resorts and hotels have their own weekly fiafia nights, as do tour companies and cultural centers such as The Samoa Cultural Village in Apia.”

2. Samoa also offers the most gorgeous Pacific coastlines for SNORKELING.

“Some of the most stunning snorkeling spots are Lalomanu Beach, Matereva Beach, the Aleipata coastline, and Falealupo on Savai'i. Or if you’re closer to Samoa’s capital Apia, at high tide you can take a dip in the Palolo Deep Marine Reserve.

“What other capital city in the world has a coral reef right on its doorstep?”

3.  Also be wowed by the SALEAULA LAVA FIELDS.

“Savai’i's Saleaula lava fields were formed when one of the island’s volcanoes, Mt Matavanu,  erupted and destroyed five entire villages (thankfully not killing any locals).

“What remains is a fascinating shell of the village church with the eruption’s volcanic flow eerily set in place. You can see exactly where the lava flowed past, and through, including interesting imprints of trees and other remnants of village life.”

4.  There are also the ALOFA’AGA BLOWHOLES, says the STA.

“These spectacular blowholes, formed in the rocky coastline of Taga on Savai’i, force thousands of litres of seawater skyward making for a spectacular sight. Local villagers add to the drama by throwing coconuts into the blowholes to watch them shoot out metres into the air, showing the powerful force of nature.

5.  “Because of its mountainous landscape, Samoa has plenty of WATERFALLS, particularly along the southern coasts of Upolu and Savai’i.”

Make time for a tour of Samoa’s waterfalls is a great way to discover some of Samoa’s most stunning landscapes while giving you the opportunity to cool off from the heat of the day.

“If you just get to one waterfall, Fuipisia at the eastern end of Upolu” — it is one of the most impressive to see.

“And for something more off-the-beaten-path, head to the Falese’ela River Walk for an exhilarating river trek in the Samoa wilderness.”

6.  The LOCAL MARKETS have so much to offer too, says STA.

“There are a few more truly local experiences than visiting a market. Samoa’s famous fish market in Apia, in particular, is worth a look.

“The Fugalei fresh produce market is the place to shop like a local and pickup delicious fruit and other market snacks.

“And don’t miss the Savalalo flea market for souvenirs and gifts to take home.

“Make the effort to visit food markets early on a Sunday morning as this is when Samoans turn out in force to prepare for their weekly post-church feast.”

At the SATOALEPAI TURTLE SANCTUARY, juvenile turtles are raised from infancy by villagers, before they're released into the wild where they reach up to 180 kilograms.

8. The famous ‘TO SUA’ OCEAN TRENCH is as stunning in real life as it appears on Instagram.

“Its azure-blue waters are accessible 30 metres down a ladder to a wooden platform that opens into the massive waterhole, fed by water flowing through lava tubes from the ocean.

“The hole is in fact two holes that are joined by a cave. The brave can swim under the tubes into caves, and out to the lagoon.”

9.   Also take up the challenge of taking the PUBLIC BUS on holidays.

“When you see one of the colorful vehicles for the first time, you’ll know exactly why.

“If you do manage to spot a bus passing by, simply wave it down. And most buses have booming music to add to the experience.

“Catching one may be a bit tricky if you’re on a schedule because the buses are certainly not always on time. It’s not unheard of for buses to stop at supermarkets and wait while locals do their shopping.”

10. As a Christian country, SAMOAN CHURCHES ON SUNDAYS are bound to impress.

“Whatever your religious beliefs, listening to the enchanting sounds of a Samoan church choir is bound to impress and inspire your senses. Most people faithfully attend Sunday services.

“Visitors are welcome to join church services. You might also encounter the choir singing at a religious event on a different day of the week, or even practicing in one of the many churches through the week.”