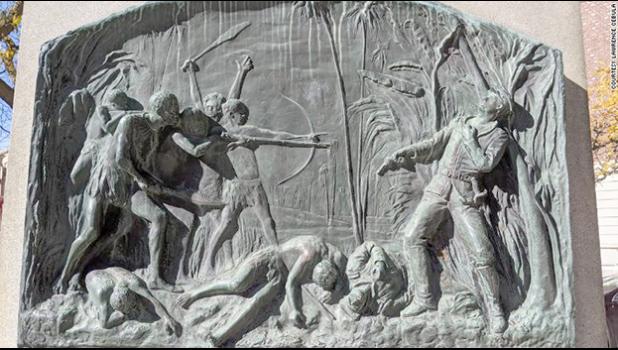 Most of the city's residents have no idea who Monaghan was. But for many Pacific Islanders in the area, his legacy is one of violence, colonialism and racism -- and they want the statue to come down.
Pacific Islanders and their allies marched through downtown Spokane this past weekend to amplify calls to remove the monument -- a demand that community members have made for years and have since renewed this past June, according to Joseph Seia, founder and executive director of the Pacific Islander Community Association of Washington.
Activists have also started a petition to take down the memorial.

"There's no honor in lifting up somebody that killed our ancestors," Seia said.

Monaghan is believed to be the first Washington resident to attend the United States Naval Academy and served in the Navy at the height of US imperialism in the 1890s, historian Lawrence Cebula said. In 1899, the Navy attacked Samoa in an attempt to impose US rule over the islands. The USS Philadelphia -- on which Monaghan served -- shelled native villages, while officers went ashore to burn survivors, Cebula said. Their actions targeted and killed civilians, including women and children.

The statue of Monaghan in Spokane was erected in 1906 in a ceremony that included numerous racial slurs against the Samoan people, according to Cebula. Those slurs and offensive characterizations persist to this day -- a plaque at the base of the monument refers to the Samoan forces as the "savage foe" and inaccurately depicts them with bows and arrows.

BACKGROUND
Other historical accounts of the Samoa civil war of 1899 are not in total agreement with the account reported by CNN.

The Navel History and Heritage Command reports it this way:

During a combined reconnaissance of Americans, British, and Samoans near Apia on 1 April 1899, the American detachment, from Philadelphia, under the command of Lt. Philip V. Lansdale, came under fire from hostile rebel Samoans under Chief Mataafa "which it was impossible to withstand”.

During the ensuing retreat, Lansdale fell, wounded, as he attempted to cover the retreat with a machine gun. Monaghan seized a rifle "from a disabled man [to make] a brave defense." The Samoans rushed them. Ensign Monaghan, one observer later wrote, "stood steadfast by his wounded superior and friend; one rifle against many, one brave man against a score of savages. He knew he was doomed. He could not yield. He died in heroic performance of duty..."

The remains of Ensign Monaghan were brought back to the United States on Philadelphia and interred in Spokane, where every honor was paid his memory. On 25 October 1906, a bronze statue was unveiled in Spokane, by his sister, Agnes, which was given by the citizens of the state of Washington.