American Samoa’s borders remain closed, but there could be exceptions 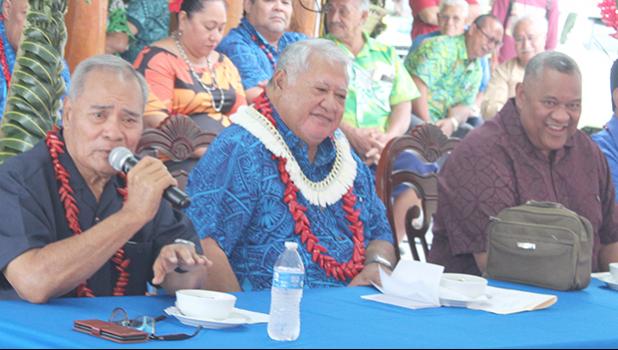 Such as urgent matters impacting the lives of people in Samoa
By
Fili Sagapolutele
fili@samoanews.com

Under the extended declaration, all inter Samoa flights are suspended; however, this restriction will continually be reviewed depending on the COVID-19 status of the two Samoas — with both having no confirmed cases.

Lolo told the task force meeting that American Samoa’s borders remain closed, but there are times that the territory can open up for urgent matters, such as matters impacting the lives of people in Samoa. For example two weeks ago a vessel was allowed to deliver needed tanks of oxygen for Samoa’s national hospital.

Lolo said these matters are such that both sides can help each other, as the Samoa Prime Minister has assisted American Samoa with an airplane — referring to the Samoa Airways plane based at Pago Pago International Airport.

“These issues should not impact or change current policies on border closures,” said Lolo who pointed out that American Samoa isn’t following Samoa’s plans for reopening its borders.

American Samoa’s “determination” to keep its borders closed is a local decision, he said.

He says that there were some people in Apia who requested to return on the flight, which took the engineer to Samoa. And his response was that no passengers or cargo are allowed, and the only passenger would be the engineer sent to Apia.

Tuilaepa is quoted last week in an Apia news outlet saying that there will be a weekly Samoa Airways flight between the two Samoas, with American Samoa’s agreement.

Under the Fourth Amended Declaration, issued last Friday, the governor declared that the territory remains under Code-Blue threat level, but “will change immediately when we have a confirmed COVID-19 case.”

The governor acknowledged that while American Samoa finally has the ability to conduct tests on island with the acquisition of the Abbott testing machine and the GeneXpert machine, the total number of test kits on hand — 1,283 at the time — “is grossly insufficient to support our testing plan targeting the testing of first responders, systematic individuals, vulnerable population, and then asymptomatic persons, to yield confidence in the effectiveness of our protection and mitigation strategies.”

“Our healthcare system is still not equipped to respond to a major outbreak in spite of the purchase of additional equipment and temporary overflow facilities,” according to the amended declaration which has several new provisions.

Among them, one deals with incoming cargo vessels. It states that “to protect our supply lines, sustain our food security and to support the production capacity of our cannery, cargo and fishing vessels are allowed to enter our seaport with full compliance” with the following advisories.

For example, all Stevedoring loading and unloading personnel must receive a medical screening by Seaport Medical Officer at the wharf prior to boarding any vessel. Personnel must wear masks throughout the unloading operations.

Furthermore, all Shipping agents MUST provide specific vessel documents at least 72 hours prior to vessels entering the port, per International Health Regulation requirements: Maritime Declaration of Heath; Vaccination List — including Yellow Fever and MMR; Vessel Particulars; Crew List (date of embarkation of each crew member); official letter from Captain if all crew are well and asymptomatic for COVID-19; Port of Call/Voyage memo for the last 30-days; cargo manifest (e.g. containers from Apia); number of containers discharging/loading in Pago Pago; crew members are not authorized to disembark from any vessel.

The extended declaration also made clear that:

•     the remains of deceased persons shall not be transported as cargo to American Samoa without the express approval of the governor and the coronavirus task force. Failure to seek approval prior to shipment will result in the prosecution of the shipping agency and/ or the person responsible for the shipment.

•     price gouging is prohibited during this declaration.

•     While visitation to the correctional facility is closed, visitation by parents/l egal guardians of individuals housed at the Juvenile Detention Center is allowed, with social distancing exercised and monitored by administrators of the facility.

While operating at Code Blue, “it will change immediately when we have a confirmed case,” the governor said.