CCCAS leadership to mark Easter with special day of prayer 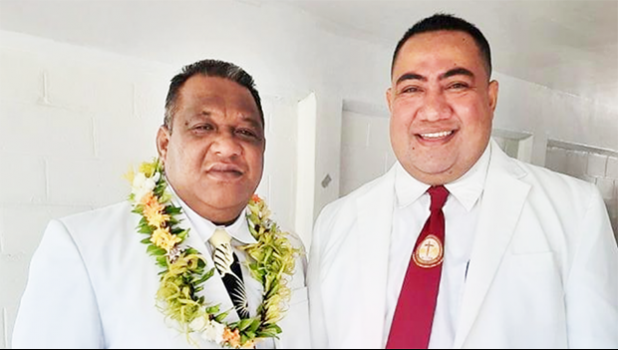 Apia, SAMOA — Leaders of the Congregational Christian Church of American Samoa (C.C.C.A.S.) have called a special day of prayer that will coincide with Easter Sunday, April 17, 2022.

The C.C.C.A.S. numbers 50,000 plus members in 113 congregations, located in American Samoa, the United States of America, New Zealand and Australia.

“This particular day of prayer for American Samoa that the C.C.C.A.S. has announced for Easter Sunday is in response to Governor Lemanu's request during his public address on April 11,” General Secretary Rev. Falealii said.

The call for prayer has gone out to all C.C.C.A.S. congregations, he noted.

“Yes, the call for prayer has gone out to all of our congregations – through email and phone, and through the website and Facebook page,” Rev. Falealii said.

The American Samoa Government has declared two holidays around the Easter weekend – the Good Friday holiday on 15 April and Flag Day on Monday, 18 April. All government offices are closed on both holidays.

“Good Friday is a time to commemorate the ultimate sacrifice of our Lord Jesus Christ. As we reflect upon the Passion of Christ, let us each take a moment to be grateful for the Lord’s continued blessings and protection over our territory,” Gov. Lemanu said in a statement dated 11 April, 2022.

The Easter Sunday day of prayer falls on the Territory’s Flag Day that is celebrated each year on April 17. The government will officially observe Flag Day on Monday, April 18, 2022, according to a separate April 11 statement from the Office of the Governor.

“I encourage you to take time this weekend to reflect and celebrate our union with the United States of America,” the governor said.

American Samoa’s latest tally shows a total of 20 deaths linked to the COVID-19 virus, according to health officials. The total number of COVID-19 cases was at 5,564.

Rev. Falealii said Gov. Lemanu requested early this month for all Church leaders in American Samoa to pray for American Samoa this coming Easter Sunday due to the ongoing COVID-19 pandemic.

“We should pray for both Samoas, and I'm sure Samoa is praying for American Samoa as well,” the C.C.C.A.S. General Secretary said.

“Yes of course we should pray for both Samoas.”

State of Emergency orders have restricted Sunday services in neighboring independent Samoa to 30 people. Some Churches have been suspended Sunday gatherings altogether.

The Government of Samoa reported a total of 10 fatalities and 5,000 cases in it’s latest report. (See story elsewhere in this issue.)

The C.C.C.A.S. special day of prayer on Easter Sunday was announced in a statement published Wednesday, April 13 on Facebook by C.C.C.A.S. General Secretary Rev. Falealii.

Leaders call on members to pray for all who are battling the virus, for the families who have lost loved ones to COVID-19, for the government and all frontliners who are facing the virus head on in the health sector.

“Pray for the whole nation; that everyone may have patience and the spirit to work together and adhere to the safety precautions,” reads the Samoan language statement from C.C.C.A.S. leaders.

Sunday church services have been suspended and leaders of congregations have been broadcasting Sunday services on the internet. Members are encouraged to continue with worship and prayer at home with their families.

Some Elder leaders of the C.C.C.A.S. and ministers, as well as many members, were infected by COVID-19, Rev. Falealii said.

“To my understanding, they have all recovered,” he added.

Easter is a symbol of hope, the Rev. Falealii told Samoa News.

“Easter symbolizes hope, and as we celebrate Easter every year it reminds us that there is always hope.  And in a world where all hope seems lost, this is a message that we need to be reminded of,” the C.C.C.A.S. General Secretary said.

“The risen Christ and the empty tomb that was discovered on Easter morning reminds of this hope.  As both Samoa's struggle, and will continue to struggle with COVID-19, Easter reminds that there is always hope, and how hope should be placed in God, who will deliver us from this pandemic.”