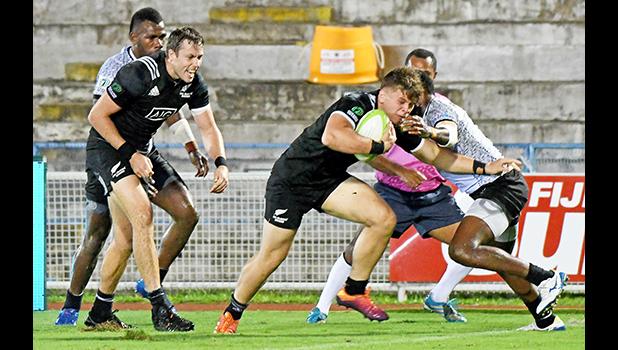 Noteworthy (sad for Cool Stuff) was Australia qualifying for the never happened now delayed 2020 Tokyo Olympics over Manu Samoa in the waning minutes.  A Japan corporate team also beating the "invitational" All Black 7s is probably now forgotten since we were remote to most of the rugby universe.

The Oceania 7s most long term impact might be the "birth" of NZ All Black, Niko Jones, who I shall dub "Baby Iceman", but predict soon to be "Iceman 2.0"

Cool Stuff was honored to capture Niko's All Blacks debut as he is a quality young man that seized the opportunity and proved deserved.

The creation of this photo was almost spiritual in inception.

Firstly it was pouring rain, which was solved by my fa'a Savaii little self invented faleo'o.  Even if your camera is waterproof, your lens becomes rain streaked ineffective if you don't create a moving operational roof.  Even Sir Michael gave my little fale a thumbs up.

Despite the funky electronic meltdown I shot Baby Iceman's first ever historic All Black Try manually, panning towards the try line, all along praying mentally in Hebrew that I would get one worthy image.  Shalom uces, we & Niko both scored.

Thirdly, at the HSBC LA 7s this year I spoke on-field with the current All Black great Tim Mikkelson.  Cool Stuff told Mikkelson that any time Niko "Baby Iceman" is on the field with him, he is officially "Uncle Tim Mikkelson".

Look how proud "Uncle Tim" is cheering on Niko to score that first ever All Black Try.

Cool Stuff is sure only Malina, Grandpa & Grandma Forsgren, and Sir Michael could be prouder. Expect plentee more golden moments for this humble, dedicated young man.