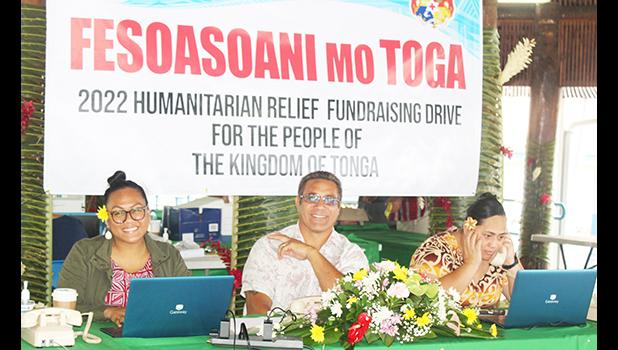 Pago Pago, AMERICAN SAMOA — More then $53,000 was raised on day one, Wednesday, for the 2022 Humanitarian Relief Fundraising drive for Tonga — which is spearheaded by ASG. Government personnel returned yesterday to the Fale Samoa at Suigaula o le Atuvasa Park in Utulei for day two of the fundraising with ASG personnel — seen in this Samoa News photo yesterday morning — manning the Relief Drive Call Center Hotline 633-3333.

As the event continues at the Fale Samoa, concerns were raised after yesterday’s Senate session, over the Administration’s move to not invite the Legislative branch to the fund-raising launch on Wednesday.

During a special meeting after the session, Sen. Magalei Logovi’i raised consternation that lawmakers were not invited to this event or involved in it, which is considered a government event and the Fono is part of ASG.

Others senators agreed with Magalei and also spoke about the issue reiterating their concerns.

Tomorrow, Jan. 29 and on Feb. 5, fourteen drop off locations will be activated, where the general public may drop off monetary donations and non-perishable items (water and canned goods), according to the Governor’s Office.

Online donations can be made by scanning the QR Code. For more information go to online link: [https://www.americansamoa.gov/tongarelief].