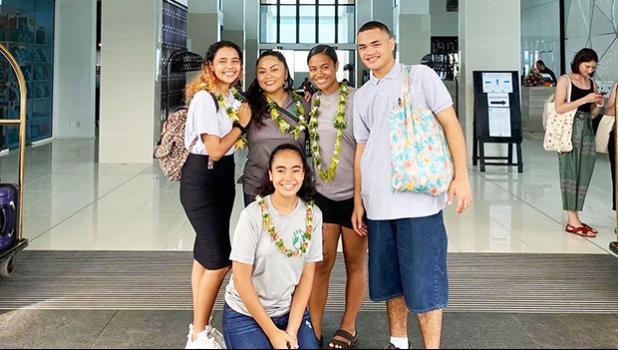 Pago Pago, AMERICAN SAMOA — Amidst the ongoing panic and confusion around the world with regards to the coronavirus pandemic, in independent Samoa last week, a positive event took place — one that included the participation of young people from American Samoa.

The United Nations Conference on the Rights of the Child lasted a week and was a forum for children from all over the Pacific to voice their thoughts, opinions, and concerns.

The group, hosted by Asian Development Bank (ADB), was asked to attend, specifically, the last day of the conference, which featured discussions on climate change.

Chosen through their participation in the student-led climate advocacy group “Finafinau”, the group members were able to share their own experiences with climate change — both from within the advocacy group as well as their personal lives.

While youngsters from around the Pacific were invited to attend the 84th Extraordinary Session for the Committee on the Rights of the Child, American Samoa was the only international group that made it. Travel restrictions made it difficult for other countries to attend.

According to Suluai-Mahuka, the local group spent their day absorbing information provided by climate activists/presenters from around the world, who touched on topics such as climate litigation, examples of cases taken up by children against their state/country, climate resilience, what causes climate change, and how to combat it.

Suluai-Mahuka reports that the older attendees/presenters at the conference included Supreme Court judges from New Zealand, representatives from ADB, and representatives of climate groups from other islands such as Fiji and Savaii.

In the final hours, both Samoan groups were able to sit face to face with 13 members of the United Nations council.

Yasminna Sanchez of American Samoa, and Aniva Clarke of Samoa, were the two students selected to open the meeting and discussion with their speeches on how climate change has affected the world around them.

The council engaged with the two youth groups and asked them questions pertaining to climate change, trying to scope out their views, perspectives, and specific passions.

Suluai-Mahuka said Samuela Lafitaga took advantage of the open discussion and impressed many attendees with his eloquence and wisdom on climate change and the social workings of the world.

The American Samoa group impressed the other attendees so much, that they may be invited to attend future conferences being held in Micronesia, which take place throughout the year, Suluai-Mahuka shared.

The project aspires to raise awareness of the importance of keeping the environment healthy, and sustaining our natural resources, as Pacific islands are extremely vulnerable to climate change and pollution.

Suluai-Mahuka summed it up by saying, “Finafinau aims to provide students with a platform to participate in local, national, and international opportunities to represent our community through youth activism."