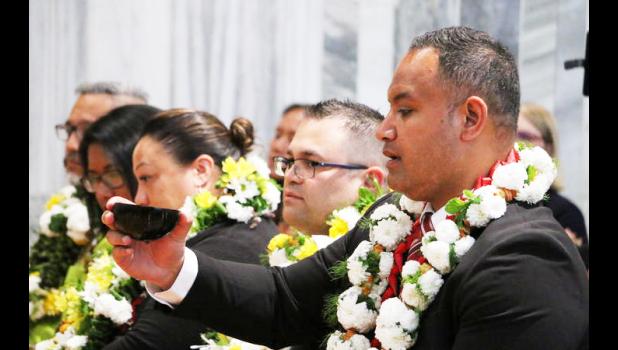 Wellington, NEW ZEALAND — For the first time ever a Turou - 'Ava blessing ceremony has been held at the New Zealand parliament for new Pasifika MPs.

Five new MPs with Pacific heritage were elected this year bringing the total of Pasifika MPs in the house to 11 - the most ever.

Flanked on both sides by 'ei wearing supporters and with joyous Pasifika singing echoing through the lower halls of the Beehive - the five newest Pasifika MPs and their families were welcomed to a blessing ceremony held in their honour and attended by community, church and political leaders.

For first time Otaki MP Teris Ngobi, who is of Samoan and Scottish decent, it was a privilege and honour to be able to celebrate the moment.

"We also get to have a voice for our Pacific people in a place where it really matters and that is parliament. Making those decisions and making those laws for our peoples, so yeah pretty special," she said.

The ceremony was a combination of the Cook Islands Turou, Samoan 'Ava and Christian laying on of hands.

As well as bestowing divine and ancestral blessings, the occasion anointed the Pacific leaders with the love and support of their community and remembered those who came before.

"My mum's from Samoa so when she came over here in 1975, it was with hopes and dreams for a better life for any children she may have later," Terisa Ngobi said.

"So [it is special] to be able to celebrate this moment with her and with the rest of our aiga, our whānau in there, knowing the sacrifices they made including leaving their homes so that we could have a better life."

It is also a very special 'Ava for Takanini MP Anae Dr Neru Leavasa whose brother in Samoa stood in for him at the 'Ava which was conducted to bestow him his Matai title.

"In terms of my priorities it is that I can input and influence the Pacific health and lifting health and well-being for our peoples," Anae Dr Neru Leavasa said.

This year's election has delivered the largest group of Pasifika MPs to parliament and the largest Pasifika Caucus in the Labour Party.

One of the senior Labour MPs, the Minister for Pacific Peoples, Aupito William Sio, presided over the blessing ceremony.

"I think what we are doing here is sending a clear signal to all of New Zealand that Pacific people are an integral part of New Zealand society," Aupito said.

"And therefore here in parliament we're presenting our five new Pacific MPs, Labour and The Green Party, and arming them for the fight ahead."

And there are many battles to fight according to Teanau Tuiono, the Greens' first ever Pasifika MP, who is of Cook Islands heritage.

Tuiono said for him his election is an acknowledgement of what Pasifika have to bring to the table.

"It's a recognition that Pasifika peoples are on the front lines of climate change and that the Green Party is taking that very seriously, he said.

"So it is about the environment, but it is also about people. So I am talking housing, better wages, better conditions, making sure all our families have enough to eat and that they have stable homes. And that all ties into better education outcomes and better health and well-being outcomes."

But the celebration of increased representation of Pasifika in Parliament is somewhat lopsided with both the National Party's former MPs of Pasifika heritage, Alfred Ngaro and Agnes Loheni, losing out in the election this year.

During the blessing ceremony the highest ranked Pasifika MP in government, Carmel Sepuloni, paid tribute to all her former Pasifika colleagues saying that in terms of diversity and representation across the house there is still much to be done.

"This is the house of representatives and so it is important that every political party represents the diversity of our communities," Carmel Sepuloni said.

"It's a proud day to welcome five in here and I am sure without wanting to be political, because that is not what this is about, all political parties should be looking at growing the diversity within their own political parties."

Four out of the five Pasifika MPs who received the blessings of their people on Monday will be presenting their maiden speeches in parliament tomorrow.