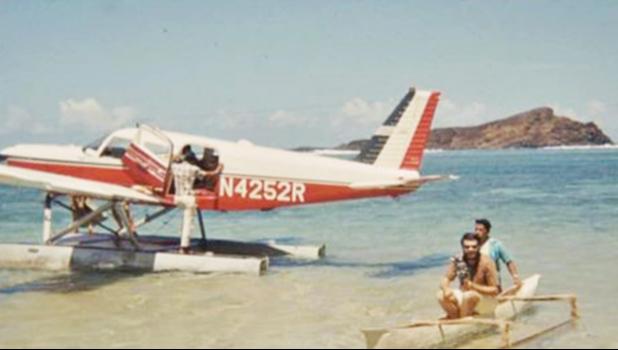 Ofu, MANU'A — Paopao Lele (a Cherokee 6 on floats) in Ofu, Manu’a, was a single engine pontoon plane owned by George Wray that made daily trips to Ofu during high tide and landed on water — this was before there was a landing strip at Ofu. It was a popular gathering spot for FaleLuanu’u people to watch the seaplane land on water.

George Wray started off as a lawyer practicing law in American Samoa when he owned and founded the seaplane. Wray later founded and was CEO of South Pacific Island Airways (SPIA). SPIA served Ta’u, Manu’a from 1973 to 1987.

In 2009 while living in Florida after being badly injured in a plane crash — George was the senior consultant on transportation to former Governor of American Samoa and now Senator Togiola Tulafono.

Wray assisted in the purchase of the MV Fo’isia vessel for ASG, but that’s another story best kept for another day. As my mother told me, “If you can’t say something nice, don’t say anything at all.”

The photo was taken in 1970 by Bill Parsons.