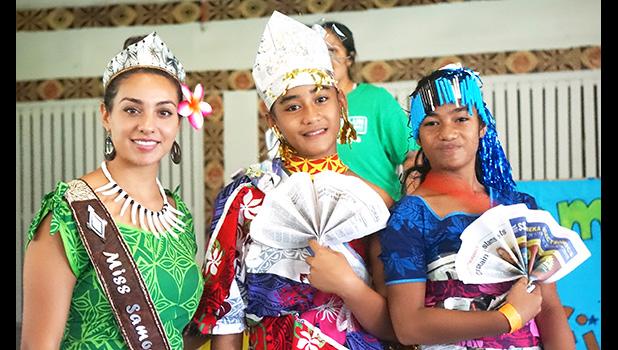 Apia, SAMOA — Preparations for the 8th Annual Girls Leading Our World (GLOW) Conference are underway. This year’s event will bring together the highest number of participants and Samoan counterparts GLOW Samoa has ever hosted.

Over 120 girls and 25 female counterparts, from villages across Upolu, Savai’i, and Manono, will gather in Leauva’a for the 4-day conference, October 1-4. GLOW Samoa began hosting national conferences in 2012, with less than 30 girls in attendance. Because of the growth in popularity for GLOW Samoa, the annual conference has been expanding each year to include more girls and women from across the nation.

Girls Leading Our World is a worldwide Peace Corps initiative that seeks to empower women and girls through holding workshops, conferences, and camps. The GLOW Samoa National Conference will enable girls to further develop leadership skills and confidence while becoming catalysts of change within their own lives and communities.

With support from Women in Leadership Samoa (WILS), a 3-year joint program implemented by the United Nations Development Programme (UNDP), UN Women, with funding from the Australian Government in partnership with the Government of Samoa, each day of the conference will have a designated theme in accordance with the 3 pillars of GLOW: Careers and Education; Healthy Bodies and Healthy Minds; and Ending Violence Against Women and Children.

The girls will attend training sessions and activities implemented by influential Samoan women and organizations, and hear from speakers who will share advice and success stories. At the end of the sessions, the girls will participate in goal setting and leadership activities to help them develop ideas for how to take these messages back to their villages, schools, and local GLOW clubs.

Meanwhile, the adult female counterparts in attendance will be participating in parallel sessions that will run in observance with the themed days. These sessions will be focused on how they can lead and implement club meetings and activities that align with the GLOW pillars, as well as build their capacity for leadership so that GLOW clubs can continue independently in the future.

“This year’s conference is exciting because it is going to be our biggest one yet.” Whitney Koelling, president of the GLOW Samoa board shared. “What makes it even more exciting is how much interest there is in the community towards our initiative. Through a common goal of increased female leadership in Samoa, we have been able to work with individuals and local organizations who are passionate, as well as committed to our mission.”

GLOW Samoa has worked alongside partners at SSAB and UN Women to develop the beginning stages of an advisory board, which will be comprised of Samoan leaders who are invested in GLOW Samoa’s mission and goals. The advisory board will work towards making this a more sustainable initiative going forward.

Initial members of the developing advisory board include Papali’i Mele Maualaivao of UN Women, and Tofilau Fiti Leung Wai of Samoa Stationery and Books. “We are so glad to see the growth and expansion of GLOW,” said Papali’i, who has been involved with the GLOW Conference since its inception in 2012. “[W]hen young women see other women in leadership roles, women they admire, it is easier for them to believe in themselves and be encouraged to pursue their dreams.”

“I am humbled and grateful to be a part of GLOW’s advisory board where I will contribute as best I can,” said Tofilau Fiti. “GLOW’s mission statement is to strengthen the leadership skills of the girls and women of Samoa. This resonates with my passion for empowering women as I am a strong advocate for education and promoting women leadership in Samoa.”

GLOW Samoa initially introduced local clubs to the GLOW model in 2016, being the first country in the world to implement this strategy within the global GLOW initiative. When GLOW clubs were introduced to Samoa, there were fewer than 10 clubs operating nationwide. As of today, GLOW Samoa features 27 clubs from Upolu, Savai’i, and Manono.