“Honoring All Who Served” — Nov. 11 is Veterans Day 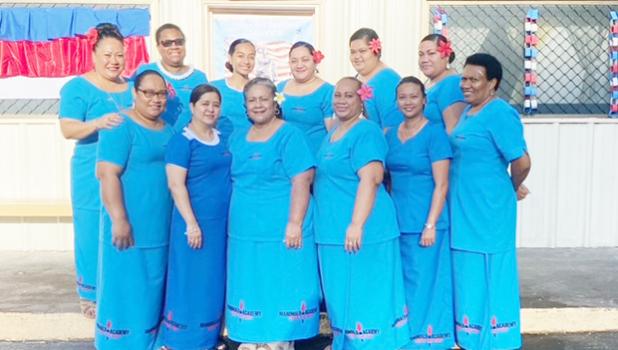 “Veterans Day is a time to honor and thank the brave men and women who have dedicated themselves in service of our great Nation,” the governor said in his Nov. 5th memorandum declaring tomorrow a Veterans Day holiday for the territory — and it is also a federal holiday.

“I encourage you all to take time to reflect on the many freedoms and liberties we share, but also the price of those freedoms,” he said, noting that all ASG employees are excused from their duties.

The governor is expected to lay wreaths at the Memorial Monument tthis morning, and then at the Satala cemetery.

Many in the private sector are closed today, along with the local financial institutions while StarKist Samoa — the territory’s largest employer — and a few major store-outlets remain open for business.

In honor of Veterans Day, Samoa News is not publish a print edition today and the office is closed. We’re here at the website and also on Facebook. The print edition will return on Friday.

Sailors from the Navy’s USS Hawaii were honored at Military Night, featuring the University of Hawaii vs San Diego State Football Game.
In addition to hosting and the recognition to all active duty and veterans in the crowd, the UH Rainbow Warrior Football Team wore unique game jerseys recognizing the 80th Anniversary of the Attack on Pearl Harbor and the 1941 Hawaii Football Team. The University of Hawaii Rainbow Warriors were defeated by the San Diego State Aztecs 17-10 at Clarence T.C. Ching Complex, Manoa, Honolulu, Hawaii. [Photo: Barry Markowitz, courtesy Bluesky Communications]

“We are privileged in American Samoa to have many Veterans throughout our community and churches, and whether their leadership is formal or informal, they contribute wisdom and dependability in many ways,” she said. “I have the humbling opportunity to serve on the House Veterans’ Affairs Committee, where we are blessed to be more bipartisan and united in purpose than some other areas of Congress. The nation has a lasting commitment to our Veterans including health care, the availability of mental services for any such needs, along with recognition and true appreciation.”

In addition to Congresswoman Amata’s work on Veterans’ services appropriations, which have been at record funding levels the past several years, she has worked on more specific efforts to honor Veterans and bring them joy. These include cosponsoring the PAWS for Veterans Act, pairing more Veterans with service dogs in training or fully trained; the Veterans in Parks Act, honoring Veterans as VIP’s at any National Forest or National Park, and communicating the need in a meeting at Tripler for a Benefits Counselor based in American Samoa.

“We’re seeing progress, and always working on efforts to reduce backlogs, and continue to modernize the VA,” she concluded. “Thank you to our Veterans, your service brought honor to American Samoa, and may God be with and bless each of you.”